NEIL LENNON made personal and club history as Celtic beat Hearts in the Scottish Cup Final at Hampden on December 20 2020.

The all-conquering Hoops claimed their TWELFTH successive domestic honour and the phenomenal quadruple treble when they took the silverware 4-3 on penalty-kicks following a dramatic 3-3 extra-time draw with the Edinburgh outfit. Kristoffer Ajer lashed in the decisive goal with a ferocious effort past former team-mate Craig Gordon.

On a truly memorable occasion, Lennon became the only individual in Celtic history to have won a clean sweep as a player AND a manager.

TWELVE IN A ROW…Kristoffer Ajer blasts in the winning penalty-kick past Hearts keeper Craig Gordon to seal the astounding quadruple treble.

The Irishman, now 50, still had the tenth successive title in his sights that December afternoon five days before Christmas at the national stadium. The champions were trailing in the race, but with with a second half of the campaign still to be faced, he was confident of success.

Lennon could not have known the Scottish Cup triumph over Hearts would be his last hurrah as Celtic manager.

The Hoops gaffer said at the time: “I couldn’t be more happy. It’s quite unique and we’ll probably never see the likes of this again in our lifetimes.

“It’s just a shame there weren’t people here to witness what was a great Cup Final,

“I said before the game that we were coming up against a very, very good team and it shows just how difficult it is to win trophies. We were pushed all the way by a very good side. 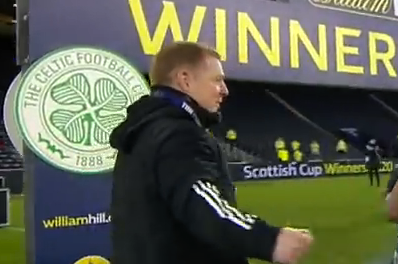 WINNER…Neil Lennon samples silverware success for the last time as Celtic manager in the delayed Scottish Cup Final in December 2020.

“Bear in mind the weight of expectation and the burden that the players have been under to achieve this accomplishment.

“For all the success we had in the late sixties, these guys have won trebles now four seasons in a row. It’s just incredible.”

Two months and four days later, Neil Lennon was out of a job.

Extraordinarily, that remains the case today, exactly a year after his Celtic exit.