Celtic Quick News on News Now
You are at:Home»Latest News»LENNY AND THE BLAME GAME
By CQN Magazine on 1st March 2020 Latest News

NEIL LENNON admits it is his job to “pick up my players” before this afternoon’s tricky Scottish Cup quarter-final hurdle against St Johnstone at McDiarmid Park.

The manager also defended his team formation that saw Celtic topple out of the Europa League as they crashed 3-1 at home to FC Copenhagen on Thursday night.

Lennon has seen his side score TEN goals in two games against the Perth outfit in this campaign – 7-0 in a Flag Day romp at Parkhead in August and 3-0 on their travels last month – and goes into the tie with a remarkable THIRTY-THREE winning sequence of games in domestic knock-out competitions behind the team.

He could return to the 3-5-2 system that sees Odsonne Edouard partnered by Leigh Griffiths up front and a tactic that has worked well in most games since the team came back from the winter break. 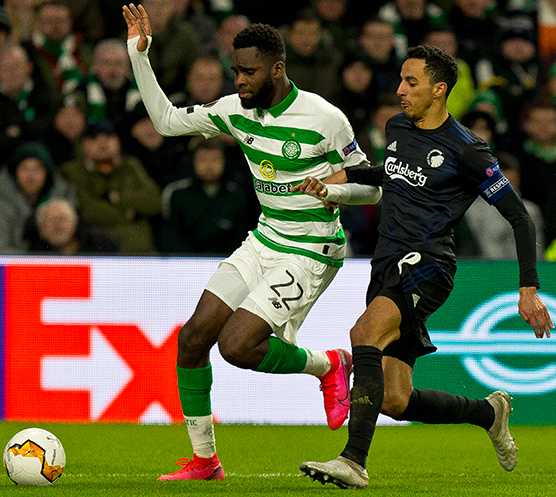 ON HIS OWN…Odsonne Edouard takes on a Danish defender in the disappointing home loss.

The Irishman reverted to a 4-2-3-1 set-up against the Danes with the Frenchman on his own for 70 minutes before the Scotland international forward replaced the tiring Mohamed Elyounoussi with the Hoops already a goal down following a howler from Jozo Simunovic which allowed Michael Santos to get the crucial opening strike.

Lennon, speaking to the Sunday Mail, said: “I don’t know how you can blame the formation on individual errors. We were in total control of the game.

“The opposition defended heroically at times and their keeper made some really good saves.

“We got back into the game deservedly, but then, 83 seconds later, we’ve conceded a goal. It was really hard to take.

“We only have ourselves to blame. We let ourselves down on the game management. It was unnecessary. The third goal was academic. The second goal was the one that won Copenhagen the tie. 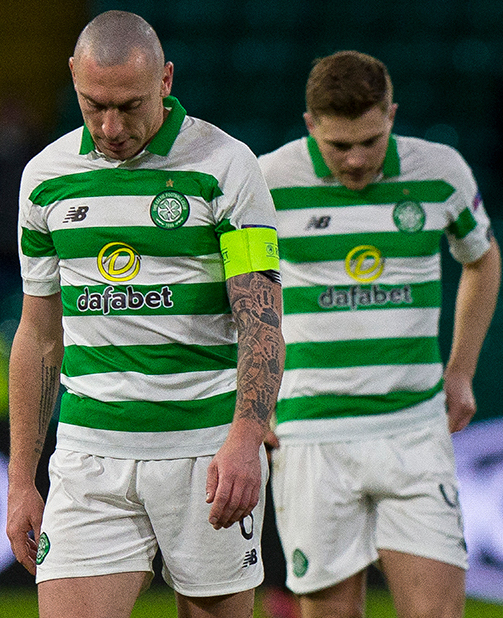 END GAME…skipper Scott Brown and James Forrest bow their heads in defeat at the end of a miserable evening at Parkhead.

“But I’ll do everything I can to pick up my players. Does it add pressure on the players to win the St Johnstone game? I don’t know. Maybe. I haven’t really thought about that.

“The team was right. But when you give goals away in the manner that we did then we give oxygen to the opposition and give them something to hold on to.

“We had to concentrate and manage the game, but we didn’t do that anywhere near as well as I expected them to.”

Celtic go into this afternoon’s encounter knowing they are only three wins away from winning the trophy for the fourth consecutive season.

And with the League Cup already in the trophy cabinet and a 12-point lead in the Premiership, the club is on the brink of a historic quadruple treble.

There is no room for error in Perth today.