Celtic Quick News on News Now
You are at:Home»Latest News»LENNY AND THE DOOMSDAY SCENARIO
By CQN Magazine on 13th April 2019 Latest News

NEIL LENNON has scoffed at his so-called Hampden hoodoo as he prepares his Celtic team for tomorrow’s Scottish Cup semi-final against Aberdeen.

In his first stint as Hoops manager from 2010 to 2014, the Irishman lost three semi-finals and two Finals and, as Hibs gaffer, he also suffered defeats against Brendan Rodgers’ Hoops side and Derek McInnes’ Dons in last-four encounters.

Reflecting on past performances at the national stadium, the interim boss, speaking to The Scotsman, said: “A lot has been made of that this week, but I can’t get those games back and in a few of them we should have won, but we didn’t.

“Call it Lady Luck or a curse or whatever, I’m not into that superstitious stuff. Sometimes, it’s just what happens on the day. I don’t think we played badly in any of the games at all and I won two out of four [Scottish] Cups.

“It’s all right, but compared to Brendan, it’s not because you have to be perfect to match that record.

“It’s about me just working for the players and helping them get over the line and achieving something very, very special.”

Lennon answered the SOS from the champions in February when Rodgers suddenly departed for Leicester City with the club within touching distance of the unprecedented treble treble. 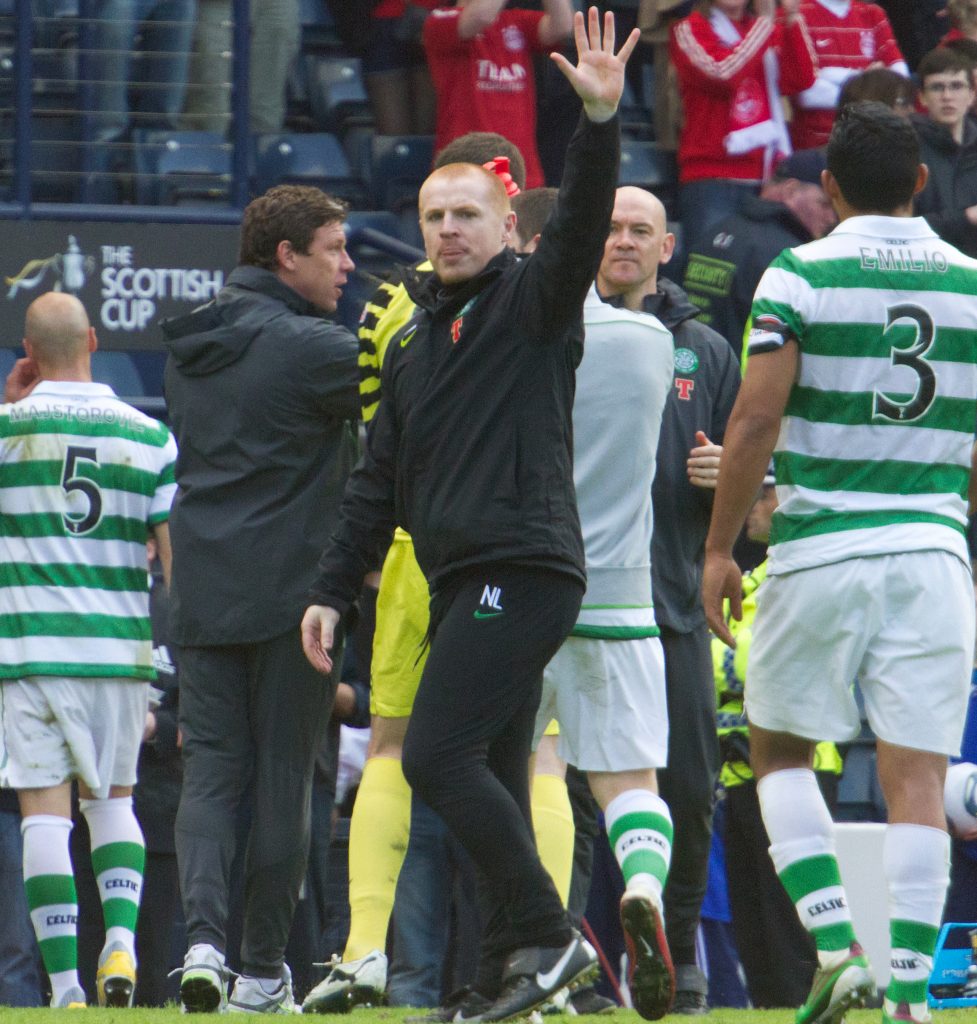 WELL DON…Neil Lennon salutes the Celtic fans after his side’s 4-1 semi-final win over Aberdeen at Hampden in January 2011.

The former Hoops chief made a triumphant return 24 hours after his appointment as a goal two minutes into stoppage time from Odsonne Edouard handed the team three precious points against Hearts at Tynecastle as they remained on course for an eighth successive crown.

Three days later, Lennon skilfully negotiated the team a dangerous quarter-final of the national trophy when goals from James Forrest and Scott Brown against Hibs at Easter Road set up tomorrow’s showdown.

The team are unbeaten since his arrival seven games ago, but they failed to impress a week ago in a drab scoreless stalemate against Livingston in Glasgow.

Lennon added: “A 0-0 draw at home and all of a sudden it is a Doomsday scenario. That’s something I can’t control. I am in charge with my staff, but it’s all about the players and they’ve got four games to complete something that would be really historical, so that’s our focus.

“Now they’ve done two and they’re on the cusp of a third. It’s fantastic what they’ve done for the domestic game.

“Everybody wants to beat them and they overcome all those obstacles and challenges and they just keep going.

“It must be fatiguing mentally and physically at times and we’ve probably seen a little bit of that, but when the big games come they really sharpen their minds again and focus.

“I look back on some of the games we lost [in my time as Celtic manager]and the Kilmarnock one in the League Cup Final we should have been home and hosed before they scored.

“You think: ‘Is it a psychological thing?’ There was a 3-2 defeat to St Mirren in a semi-final when we missed a penalty and that changed the psychology when we were well on top.

“But whatever I missed Brendan obviously remedied with this squad of players. I might be giving him a call tonight or tomorrow just to get a bit of advice from him…”