Celtic Quick News on News Now
You are at:Home»Latest News»LENNY AND THE WOW FACTOR
By CQN Magazine on 4th August 2019 Latest News

NEIL LENNON rated Celtic’s seven-goal destruction of hapless St Johnstone as a 10 out of 10.

The champions celebrated their eighth successive Flag Day with a pulverising performance against the Perth side who were blown away at Parkhead, as reported in CQN yesterday.

Ryan Christie took centre stage with a breathtaking hat-trick while Mikey Johnston, who kicked off the rampage, Olivier Ntcham – with his first touch of the ball! – Odsonne Edouard and Leigh Griffiths contributed the others as Tommy Wright’s players wilted under the ferocious 90-minute onslaught.

A delighted Lennon, speaking to the club website, said: “That’s a perfect performance in every aspect of our play. A clean sheet, two attacking full-backs, great in midfield. There was a relentless aspect about our play today which I enjoyed.

“The subs were fantastic, too, and made a great contribution. I loved the last three goals. They were great all round and I loved the connection between the players and the fans, as well.”

Lennon applauded his players and added: “Is there more to come? I’d like to think so. Ryan Christie is unquestionably a top team player here. He’s got great enthusiasm and stamina and, not only that, he’s got immense talent. 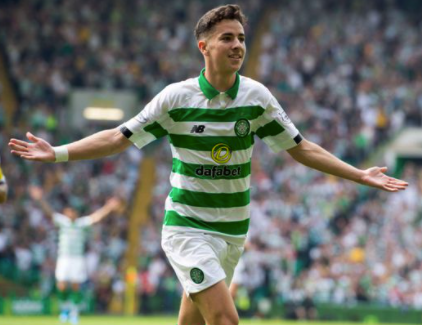 THE START OF SOMETHING GOOD…Mikey Johnston scores the first Premiership goal of the new season.

“We’ve got goals in Odsonne Edouard, James Forrest, Scott Sinclair, Callum McGregor and Ryan and that pleases me. We’re not one dimensional in terms of where the goals are coming from.

“We’ve defeated a very good and rugged St Johnstone team. The players do the talking. We’ve had a real intense period with the Champions League games and we’ve got another big one on Wednesday.

“That game will be a totally different challenge for us, but for an opening game of the season, seven goals… just, wow.”

The only sour note on an excellent start on the road to nine in a row was the injury to new Bhoy Hatem Abd Elhamed who was making his debut following his £1.2million move from Hapoel Be’er Sheva.

The Israeli right-back looked to be forging a an immediate understanding with Forrest on the flank and the fans loved the sight of the defender powering forward at every opportunity.

Unfortunately, Elhamed limped off early in the second-half to be replaced by Anthony Ralston and now faces a race to be fit to play against Cluj in the Champions League third round first leg qualifier in Romania on Wednesday.