A hat-trick from on-fire Ryan Christie and other strikes from Mikey Johnston, Olivier Ntcham, Odsonne Edouard and Leigh Griffiths blasted the champions in the direction of the coveted nine in a row.

However, there was no sign of the £2million Ukrainian raider in Lennon’s 18-strong player squad for Flag Day at a packed Parkhead.

Shved, who was loaned back to his club side following January’s transfer and only kicked off his Hoops career this summer, scored a dramatic debut goal after coming as a late substitute in the 2-0 Champions League qualifier against Nomme Kalju in Tallin during the week. 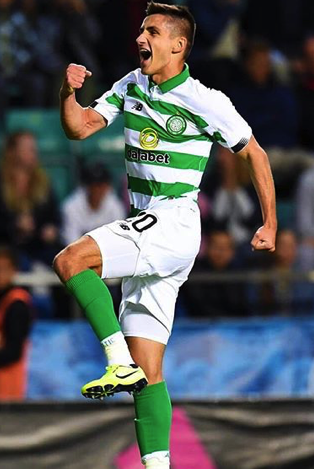 Home fans were eager to have their first look at the winger in the flesh against the Saints, but the nearest the player got to the pitch was a place in the stand.

Lennon, speaking to the Sunday Mail, explained: “With Jozo and Jullien out, I needed to bolster the bench with defenders just in case and that proved right with the injury to Elhamed.
“But Marian should be back in the squad. He’s only played 25 minutes in the last few weeks and I’ve got good depth there.

”I hope he will be back on Wednesday, but I can only pick 18 players.”

Lennon is now preparing his team for the trip to Romania to take on Dan Petrescu’s Cluj in the first leg of their third round Champions League qualifier in midweek.