The Irishman’s decision back-fired dramatically as the Romanians won 4-3 at Parkhead to go through to the play-off stage against Slavia Prague.

The Hoops, after a solid 1-1 draw away from home in the first leg, were left to count the cost – around £15million for a start – as they toppled into the Europa League.

Lennon took McGregor out of his influential role in the middle of the park to play as a left-sided defender and paid a heavy price as the Scotland international’s art and craft were missing against the visitors.

Sutton, speaking in the Daily Record, said: “You have to say Lennon took a gamble and left himself wide open. But he’s not the only one culpable.

“The decision to play Callum McGregor at left-back was a mistake. That’s not hindsight. The evidence was already there.

“When Celtic went to Ibrox last December, Rodgers did the same thing and it was a glaring error.

“It ruined the balance of the team and seemed to mess with their heads. The rest of the players weren’t at it at all, as if bewildered as to why the manager would take their best midfielder out of the engine room and stick him at full-back.

“Lennon couldn’t understand why his team was so poor and passive during the first-half against Cluj. I might be wrong, but I can’t help thinking it was the same again.

“And John Kennedy should have been telling him this. He was standing beside Rodgers at Ibrox when it fell apart.

“If I was McGregor then I’d be devastated. This is a boy who was wanted by a top-half Premier League team because of his midfield talents and told he couldn’t leave because he was too important to Celtic. 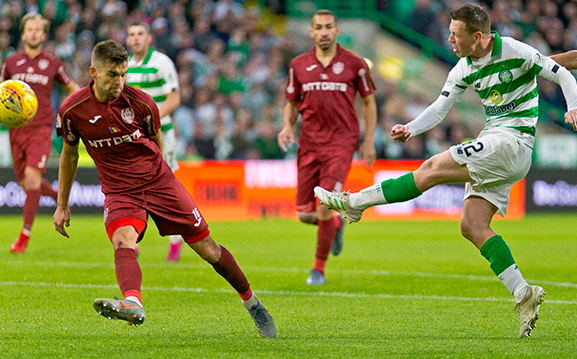 “Yet he ends up shunted out of his best position in a huge game. It killed him and you would imagine it has done the same to Boli Bolingoli-Mbombo.

“Signed as the left-back for £3million, it was a move which must have told him that he couldn’t be trusted in the big game.

“It’s all right defending the boy in public as Lennon did last week. That’s commendable, but it unravels if the next move is to drop him.

“There was an uncertainty about the whole night and I’m convinced it stemmed from there.”

Former gaffer Rodgers made an identical decision against Steven Gerrard’s side at Ibrox just before the turn of the year when he played McGrgor at full-back and had a half-fit Kieran Tierney stripped and on the subs’ bench.

His game-plan fell apart when he had to replace the injured Filip Benkovic in the first-half and the champions, looking for their eighth successive title, produced their worst performance of the campaign as they lost to a deflected shot from Ryan Jack.

McGregor produced little that afternoon as the midfield was swamped and three points were surrendered.

Now, after the same decision from Lennon, the Hoops have seen their chances of Chamions League participation obliterated.