Celtic Quick News on News Now
You are at:Home»Latest News»LENNY DELIGHTED TO MISS OUT ON DEAL
By CQN Magazine on 29th July 2019 Latest News

The Celtic playmaker is the one that got away and the Hoops boss couldn’t be more happy.

Lennon targeted the 24-year-old Scotland international a year ago as part of the deal that could have taken John McGinn to Parkhead, but Christie was not tempted.

It’s history now the Easter Road midfielder moved to Aston Villa, the Highlander came on against Hearts in the League Cup semi-final at Murrayfield in October and turned the tie upside down, agreed a contract extension shortly afterwards and was in the form of his life before his season came to a brutal end following a reckless mid-air assault from Dom Ball in the 3-0 win over Aberdeen in the Scottish Cup-tie in April.

Christie missed out on the unprecedented treble treble run-in, but has hit the ground running in the new campaign as he looks to make up for lost time.

Lennon and the smooth operator did join up in February, of course, when the Irishman returned to the champions after the sudden departure of Brendan Rodgers to Leicester City.

The gaffer, speaking to the Daily Record, said: “I wanted Ryan at Hibs as part of the McGinn deal – if it was going to happen – as I’d been greatly impressed with Ryan at Aberdeen. 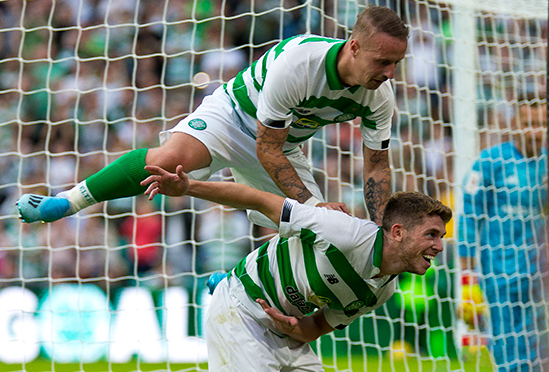 HOOP HOOP HOORAY…Ryan Christie takes a bow after his first goal against Kalju with Leigh Griffiths joining in.

“Thankfully, that didn’t happen – he took his chance with Celtic when it came along and hasn’t looked back.

“We looked at a lot of footage of him this time last year when I was the Hibs manager and we came up against him when he was on loan at Aberdeen.

“We knew his capabilities. A lot of the time Brendan or Derek McInnes would play him in a midfield three.

“There’s that string to his bow where he can play in a number of positions. I like to see him a little bit more advanced in the No.10 role as he can play as an attacking midfielder, no problem.

“I want him in attacking areas because he can open up defences and has goals in him, as well.”

Christie has already put down his marker for the rigours ahead and looked bright and lively in the 5-0 triumph over Nomme Kalju at Parkhead in midweek that just about renders tomorrow’s Champions League second round return leg in Estonia meaningless. He tucked away a sweet penalty-kick in the first-half and swept in an exquisite second as the Hoops set out to kill the tie.

Lennon added: “Considering it’s so early in the campaign, Ryan is just full of energy. I loved his second goal because he can do more of that.

“Ryan really meant it and it comes with confidence. He’s trying to make things happen.”