LEIGH GRIFFITHS remained at home with a hamstring strain as Celtic arrived in Copenhagen last night for the Europa League last-32 confrontation with the Danish champions this evening.

Neil Lennon took no risks with the crocked comeback Bhoy who sustained the injury in the final training session before the flight for the first leg meeting with FC Copenhagen which has a 5.55pm kick-off.

Twenty-nine-year-old Griffiths has claimed four goals in eight starts since the turn of the year, but the nearest he will get to the action in the Danish capital will be watching it on his TV at home.

Lennon insists the setback to the Scotland international frontman will not jeopardise his plans for the Parken Stadium encounter as he prepares for a positive result before the return at Parkhead a week tonight.

The Hoops gaffer, speaking to the Daily Record, said: “Griff picked up a hamstring twinge in training, so we didn’t take the risk of asking him to travel. We hope he’ll be okay for the weekend. It is a blow with the form he’s been in.”

Asked if the attacker’s absence altered his formation, Lennon replied: “No, it doesn’t. We have been very flexible, even ‘in-game’ on Sunday. 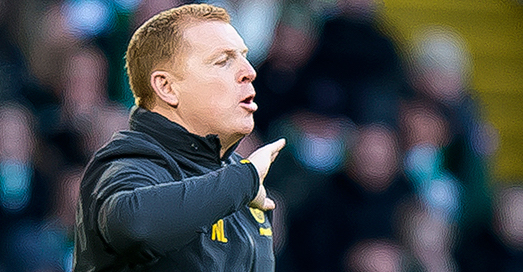 “We will see how the game’s rolling. It’s not trying to be smart or clever or do something different, it’s just trying to find a way to win the game.”

Lennon will also be without injured full-backs Greg Taylor, who lasted only 25 minutes before limping off in the 2-1 win over Aberdeen at the weekend, and Hatem Abd Elhamed, who has been sidelined since his groin strain against Lazio in November, but is confident that his team can come up with a big performance.

The Irishman, whose players will be the first Scottish side to encounter VAR in the Euro showdown, added: “There has been calmness, good maturity, good control at times and I’m hoping for more of the same as we have to make sure we take a result back to Glasgow.

“It’s a difficult venue. Defensively, they are really well set up and they are a difficult team to break down at times.

“It will be cagey and we have to make sure we don’t lose concentration and get done on counter-attacks, but I’d like to think we will have our fair share of the ball, as well.”