NEIL LENNON is poised to name his former Celtic assistant Gary Parker as his new No.2 at Omonia Nicosia.

The ex-Hoops boss, who had been out of work since departing Parkhead on February 23 2021, has agreed a two-and-a-half year deal with the Cypriot outfit.

Lennon, 50, was immediately linked with ex-Celtic prospect and team-mate Mark Fotheringham, who spent two years at Anorthosis Famagusta as a player, but the move collapsed. 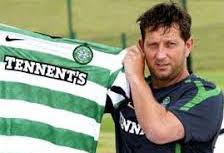 GREEN FOR GO…Gary Parker during his days as assistant to Neil Lennon at Celtic.

Terms could not be agreed and the Northern Irishman swiftly switched his attention to 56-year-old Parker with whom he also shared a dug-out at Bolton and Hibs, as reported in the Scottish Sun.

Lennon will act swiftly to get in move to get his one-time Leicester City colleague in place with Omonia due to play a league game against Doxa at the weekend.

He also faces a tie in the national Cup against AEL the following midweek.