THERE are mixed messages coming out of Parkhead with Jeremie Frimpong about to quit in a £11.5million move to Bundesliga outfit Bayer Leverkusen, as CQN reported yesterday.

Neil Lennon, who is preparing his players for this evening’s Premiership encounter against Hamilton Accies at Parkhead, admitted he felt “let down” by the 20-year-old Dutch ace.

He also stated he thought the player had “come off it a little bit” in recent games and may have been “distracted by all the speculation”.

The manager insisted the champions had hoped to pin down the right-back on an enhanced contract after his £300,000 arrival from Manchester City on transfer deadline day on September 2 2019.

But Frimpong marked his impending exit with a cryptic note on Instagram that said his “demands haven’t been met”, despite signing a four-year deal 18 months ago. The transfer fee rose to £1million for a player who never got near the City first team and the Etihad outfit are due something in the region of 20 to 30 per cent of the profit on the sale.

The Amsterdam-born youngster became an overnight sensation with the Hoops followers after his rousing debut in the 5-0 Betfred League Cup triumph over Partick Thistle three weeks after his arrival.

His progress was meteoric and attracted the attention of German and Italian clubs, most notably Roma, but it was Bayer Leverkusen who made the offer Celtic could not refuse.

Lennon, speaking to Glasgow Live, admitted: “Yes, I feel a bit let down because we felt we could progress him further and we offered him a new deal which would have kept him here for another two or three years, but it was down to the player’s personal ambition.

“Whether that’s the right way for him remains to be seen. For us, though, from a business point of view – and maybe from a footballing point of view, as well – when a player’s mind is set like that it’s very difficult to bring him back round. 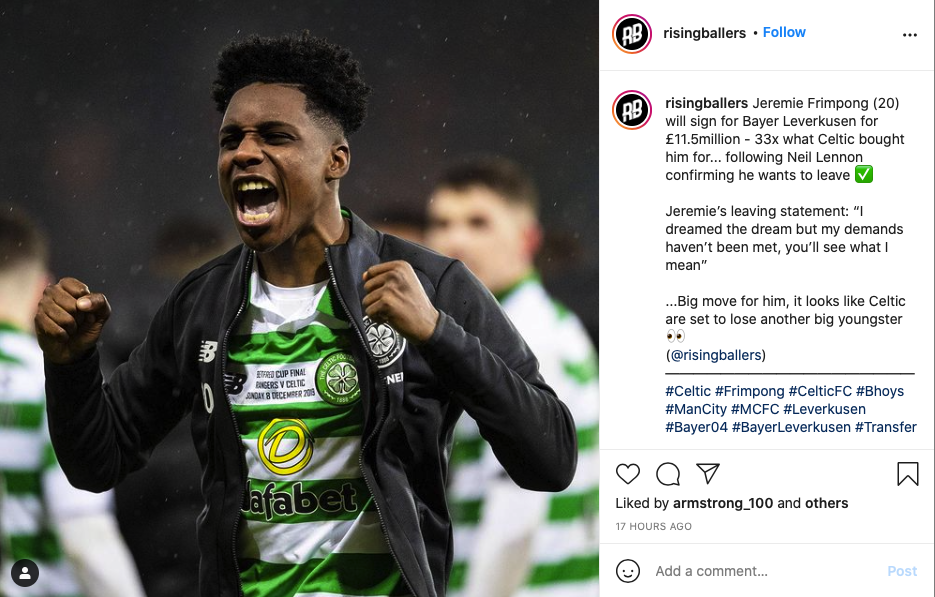 “It didn’t come as a surprise at all. This has been in the offing for the past couple of months. We offered the player talks for a new deal a few months back, but he declined and made it clear that he wanted to leave, despite our best efforts to keep him.

“We’ve received a very robust offer for him and, after talking about it at length, we think it’s the best thing for the club going forward.

“The size of the offer was good business for the club and the fact is that he’d also come off it a little bit in his last few games, as though he’d been distracted by all the speculation surrounding the move.

“It’s difficult when it’s a player you’ve helped to develop. You’re sorry to see him go but, eventually, he didn’t want to stay and progress here. There was a determination about him to go so we took our decision.”

Frimpong’s last appearance was a second-half substitute in the 2-2 draw in Livingston a week ago and he marked his farewell this week with a note on his Rising Ballers Instagram account which read: “I dreamed the dream but my demands haven’t been met, you’ll see what I mean.”

The words are open to interpretation, but one thing is certain is the fact the Celtic fans have seen the last of the player in a green and white hooped jersey.

Lennon has Hatem Abd Elhamed, Stephen Welsh and Anthony Ralston who can fill the No.2 slot, but the Irishman could find a long-term replacement elsewhere and he added: “Obviously, we’re now looking to bring in a right-back.”