Celtic Quick News on News Now
You are at:Home»Latest News»LENNY HAILS HOOPS AS THEY ‘GRIND’ OUT WIN
By CQN Magazine on 16th February 2020 Latest News

NEIL LENNON lavished praise on his Celtic players for winning ugly in awful conditions at Pittodrie this afternoon.

Goals from Callum McGregor and Kristoffer Ajer gave the champions a 2-1 victory over a battling Aberdeen outfit who had drawn level before the interval with a strike from defender Ash Taylor.

The latest triumph maintained the Hoops’ 100 per cent record in 2020 with nine successive victories to remain on course for the phenomenal quadruple treble.

A delighted Lennon, speaking to the club website, said: “I’m thrilled. It’s a massive win in treacherously difficult conditions to play football. All credit goes to the players. They dug out a massive result for us. You can’t always play quick, slick football and they had to grind it out today.

“It’s a good sign to get the result. It shows the character, resilience and that they’re a team. There’s good solidarity within them and they keep going.

“The fitness levels are great, as well, but we’re not getting ahead of ourselves, there’s still a lot of football to be played.

Lennon made some tactical changes in the second-half when he replaced Leigh Griffiths with Ryan Christie in the 58th minute to go to a back four.

Nir Bitton moved to central defence alongside Christopher Jullien and that freed matchwinner Ajer to move to the right.

It helped to turn the game in the Hoops’ favour and Jonny Hayes, who had replaced the injured Greg Tyalor in the first-half, had the opportunity to put the team ahead in the 74th minute. 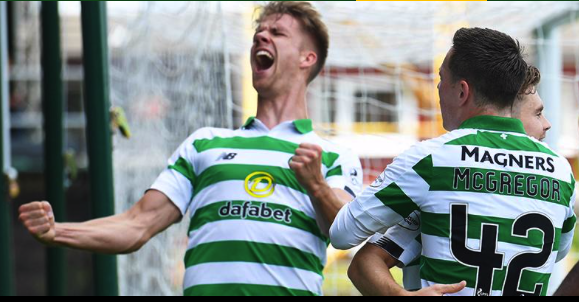 After some good combination play between the Irishman, James Forrest and Odsonne Edouard, the French ace sent Hayes through with only Joe Lewis to beat, but, unfortunately, he elected for power rather than precision and thumped his drive off the keeper.

Thankfully, Ajer displayed more craft nine minutes from the end when he sent the winner hurtling high into the net.

“Jamesy opened the pitch right up and the pass was perfectly weighted. Kris showed a lot of composure to finish it off. It was a great goal and an important goal.

“We didn’t want to drop points, but it was looking like it, and a point at Pittodrie sometimes can be a decent result. In these conditions, the game could have gone either way, but we came up with a really important piece of football.

“The subs we brought on were forward thinking players and the ones who could create something.”

Now all eyes will turn to Thursday and the first leg of the Hoops’ Europa League last-32 confrontation with FC Copenhagen in Denmark.