A STOPPAGE-TIME goal from Odsonne Edouard handed Neil Lennon a winning return as Celtic manager as the champions snatched a 2-1 victory over Hearts last night.

The drama of a tumultuous few days in the club’s history continued in Edinburgh when it looked as though the Hoops’ lead at the top of the Premiership would be slashed to six points.

As Lennon’s men were deadlocked 1-1 at Tynecastle, Steven Gerrard’s side were easing to a 4-0 win over relegation-threatened Dundee at Ibrox.

And then Scott Brown spotted Edouard in a pocket of space in the danger area and picked him out with a neat pass and the £10million Frenchman tucked it away from the helpless Bobby Zlamal.

Craig Levein’s men toiled throughout the second-half following the sending-off of Jamie Brandon for a mid-air assault on Jeremy Toljan just before the turnaround.

Interim boss Lennon had been barely 24 hours in the job after taking over from Brendan Rodgers after his sensational defection to Leicester City in the run-in to what could be an unprecedented campaign for the Parkhead outfit. 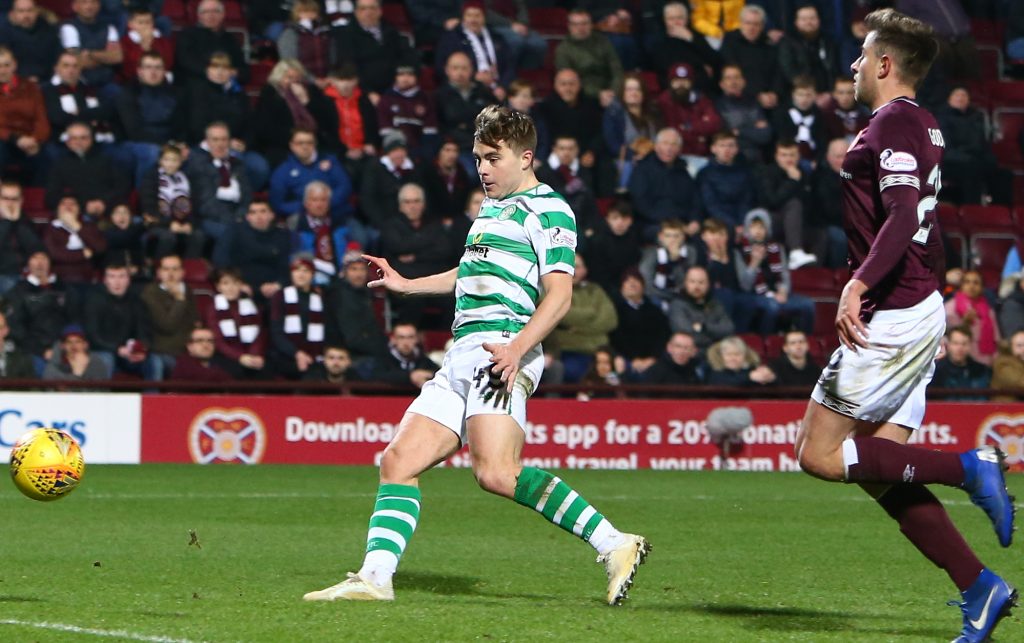 BY THE RIGHT…James Forrest calmly steers in the opening goal following a fabulous passage of play with the Hearts defence carved open.

The Irishman, speaking to Sky Sports, said: “Brilliant! I couldn’t have written the script any better.

“I think we scored a great first goal. We were a bit fortunate because we invite pressure, we overplayed it a little bit too much.

“Second-half, we were a bit too passive with our passing. When we put a decent ball int the box we got a goal. We had to just keep working away at Hearts.

“We shot ourselves in the foot with the way we conceded. It’s sloppy.

“However, it’s a magnificent win. This is such a hard place to come and I’ve got to give Hearts a huge amount of credit because they made the game very, very difficult for us.

“It’s difficult to play against 10 men, but at times our decision-making wasn’t great and our execution of things wasn’t great.

“But I can’t ask any more from the players. You talk about the mentality of the team.

“It’s the sign of a good side that they can keep going and keep going and not get disheartened. It’s turned out to be a great night for me personally.

“But it’s not about me, it’s about the team and it’s a great night for them.” 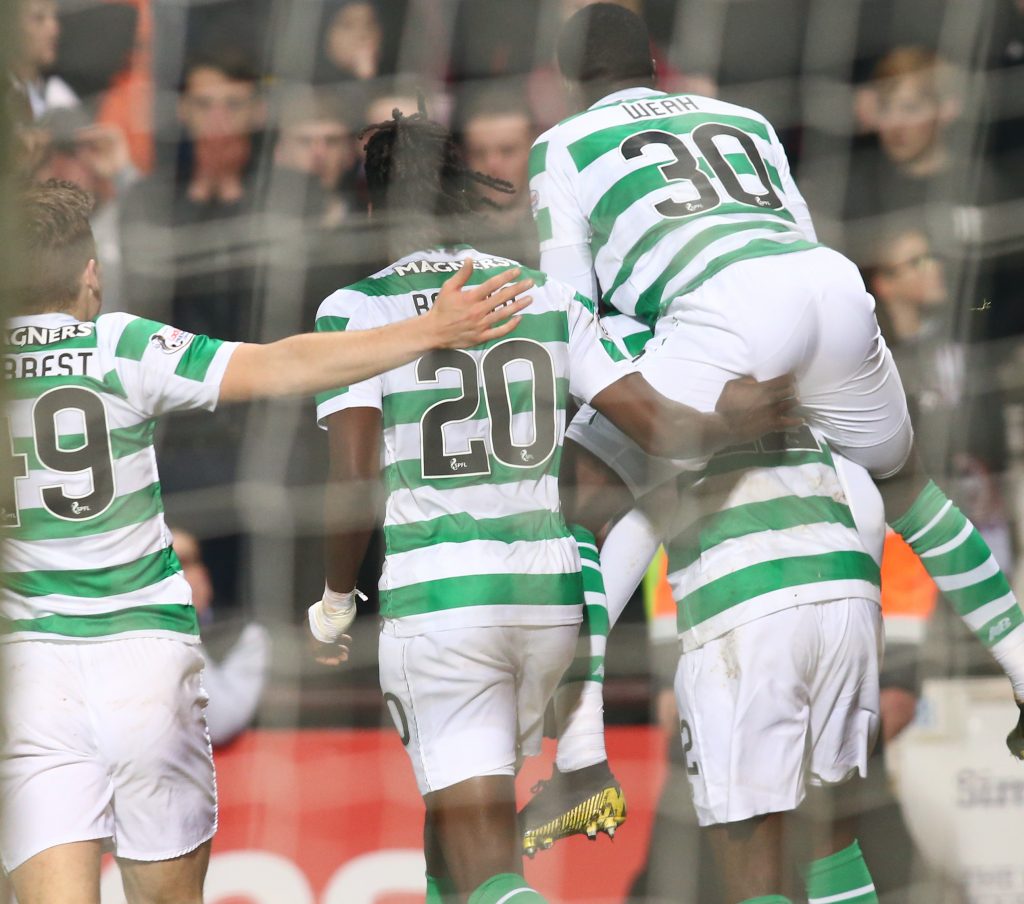 THE GLEE CLUB…Timothy Weah is flying high as he celebrates Odsonne Edouard’s winner with James Forrest and Dedryck Boyata joining in.

James Forrest opened the scoring following a breathtaking breakaway after a magnificently-paced ball from teenager Ewan Henderson to Scott Sinclair who touched it inside to Oliver Burke.

The speedy 21-year-old attacker enticed Zlamal from his goal-line vefore knoicjking a pass across goal that was gleefully thumped home by James Forrest.

But Lennon winced when the Hoops gifted the Edinburgh side a penalty-kick shortly after the turnaround when Scott Bain and Kristoffer Ajer got their signals mixed up and the Norwegian was forced to give away a penalty-kick and Oliver Bozanic sent the keeper the wrong way for the leveller.

And then Edouard popped in the crucial late winner to make sure of a winning return for the 47-year-old caretaker gaffer.

Now the focus is on his former team Hibs in the Scottish Cup quarter-final on Saturday evening and another date with destiny in the capital for Lennon.