NEIL LENNON revealed he thought about Scott Brown as he looked for a No.2 at Omonia Nicosia.

The former Celtic gaffer admitted he was tempted to make an offer to his ex-Hoops onfield leader after his contract was scrapped by Aberdeen earlier in the week.

Mark Fotheringham, another ex-Celt, passed on the opportunity to join Lennon at the Cypriot outfit when a deal couldn’t be struck.

Garry Parker, the Northern Irishman’s one-time assistant at Parkhead, Bolton and Hibs, is now a possibility, as CQN reported.

Brown, 36, who agreed a two-year contract to join up with his ex-Hibs team-mate Stephen Glass at Pittodrie nine months ago, became a free agent in the aftermath of the rookie gaffer’s sacking following the recent Scottish Cup exit at Motherwell.

However, Lennon, who departed the Hoops managerial role in February last year, refrained from making a move for the former Scotland international midfielder and said: “I thought about Scott, I’m not going to lie, but it was just the timing of it – me coming here and Scott leaving his post at Aberdeen. 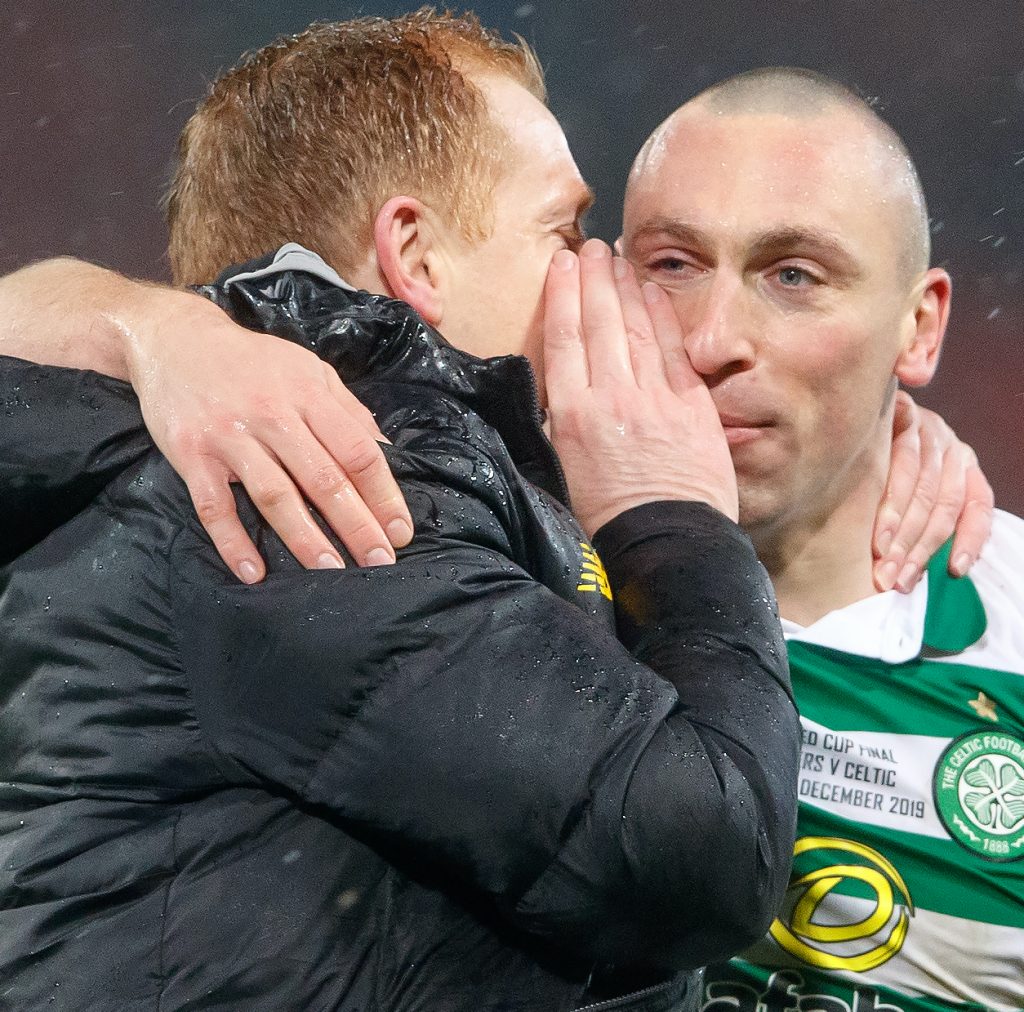 A WORD IN YOUR EAR…Neil Lennon passes on a message to Scott Brown after Celtic’s 1-0 League Cup Final win over their Ibrox opponents in the December 2019 clash at Hampden.

“It’s no secret how highly I regard Broony. He was a wonderful captain for me and I’ve got all the time in the world for him.

“I think he needs a bit of time, a bit of reflection time with his family and he can see what other opportunities there will be for him.

“It’s probably too soon for him to come out and do something like this, anyway, although he’s always welcome to visit.

“It would be great to see Broony if he fancied getting away from it all.”

Lennon, speaking to the Scottish Sun, added: “I hope that people take away all the nonsense that’s said about him and what they think about him.

“Just look at his career from a stone-cold point of view and realise what an absolute legend of the Scottish game he is.

“That’s not a term I use lightly, but Broony deserves that kind of recognition for what he’s done in the game.

“I definitely think I’ll work with him again one day. Maybe Broony can do the top job and I’ll just sit beside him and make the tea!”

Ange Postecoglou has already stated there “will always be an open door” for Broony at Celtic while ex-boss Brendan Rodgers has offered him a pathway into coaching at Leicester City.