CELTIC boss Neil Lennon was involved in a remarkable u-turn as he spoke to the media before Sunday’s Premiership meeting with Motherwell at Parkhead.

It looks as though peace has broken out at the champions following some heated comments after the dismal 2-1 Champions League exit against Ferencvaros in midweek.

A furious Hoops gaffer told his players to get their “mentality right” after the embarrassing downfall against the unseeded Hungarians.

Lennon also revealed it was bugging him how certain players had expressed their desire to leave the club.

But the Irishman had calmed down somewhat when he talked to reporters earlier today. He told the media: “The players have got great mentality and great experience.

“They don’t get too high when things go well or too low when they don’t. We try and keep a balance.

“The best thing they can do is get back out and play.” 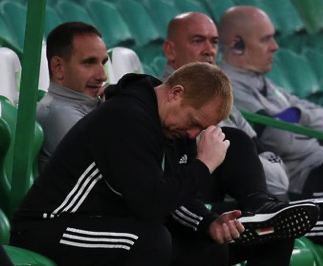 However, Lennon denied anyone had been agitating for a move and said he would be happy if players who had asked about leaving featured for the first team again.

He commented: “Yeah, absolutely. We want them to settle down, we want them just to do what they do best, they’re great lads.

“I understand that sometimes there can be interest, but this is a great club, we want harmony.

“I’m not saying there has been any agitation at all, but sometimes you can lose a little bit of focus.

“So, I’ve said what I said after the game. I don’t need to elaborate on that any more.”

He added: “We have a big year ahead of us and we want (the players) all to settle down and do what’s best for the club.

“That means winning the league and trying to make the best of what’s left of the European campaign.

“We suffered a blow. One of our objectives is gone, but we’ve got plenty of others going forward and we want them all here focused on that.”

Odsonne Edouard, who missed the loss to the Hungarians with a thigh injury, is still out of the reckoning.