NEIL LENNON admitted he had every faith in Celtic scoring the goal that earned a 2-2 draw with Livingston in West Lothian last night.

Substitute Tom Rogic left it late – one minute into stoppage-time – when he converted Odsonne Edouard’s left-wing cross to give the Hoops a stalemate on a dramatic topsy-turvy evening when they went THIRTEEN points clear as they zero in on nine in a row.

Livi had battled back to lead 2-1 following Callum McGregor’s 16th-minute opener, but the late, late goal from the Australian kept the team’s domestic unbeaten record in 2020 intact on the same evening Steven Gerrard’s side were nosediving to a 1-0 defeat against relegation-threatened Hamilton Accies at Ibrox. 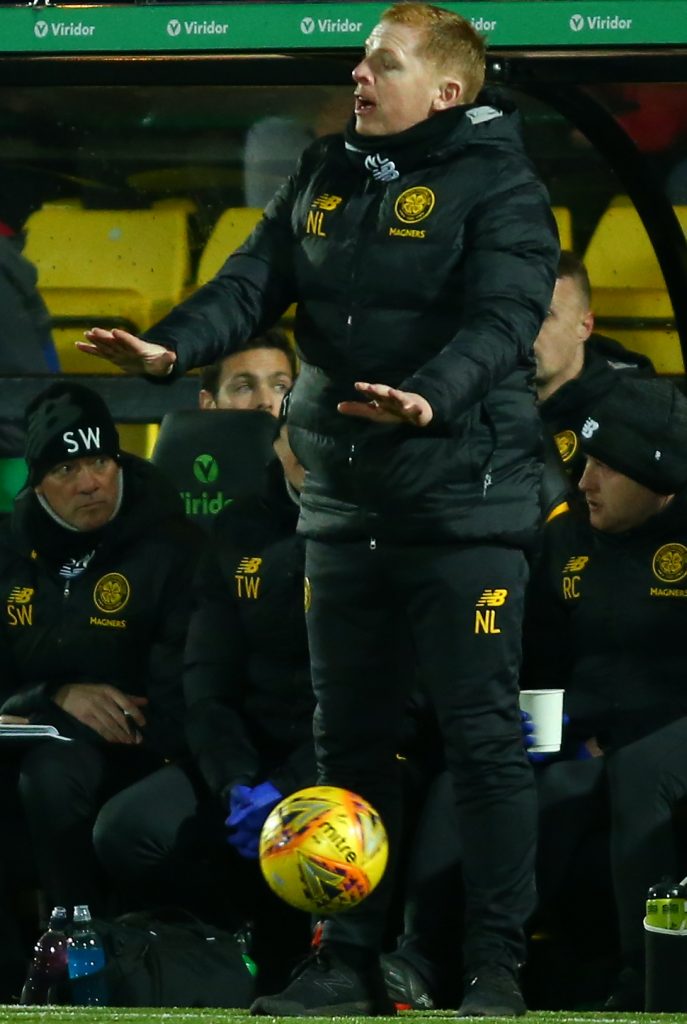 KEEP CALM AND CARRY ON…Neil Lennon gets his message across to his players.

Lennon, speaking to the Daily Record, praised his players and said: “I was pleased with them all. The whole team was brilliant. It is a privilege for me to manage this team.

“I am delighted with the performance. I thought we deserved all three points.

“I was disappointed with manner of their goals. Their first could have been a foul on Fraser, the second was poor from our point of view – but the rest of the game we were magnificent.

“Against a difficult opponent on a difficult pitch, we were absolutely outstanding and I had total belief we could get an equaliser and Tom came up with the goods.

“Livingston were hanging on and we broke them and we got the very least that we deserved.

THE OPENER…Callum McGregor thunders Celtic into the lead with a powerful right-foot drive.

“We dominated for long, long period and I’m sitting here disappointed at the first points we have dropped in 2020.”

Asked abut the title race, the Hoops gaffer reacted: “I’m not talking about that.

“I’m taking it game by game and we have St Mirren on Saturday.

“But you can’t be giving away sloppy goals. You don’t want to be chasing games.

“We set high standards for us and that’s the first points we’ve dropped in 2020, but, in the context of the evening, I suppose it was good.

“It was always going to be a tough fixture, but the way we played pleased me more than anything. We were brilliant, we were relentless. That’s why I am disappointed we did not win the game.

THE LEVELLER…Tom Rogic turns away after his stoppage-time goal.

“I don’t think Livingston offered anything other than long throws and the odd breakaway. We were very entertaining and very good and I’m pleased to get a point.

“We prepared for this game as diligently as we could. We gave Livingston the utmost respect as we had not won here – we had not scored here. But our preparations were good and there was no complacency.”

Lennon was delighted to see Rogic make an impact after replacing Mohamed Elyounoussi in the 69th minute.

He added: “I’m pleased for Tom. He has an knee issue and Astro turf pitches are not his favourite surface. I wanted to start him, but he was not keen. However, we got 25 minutes out of him and he got his goal.”