CHRIS SUTTON insists Neil Lennon is on a collision course as he tries to solve a Scott Brown dilemma this season.

The outspoken former Celtic striker believes the Hoops boss has a problem to sort concerning the team’s 34-year-old skipper.

And he reckons Brown, so influential in the past, could be a major headache for Lennon in a crucial campaign for the club that has dominated Scottish football for three successive years.

The onfield leader has proved on many occasions it is wrong it is to write him off and has come back to answer his critics. Sutton emphasises he does NOT think the former Scotland international captain is heading for the scrapheap. 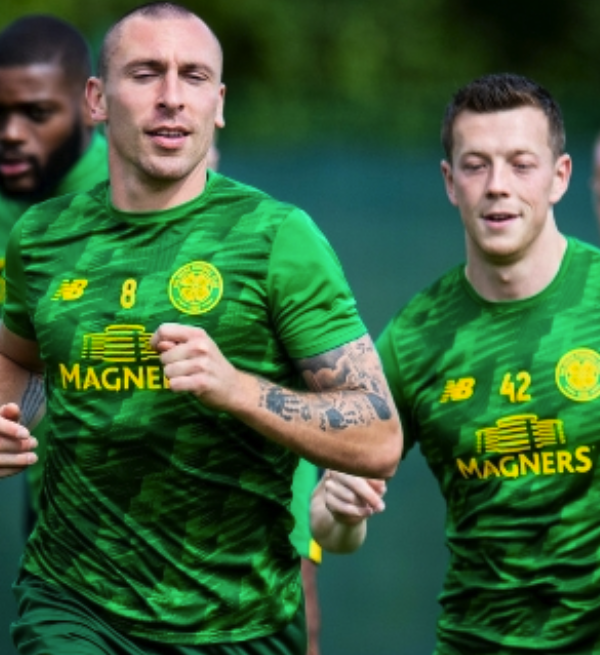 LEADER OF THE PACK…Scott Brown goes through a training routine with Olivier Ntcham and Callum McGregor.

The Englishman, speaking in the Daily Record, said: “Brown’s last two performances at home in Europe against Cluj and AIK have not been up to the standards he’s set over 10 years bossing the Parkhead midfield.

“Maybe it’s just a dip in form, but maybe the time really is coming for him to start being eased out of the action.

“Let’s get one thing straight here. This is not some Brown is finished rant. He laughs himself about the fact critics have written him off time and again and he’s proved them wrong.

“He is not finished. But I also think it’s fair to say there are signs that he may also not be the first name on the teamsheet anymore and that goes for the bigger games, as well. Not just rests against Dunfermline in the Betfred Cup.”

Sutton, Martin O’Neill’s first signing for the club in the summer of 2000 when he paid Chelsea £6million for his striking prowess, continued: “Having a measured look at Brown’s situation is something Lennon will be doing.

“I was critical of him in the Cluj defeat. Against AIK, he did nothing wrong, but I didn’t sense a dominance from him. The dynamism and control didn’t seem there.

PRIZE GUY…Scott Brown with the Premiership trophy at the start of the season.

“He was having to fight for 50-50s that he’d usually stroll away from with his chest puffed out and the ball at his feet.

“There’s no shame in time catching up, it comes to us all. But when you are as important to the club and the squad as Brown is to Celtic, it makes the decisions even tougher for Lennon.

“Especially when at this stage I don’t see anyone who can play his role as well in terms of defensive discipline. There’s the problem. Plenty of supporters point to the fact that Celtic were at their most fluid and stylish last season when Callum McGregor played the holding role behind Ryan Christie and Tom Rogic.

“I don’t disagree with that. It stands to reason. McGregor’s a fast footballer who gets things going quickly and he’s a joy to watch when he’s pulling the strings and it’s working.

“But he doesn’t have the same defensive qualities as Brown. The eye for snuffing out danger.

“Neither does Olivier Ntcham. Nir Bitton is best suited. I am a big fan of his and believe he has something to offer this season and not just as an emergency centre-back. Brown has the ideal profile for the matches against AIK and Rangers away from home back to back.

“My issue is, at this stage of his career, two massive games in three days with the travelling involved returning from Sweden might just be asking too much.” 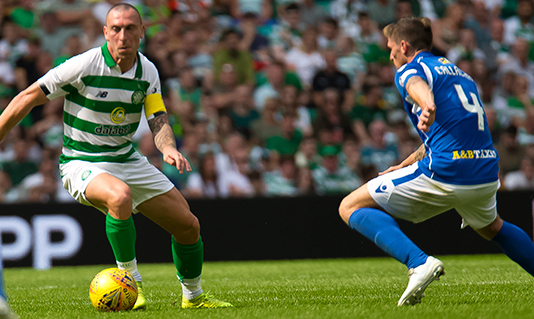 IN CONTROL…Scott Brown in action in the 7-0 romp against St Johnstone.

Former Norwich City and Blackburn Rovers frontman Sutton added: “It’s a huge conundrum for Lennon. He’ll know having him on the pitch in these two massive matches can have a big influence on others, but he also needs to know the skipper will be at peak performance in both encounters.

“Going on the evidence of Cluj at home, AIK in the first leg and one or two games at the back end of last term, that’s not a given.

“His second-half display at Cluj was typical of why Lennon would always want him in the team. He was a real leader, but it’s reaching a point where playing weekend-midweek-weekend is going to be too much, even if Brendan Rodgers sanctioned that two-year contract extension in January.

“You can lead the running every day in training and set the levels, but matches are different. Every player is aware of that and it’s going to be down to player and manager to get the balance bang on.

“Lennon wasn’t born yesterday. He’ll sense when the times are right and wrong.”