Celtic Quick News on News Now
You are at:Home»Latest News»LENNY ‘NO ISSUE’ WITH WARNING
By CQN Magazine on 23rd September 2019 Latest News

NEIL LENNON picked up his first yellow card as a manager following a quick flare up in Celtic’s 3-1 win over Kilmarnock at Parkhead yesterday.

The Hoops boss was booked by referee Greg Aitken as he disputed the late penalty-kick award to the visitors when Scott Brown tackled Osman Sow.

It looked soft and Lennon reacted instantly and fourth official Bobby Madden drew the match official’s attention to the comments by the Irishman.

Fraser Forster made a dramatic diving save to his right to push away Alan Power’s effort from the spot – as reported in CQN’s match summary – and then the whistler ran over to the touchline to flash yellow at Lennon.

The champions’ gaffer disputed the caution, but added he was satisfied by the change in rules allows managers to be warned rather than sent straight to the stands.

Lennon, speaking to the Evening Times, said: “I was a bit disappointed [with the penalty], but I’m not going to criticise the referee for that. I was not happy with the yellow card because I just reacted the same way any other manager would have.

“It’s like a warning to calm down. It’s fine – I’ve no issue with that at all. I was talking recently about not losing my temper. I didn’t lose it that badly, but you get a warning and that’s it. I was voicing my opinion to the fourth official, maybe a bit demonstrably and you’re not allowed to do that anymore, but there’s no real issue there at all.”

The eight-in-a-row title kings racked up their sixth successive Premiership triumph of the campaign to maintain their 100 per cent record and Lennon hailed his team afterwards for “an absolutely superb performance”, despite late injury concerns over Moritz Bauer, who was making his first start, and Christopher Jullien. 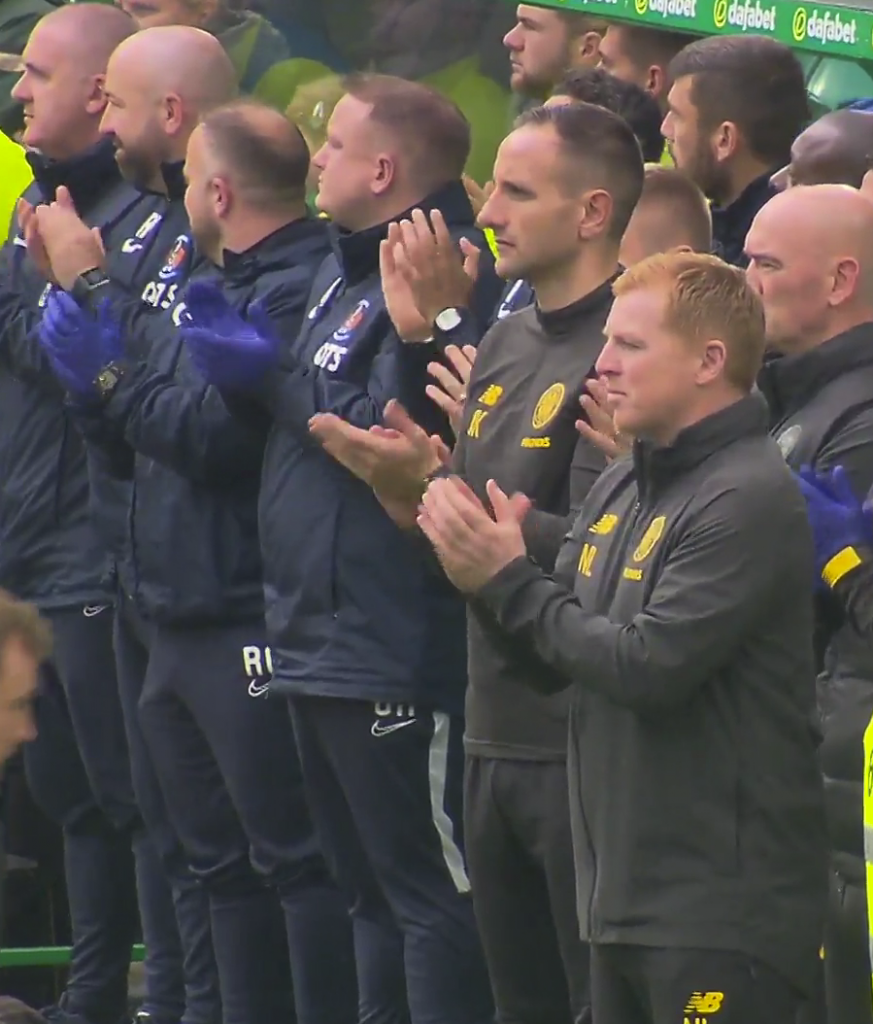 APPLAUSE…Neil Lennon and John Kennedy lead the tribute to tragic Fernando Ricksen before the kick-off.

The on-loan Stoke City right-back went off with an ankle injury while the £7million Frenchman appeared to have a hamstring problem.

Lennon explained: “Bauer is a trauma. He got a bang and twisted his ankle and Hatem Abd Elhamed coming on was fine. Christopher was feeling his hamstring. We don’t know yet, it’s too early to say, but we think it will be fine.

“However, it’s a great performance against a very good team who don’t concede much. I thought their goalkeeper made some world-class saves. The one for Olivier Ntcham just after half-time, I thought it was in, it was just a brilliant save.

“I’m getting everything I want from this team at the minute. Off the back of a really good performance in Rennes on Thursday night, they have cemented to league form with a brilliant display.”

The Hoops were given a jolt when Eamonn Brophy put Killie ahead in a rare breakaway in the first-half, but Odsonne Edouard headed in the equaliser just before the interval and the elegant Frenchman slipped No.2 beyond the goalie shortly after the turnaround.

Ryan Christie made certain with the third after he pounced on a rebound to net his 10th goal of the season.