Celtic Quick News on News Now
You are at:Home»Latest News»LENNY ON THE OLE GRAIL TRAIL
By CQN Magazine on 8th March 2019 Latest News

NEIL LENNON has had an Ole Gunnar Solskjaer-effect on Celtic since his return 10 days ago.

That’s the view of Aberdeen boss Derek McInnes who will do his utmost to make sure the interim Hoops boss does not enjoy a happy second homecoming at Parkhead tomorrow afternoon.

Lennon has already notched up to wins against Hearts and Hibs in Edinburgh after being pitchforked into the champions’ dug-out for a second time following the swift defection of Brendan Rodgers to mid-table Leicester City.

Pittodrie gaffer McInnes reckons the Irishman is following the example of Solskjaer who has come in at Manchester United in the wake of Jose Mourinho’s sacking in December.

The Norwegian, who was in charge of Molde when they beat Ronny Deila’s men home and away in the Europa League in 2015, has made an immediate impact at Old Trafford as he has led them to a remarkable unbeaten domestic run and into the quarter-finals of the Champions League following the historic midweek win over megabucks Paris Saint-Germain in the French capital. 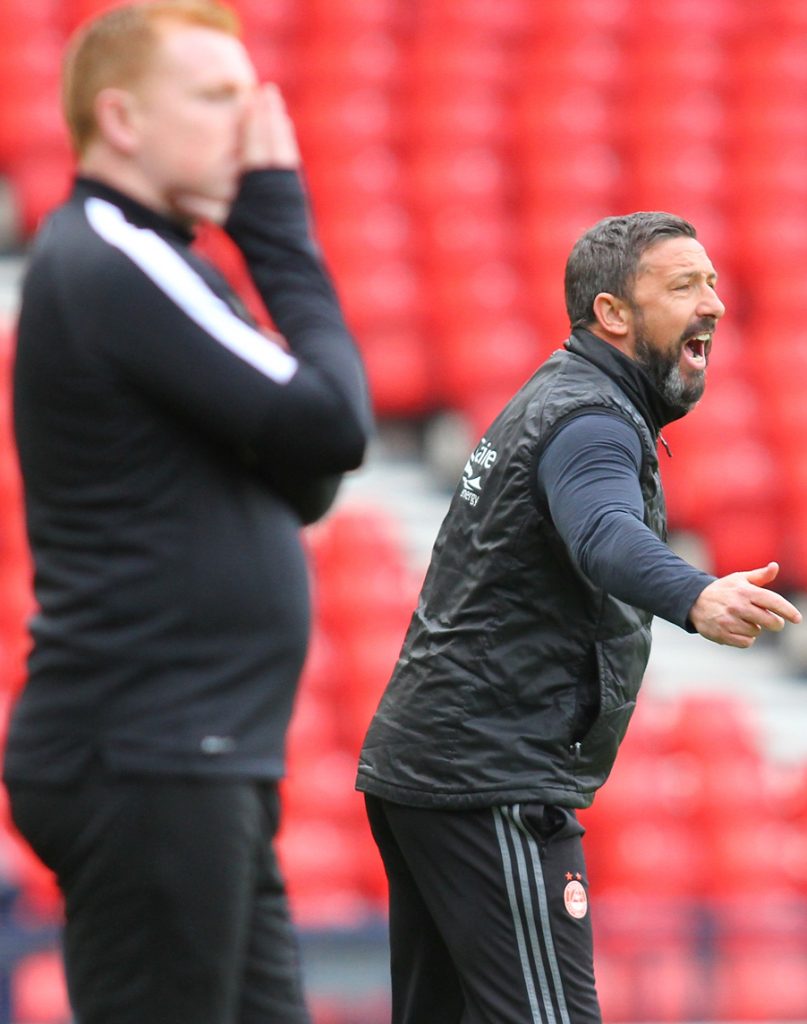 IT TAKES TWO…Neil Lennon, as manager of Hibs, and Aberdeen’s Derek McInnes during the 2017 Scottish Cup semi-final.

McInnes, speaking to the Daily Record, said: “I’m pretty much sure that Celtic have given him the job until the end of the season with the hope becoming permanent manager could be the outcome.

“We’ve seen it with Solskjaer. He’s so saturated within the Manchester United way of working, it’s seen to be easy for him to go in and get that club going the right way again.

“The only difference is that Celtic weren’t in a bad place.

“Neil knows Celtic the way Solskjaer knows United. He knows how things operate in there and how important it is dealing with that size of club.

“I’m pretty sure if Celtic finish the season the way they want to, Neil would be in pole position for the job. I’m pleased for Lenny because I was gutted for him when he lost his job.

“But it’s worked out well for him. He’s got a real opportunity and I’m sure he’ll be under no illusions of how much of a chance he has got to go and get the job permanently again.” 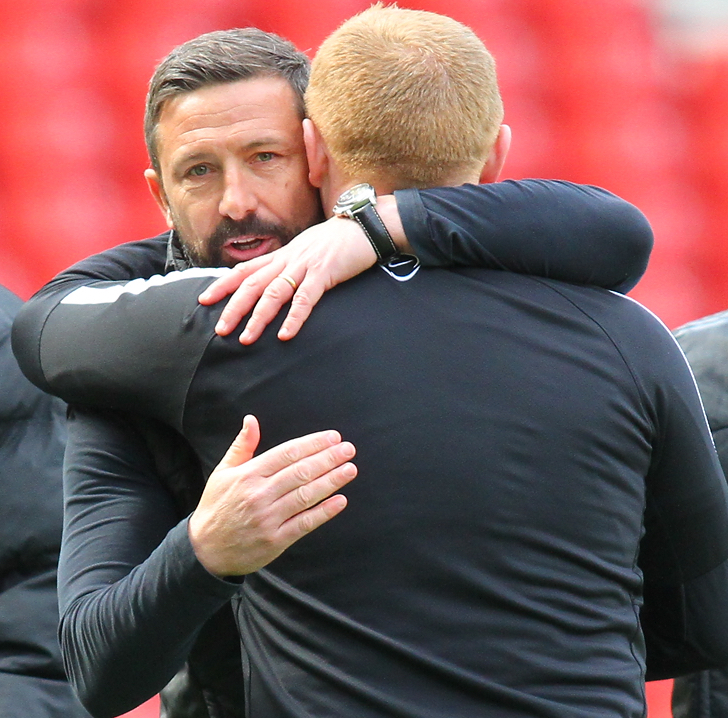 McInnes added: “I was surprised more at Brendan Rodgers’ departure.

“The more you thought it, the more Neil was linked with it, the more it made sense. I wasn’t totally surprised once I’d digested it all.

“Lenny has spoken about how it’s been a privilege for him and how fortunate he is to be back in the position as Celtic manager. But, equally, Celtic have the same fortune that Neil was available.

“A new manager might have come in with different ideas who didn’t know the club. That might have just complicated it a bit more than was required.

“They’ve got a guy who knows the club inside out and won things there and knows what it takes to deal with that.

“I’m sure that Lenny will be doing all he can to justify coming back.

“The disappointment maybe of the Celtic support with Brendan leaving hasn’t been as extreme because Lennon has come back in and got results.

“The positive of Lenny coming in has helped the disappointment of Brendan leaving.”