NEIL LENNON has hailed the “fantastic” job Brendan Rodgers has done at Celtic since taking over in May 2016.

The former Liverpool boss has won EVERY domestic trophy available in his two-and-a-half years as Hoops gaffer and collected his seventh piece of silverware at the start of the month with the club’s 1-0 Betfred League Cup Final success over Aberdeen at Hampden.

He will take the seven-in-a-row champions to Easter Road on Sunday to take on Lennon’s Edinburgh outfit in the relentless pursuit of Premiership points.

The ex-Parkhead manager has admitted his side must be at their “very best” to get a good result against the Scottish title kings.

Lennon, whose side recorded their first league win in six games on Saturday with a 1-0 victory at Hamilton, insisted his players need to play at their absolute best and hope their opponents, who hammered Kilmarnock 5-1 at the weekend, slip below those sort of standards.

Asked whether his team can compete with his old side, the Irishman answered: “Yes, but when they’re in the mood and with the mentality they’ve shown under Brendan, they’re fantastic. 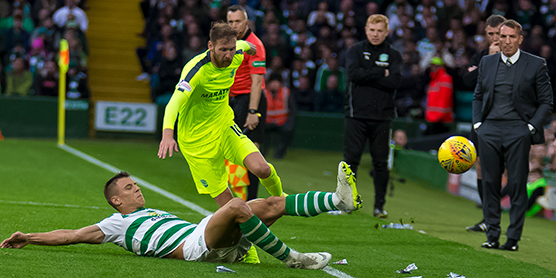 EYE SPY…Neil Lennon and Brendan Rodgers watch from the touchline as Filip Benkovic slides in to tackle Hibs attacker Martin Boyle in the Hoops’ 4-2 win at Parkhead in October.

“They play the big games really well and seven trophies in a row speaks for itself.

“Celtic can do what they did to Kilmarnock, who were top of the league, to any team on their day, so we’re hoping they have their frailties on the day and we have to play at our very best to get something out of it.”

The Edinburgh outfit were walloped 4-2 in Glasgow on October 20 when the Hoops turned in one of their most outstanding performances of the campaign with £10million man Odsonne Edouard claiming a double and Olivier Ntcham and Tom Rogic chipping in with the others.

However, Rodgers saw his side drop five points at Easter Road last season in a 2-2 draw and a 2-1 loss.

Lennon has his fingers crossed the visitors misfire again in the capital.