ONE down and three to go.

A double salvo from Mohamed Elyounoussi helped Celtic clear the first European hurdle in the 6-0 triumph over KR Reykkjavik at Parkhead last night.

Neil Lennon will discover next week’s opponents when Hungary’s Ferencvaros and Sweden’s Djurgardens meet this evening.

Hopefully, they will win their way through to the third round and then take care of the two-legged play-off to reach the cash-rich Champions League group stages after failing in the past two years.

Lennon praised his players as they overwhelmed the Icelandic title-winners with three goals in each half after getting off to the perfect start with a neat strike from Man-of-the-Match Elyounoussi.

Witnessing their first action in nine days after league games against St Mirren and Aberdeen were postponed on Scottish Government orders following the Boli Bolingoli incident, the Hoops boss was satisfied with a professional performance.

Norwegian international Elyounoussi topped and tailed the display after bringing down the curtain with a stoppage-time sixth goals with Christopher Jullien, Greg Taylor, with his first for the club, and Odsonne Edouard also got on the scoresheet while there was an own goal from a frantic defender. 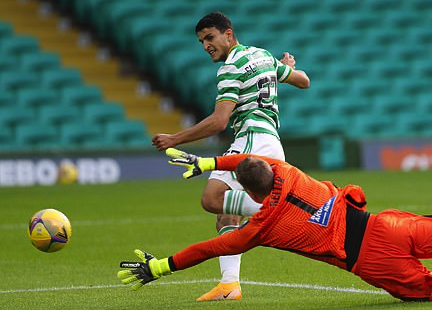 Insisting he had no preference, Lennon, speaking to Mail online, said: “They are two well-organised teams. I’ve been impressed with Ferencvaros from what I’ve seen from them so far. It will be interesting to watch the game. I think it will be tight.

“It was a good night’s work. It was really important to get 90 minutes work into the legs and obviously to negotiate the tie, as well.

“To score six goals and keep a clean sheet is very good. I’m pleased with a lot of what I saw.

“Any lethargy or lack of match practice, they need to get through it. I’ve been there myself.

“So, it’s important to try and increase the intensity and get the games into their legs.

“We’ll see how they are on Thursday but they should get a benefit from that.

“We’ve got a big couple of weeks coming up now, so it’s important we keep our focus.”

Lennon turned the focus on Elyounoussi and added: “I’m expecting more from him this season. He was very good last season until it was curtailed by the broken toe.

“You see what he brings to the team. He’s really powerful. He doesn’t look dynamic or quick, but he just wears people down.

“He’s really smart and the two goals will do him the world of good. He is another one who needs games to get going.

“We saw a lot more positives from him on this occasion.”

THE JOY OF SIX