The Celtic boss saw his side go two goals ahead through early strikes by Tom Rogic and Odsonne Edouard before some lamentable defending allowed the Serie A cracks back into the contest.

The Hoops have now conceded a landslide SEVENTEEN goals in five ties in the section and have collected only one point from a possible 15. Amazingly, they went into the group as top seeds and were the first to be eliminated when they crashed 4-3 to Sparta Prague last week.

Scott Bain was axed to make way for Vasilis Barkas who didn’t look too impressive in the 2-0 Betfred League Cup loss to Ross County on Sunday and failed to inspire confidence with another in[t display against Milan.

However, the under-pressure champions’ gaffer insisted his team played at a “very high standard”, but let themselves down by “not being physical enough”.

Lennon, speaking to BBC Sport, said: “I was delighted with a lot of aspects of our play. 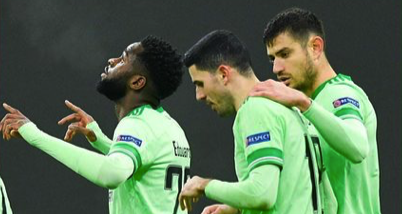 “Even at 3-2, I thought we were always in the game and we looked a threat all night. But we’ve let ourselves down in not being physical enough in the tackle at times.

“It’s not as if we were cut open, we have plenty of players back to deal with it and we don’t, so that’s the way the game went. That’s where the tie was lost, really.

“The scoreline doesn’t do us justice. We’re talking about playing AC Milan at the San Siro, we’re sitting here disappointed that we haven’t got something out of the game.

“Other people may say it’s another defeat, another four goals, I get that, I understand that.

“But the quality of opposition is top class and the performance of the team and the players as individuals was a very, very high standard.”

Lennon now has the task of reorganising and galvanising his troops once again for the crucial Premiership encounter against St Johnstone in Glasgow on Sunday where three points are an absolute MUST if they are to remain in the race for their tenth successive title.