DETERMINED Neil Lennon revealed he was PLEASED when Celtic were drawn against Cluj in the Europa League group stages.

The Romanians cut short the Hoops’ interest in the Champions League with a sensational 4-3 triumph in Glasgow in August. The tie had tilted in favour of the Scots following the 1-1 draw away from home the previous week, but the opportunity to gatecrash the big-time was obliterated in a maze of mistake seven days later.

That remains Lennon’s side’s only defeat in 18 games in this campaign and, obviously, it is by far the most expensive, a loss that wiped out upwards of the potential £30million expected from the lucrative group stages among the game’s elite.

Now the focus is on the Europa League and the immediate target is to achieve three points from Dan Petrescu’s upstarts at Parkhead this evening after earning a point in the opening Group E encounter in the 1-1 draw with Rennes in France a fortnight ago. 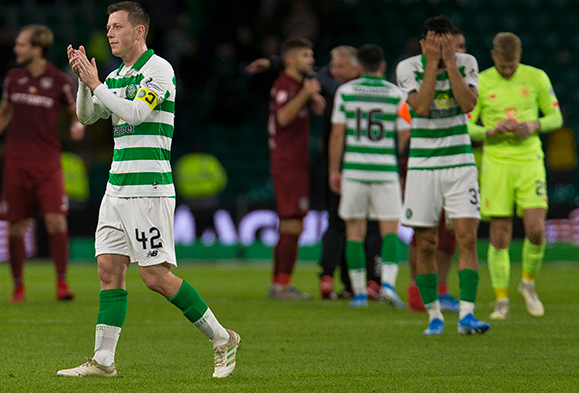 EMOTIONAL EXIT…Callum McGregor and his Celtic team-mates after the Champions League flop.

Lennon, speaking to the Daily Record, admitted: “I was pleased to get Cluj again because it was a quick opportunity to right a wrong.

“I don’t really look at it negatively or positively. You just have to put a perspective on it and look at what you’ve got in front of you. Gradually, we’re improving and it has been steady and really good progress since then.

“So, I’ve been delighted with the reaction.

“I don’t want to build it up as a revenge game. The important thing is that we play well and maximise the home advantage.

“We got off to a really good start with the point in Rennes and, if you want to qualify, you have to win your home games.

“Cluj are a good side and that has been underestimated. They ran Slavia Prague close in the qualifier and they’ve beaten Lazio.”