NEIL LENNON believes Celtic are “doing all right” since he replaced Brendan Rodgers five games ago.

But the interim manager has hinted changes are in the wind if, of course, he is given the role on a permanent basis at the end of the season.

The second-time-around gaffer had led the champions to wins over Hearts, Dundee and Rangers and a draw with Aberdeen to amass 10 points to help drive the team towards their eighth successive title.

Goals from James Forrest and Scott Brown downed Lennon’s former club Hibs in the Scottish Cup quarter-final at Easter Road to set up a last-four showdown with Aberdeen at Hampden a week on Sunday.

When Rodgers walked for mid-table Leicester City, an SOS was answered 24 hours before the match at Tynecastle and the momentum has kept the club on tracks for an unprecedented treble treble.

Lennon accepted he had inherited his predecessor’s players and tactics, but there are aspects upon which he wants to put his own stamp.

However, as he looks to land the post, the former skipper wants to be judged on his own merits.

“However, it works and you can’t change it overnight, anyway.

“You can implement little things, but there were aspects of the game on Sunday in the second-half that I wasn’t happy with in terms of managing the game. We should have done that a lot better.

“It’s difficult. I’ve just been softly softly. During the game, I was thinking: ‘If this ends up 1-1, I am going to be changing a lot of things. Or doing a lot more things my way’.

“I think from the outside looking in, people look at it and think: ‘That’s an easy job, you are just picking up the reins from where Brendan left off’.

“But there are adjustments that you have to make to the staff, the training structure, the players and the mentality of the players.

“I didn’t make this situation. I have come in and answered the call and we are doing all right.”

Reflecting on the 2-1 win over Steven Gerrard’s Ibrox outfit with James Forrest hitting the winning goal in 86th minute, Lennon said: “It shouldn’t have been as fraught as we made it because at half-time we were a goal up and had a man extra. There was a little bit of naivety from us at times in the game.

THE WINNER…James Forrest drills the ball beyond Allan McGregor for the second goal.

“I thought we were a little bit passive in the second-half in terms of our pressing.

“We sat off Rangers and Kent and Candeias kept coming off and getting turned. We really should have been 10 yards further up the pitch to stop the attacks around about the halfway line.

“Allan McGregor makes a good save from Scott Sinclair. If it had gone 2-0, then we would have been in control of the game.

“Then they equalise and there is an anxiety around the ground and the psychology of the game changes. Rangers are on the front foot even though they are down to 10 men.

“We did it at Hearts, as well. We went a goal up, they went down to 10 men and we conceded a goal early in the second-half that made it difficult for us. We did the same again.

“To be fair to Rangers, they played well. You have to give them credit. 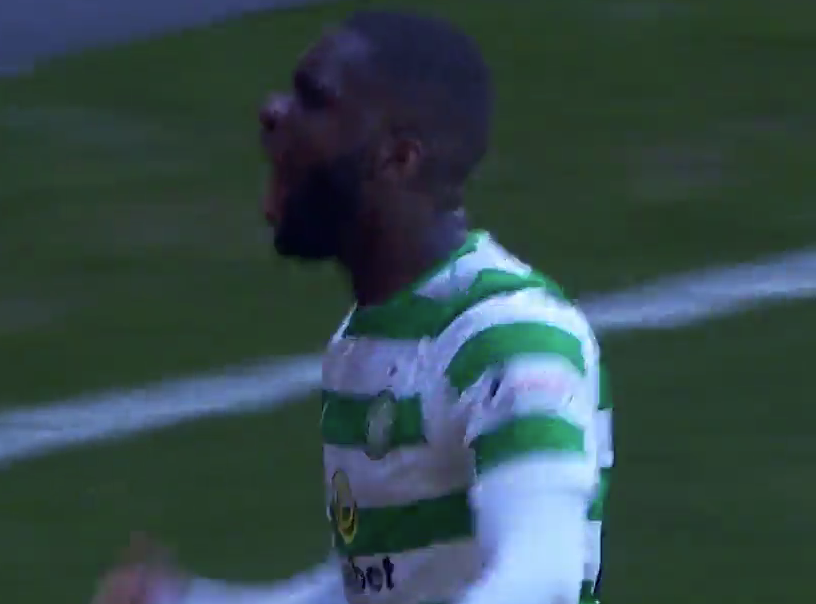 “On our first hour showing, we were well ahead. To be fair, it might have the last throw of the dice for Rangers on Sunday and they threw everything at it, but we overcame that.

“It was a cracking game of football. I thought for an hour we were superb, but you always need that second goal to put the psychology of the game well in your favour. At 1-0, anything can happen. And it did.”

Looking ahead to the run-in to the campaign which continues with a Premiership trip to Paisley to take on St Mirren Lennon added: “Maybe we can implement a bit more of what I want to do and how I want to play going into the final games, but there’s nothing really broken, so not much to fix.

“I am not going to reinvent the wheel. It’s simplicity. Just the little nuts and bolts of the game that we can do better.

“I would hope people would think the club is in a safe pair of hands. We have won four out of five. We have got over a big psychological hurdle on Sunday and we are now 13 points ahead in the league.

“Since I have come in, we have extended our lead by five points and we are in the semi-final. We haven’t done a lot wrong.”