Celtic Quick News on News Now
You are at:Home»Latest News»LENNY REVEALS ‘THEORY BEHIND THE MADNESS’
By CQN Magazine on 20th October 2019 Latest News

NEIL LENNON accepts many Celtic fans do not see European football after Christmas as a priority this season.

The Hoops boss is aware there are thousands locked into the ambition to clinch nine titles in a row on the way to the magical 10 successive championships.

However, Lennon insists he has a squad equipped to attempt to win all three domestic trophies for a phenomenal quadruple treble AND make an impact in Europe.

And he reveals the “theory behind the madness” as he attempts to plot the team’s way through a tough section.

Asked if supporters view the Europa League as important as lifting the Premiership crown, the Irishman, who is preparing for Thursday’s visit of Lazio, told the Evening Times: “I think most fans would say no. I think they would see the league as a priority – and I get that. 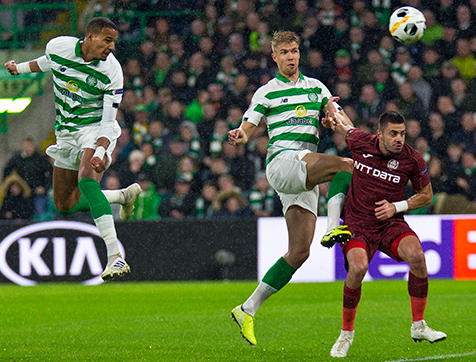 AIRBORNE…Christopher Jullien sends in a header against Cluj with Kristoffer Ajer supporting.

“While you’re in it, though, you’ve got to compete and do the club’s reputation well. I think it’s good for the players’ development, too.

“If I said to some players that I was going to leave them out against Lazio because we’ve got Aberdeen on the Sunday, I’d have a few expletives coming at me.

“We played so well against Cluj and when players are playing so well it’s hard to leave them out, they are in a match rhythm and confident.

“Things didn’t go for us at Livingston, the red card was a big turning point, and it’s a difficult venue to go and win a game anyway.”

Lennon continued: “We’ve played a lot in Europe, but I think Lazio at home, there will be plenty of players knocking on the door wanting to be picked.

“Sometimes you go horses for courses. For these games, though, I think you put out what you perceive to be your strongest team.”

The champions’ gaffer has named an unchanged starting line-up for the previous two group games – the 1-1 draw against Rennes in France and the 2-0 win over Cluj at Parkhead. 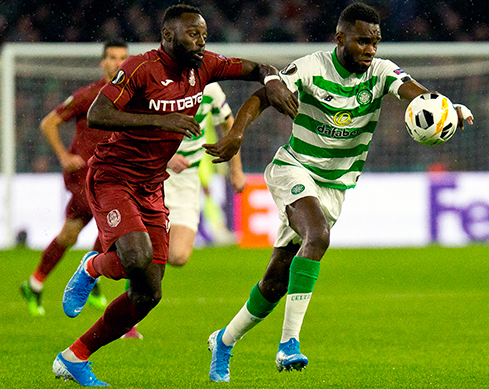 ON THE RUN…Odsonne Edouard piles the pressure on the Romanian rearguard.

He added: “It’s worked so far. We’ll obviously look at Lazio and if we need to change it accordingly, we will, but I’ve been delighted with the two performances so far.

”You’ve got a great chance of qualifying if you win your home games, so that’s the idea.

“It’s not a foregone conclusion, but that’s the theory behind the madness, if you want to call it that.

“We need to try and maximise home advantage in the group and we’ve got off to a good start with regards to the Cluj game.

“It was a good result and a good performance and I am hoping for more of the same against a quality side.

“We know what the atmosphere is going to be like and we can feed off that.”