However, the Hoops boss revealed the Frenchman had to change his footwear to get the grips with the dodgy, rain-soaked surface, a point flagged up by CQN in our match report.

Edouard emerged after the turnaround looking a lot more like his confident self and claimed the second goal as the visitors took a step closer to the next stage with the return leg of the Champions League first qualifier due at Parkhead a week tonight.

The club’s record £10million buy rediscovered his balance and poise after Mikey Johnston had scorched in a wonder goal to wipe out the Bosnians’ advantage and substitute Scott Sinclair back-heeled a cute third goal near the end. 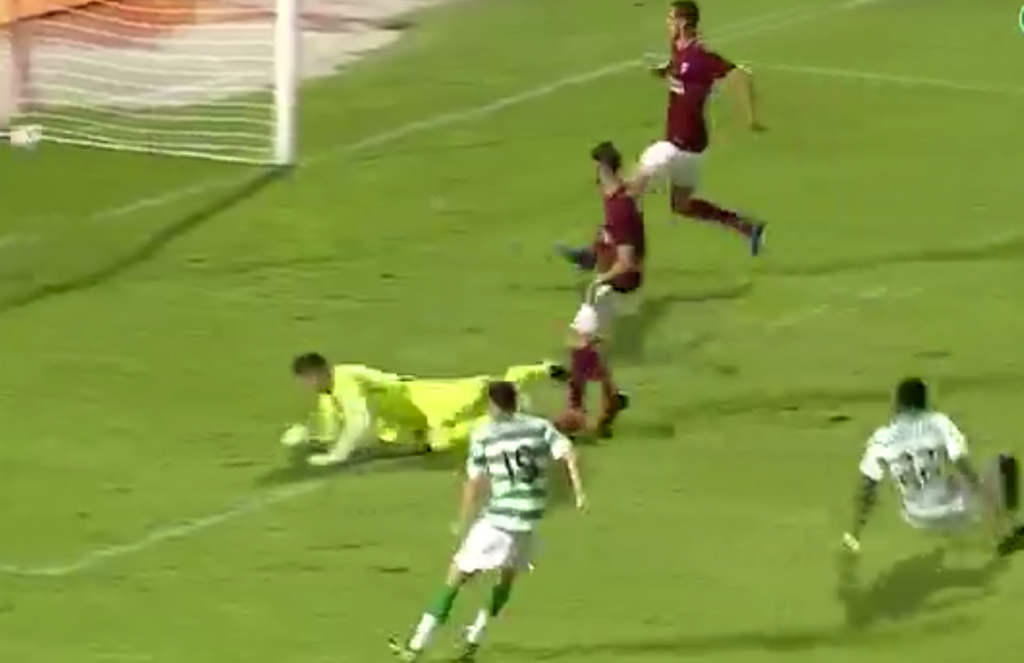 GOING DOWN – AND GOING IN…Odsonne Edouard prepares to hit the turf as his effort soars into the net for the second goal.

Lennon, speaking to the Daily Mail, said: “Odsonne is a big-game player. You don’t have to whip him much to get a response from him.

“But he had to change his boots at half-time because the pitch was very heavy.

“He was slipping a little bit, but he looked a lot more assured in the second-half. His finish showed great composure.

“Mikey Johnston also scored a great goal. It was a great hit and he did some special things in the game, so he can be delighted with his performance.

“Mikey’s goal was really important at that stage of the game because it settled us down and we had control after that.

“I am delighted by the result and performance. To score three goals away from home – no matter the level – at this stage of the season is very promising. And we could have won by more.’

Boli Bolingoli-Mbombo, the club’s new £3million left-back from Rapid Vienna, had to be replaced by Jonny Hayes just before the hour mark, but the Hoops gaffer played down fears of an injury. 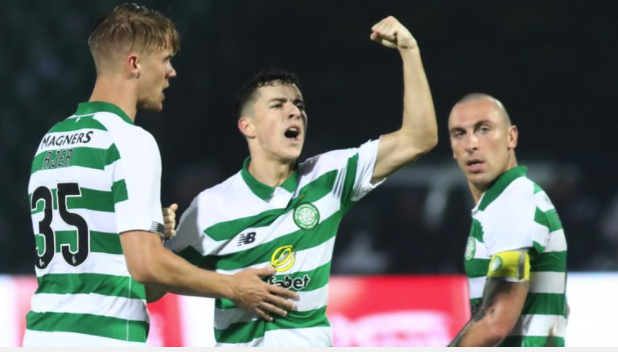 JOY BHOYS…Mikey Johnston shows his delight at his equalising goal with Kristoffer Ajer and Scott Brown in attendance.

He said: “Boli rolled his ankle, so I took him off as a precaution. Mikey Johnston came off because he was tired more than anything.

“But the subs who came on all made a telling contribution in the last half-hour of the game.

“It was just a great all-round squad performance.

“I was particularly pleased about how we reacted to the Sarajevo goal. We had been a bit cagey, trying to work them out, but once we got the ball down and moved it quicker, we got a lot of joy from that.”

Lennon, however, finished with a warning when he added: “But we still have a job to do in the second leg.”

Should Celtic progress, they will meet the winners of the tie between FK Shkendija, of Macedonia, and Estonians Nomme Kalju, with visitors Shkendija winning the first leg 1-0 in Tallinn last night.