Celtic Quick News on News Now
You are at:Home»Latest News»LENNY STILL TO SIGN DEAL: ‘I DON’T THINK IT WILL TAKE MUCH TO GET IT DONE’
By CQN Magazine on 26th May 2019 Latest News

NEIL LENNON has yet to sign a contract to officially confirm he is Celtic’s new manager.

However, the Irishman, who was offered the post in the immediate aftermath of the historic 2-1 Scottish Cup Final at Hampden yesterday, insisted it was largely a formality.

Lennon, speaking to the Scotland on Sunday, said: “There are obviously talks to go through, but I don’t think it will take much to get it done.

“I’ve had highs and lows, which is good, more experienced, a bit more nous about the game and maybe not as aggressive as I once was, but I’m still very competitive and still want to win.

“I’ve had to learn on the job here about myself, it was a different piece of management this time because it didn’t feel like it was mine and I had to coax it and cajole and get it over the line as best as I could.”

Lennon, of course, answered the call when Brendan Rodgers departed abruptly for Leicester City in February.

The 47-year-old comeback gaffer took over in a caretaker capacity to lead the Hoops to their eighth successive title as well as the unprecedented treble treble in a rollercoaster season that has been littered with unexpected twists and turns.

Lennon revealed a “five-minute conversation” in the dressing-room with chief executive Peter Lawwell, largest shareholder Dermot Desmond and director Tom Allison while he was “dripping in champagne” provided him with a potentially “life-changing moment”.

After playing what he said was “just a small part” in an “historic” achievement that came with a “weight of expectation”, he can now look forward to building on his near-five years in charge across two trophy-laden spells.

Discussing winning the league and Cup double in three dramatic months, Lennon smiled: “If anyone had said that I’d have said Hibs are in for a right good time this year! 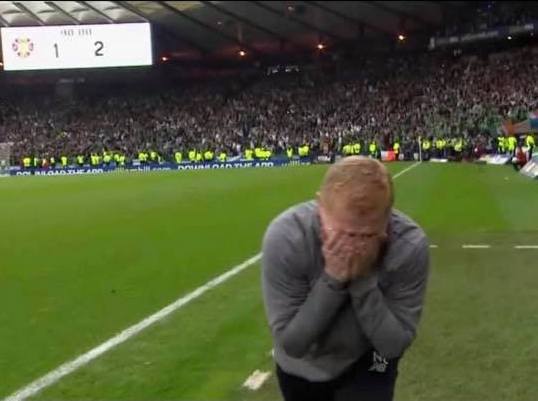 TEARS OF JOY…an emotional Neil Lennon at the final whistle.

Lawwell maintained the job offer would have been made irrespective of yesterday’s outcome and Lennon had no problem about only discovering about being given “privilege” to manage Celtic again, as he did from 2010 to 2014, until after the Cup Final.

He added: “It keeps you on your toes. It was challenging, but I have complete trust in these guys. I had four great years working under the board, four great years, great times and when the time came we sat down and shook hands and left on very cordial terms.

“I have always kept in touch with Peter and he has kept an eye on my career and been a great support to me.

“It is a privilege. It was a privilege the first time. That was nine years ago, I was younger and a bit more robust. Now I have come full circle. I left the club on good terms and I always wanted to come back and manage again.

“It has been hard work, I had a difficult time at Bolton for reasons not within football and then I had a great couple of years at Hibs. I owe them a debt of gratitude for giving me the platform to get back into this position again.

“I never second guessed anything. These guys are class people. I trust them and trust their word and I expected nothing else.

“Obviously, we have had to deal with a lot of speculation and a lot of false news, but they kept me abreast of everything and they were upfront and honest.

“If anyone has ever dealt with Dermot Desmond they will know you get what you see.”