Celtic Quick News on News Now
You are at:Home»Latest News»LENNY UNLEASHES FURY: ‘THERE ARE TIMES WHEN THEY NEED TO BE TOLD’
By CQN Magazine on 23rd April 2019 Latest News

NEIL LENNON has revealed the Celtic players felt the full force of his rage in the aftermath of the disappointing scoreless stalemate against Hibs at Easter Road at the weekend.

The Hoops failed to get the win that would have set up a potential title party at Parkhead on Saturday where a victory over Kilmarnock would have made certain of an eighth successive crown, as CQN reported yesterday.

However, the side toiled to a third 0-0 draw in seven Premiership encounters – following identical results against Aberdeen and Livingston – to leave the Irishman seething in frustration.

A triumph over Steve Clarke’s outfit will not be enough to kick off the celebrations on the day although the title kings could be certain of the flag 24 hours later if Steven Gerrard’s Ibrox side lose at home against Derek McInnes’ Pittodrie outfit who have already beaten them three times in Glasgow in this campaign. 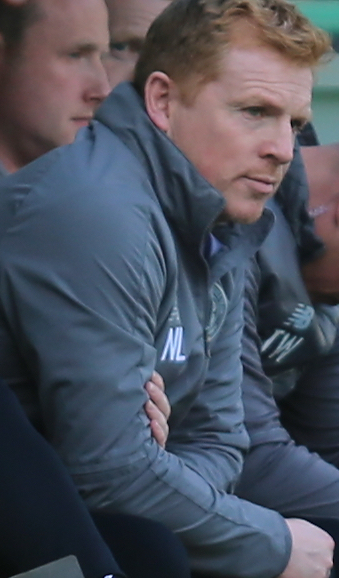 CALM BEFORE THE STORM…Neil Lennon in the dug-out at kick-off.

A win against a Killie side hit by suspensions after suffering three red cards in their 1-0 loss to the Dons will see the title kings on 81 points while their nearest challengers could only reach 78 assuming they took maximum points from three remaining outings.

Lennon’s men are struggling towards the finishing line and have netted only seven goals in seven games with their four victories coming against Hearts 2-1, Dundee 1-0, Rangers 2-1 and St Mirren 2-0. Top scorer is Odsonne Edouard with three while James Forrest has chipped in with two. Timothy Weah and Ryan Christie have added the others.

The interim manager was asked if the players had seen a different side of him following the match in Edinburgh, the Irishman, speaking to the Daily Record, responded: “Maybe. I’m following in great footsteps and maybe it’s not Brendan’s way, the way I approach games.

“Listen, I have this reputation as being a hairdryer-type manager. I’m not at all. But there are times when they need to be told and Sunday was one of those days.

A WORD OF ADVICE…coach Damien Duff gives some instructions to Jonny Hayes while John Kennedy looks on.

”I don’t know if it’s the environment or the circumstances. This is their title and they have to make the most of it. They can’t just put in inconsistent performances.

“After a spectacular win against Aberdeen, it should have been the start of them playing like that consistently. But for the first 20 minutes I thought I was looking at a different team.

”Regardless of whether I’m here or not they should be focusing. We just need to win it and stop thinking about when we’re going to win it.”