CONOR HAZARD will be in goal and Ivorian midfielder Ismaila Soro will make his first Celtic start against Lyon this evening.

Neil Lennon is poised to go with the team that finished the 1-1 draw with Nice on Thursday evening when he changed his entire starting line-up just after the hour mark.

The Hoops boss is searching for at least one new keeper to strengthen his last line of defence and will run the rule over 22-year-old Northern Ireland netminder Hazard against the French outfit.

Anchorman Soro and Olivier Ntcham replaced skipper Scott Brown and Callum McGregor in the middle of the park in the first outing and Lennon has already expressed his delight at the £2million man’s progress since the team returned alling four months of lockdown.

The Parkhead gaffer is preparing for another encounter behind closed doors and, speaking to the Daily Record, said: “The other night was very different to what we are used to because Celtic have a huge support — home or away.

“It is the new norm, but, hopefully, only for the short term. Psychologically, it’s something that the players will have to get used to. But I didn’t see any ill effects or negativity surrounding it the other night against Nice. 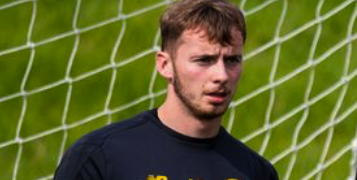 IRISH AYES…Conor Hazard is ready to start against Lyon.

“The players were very happy and enthusiastic to play. But it’s something I will be monitoring because I’ve watched a lot of games behind closed doors. The first league back was Germany and there were some strange results there.

“Even in the English Premier League some of the games seem a bit surreal because we are so used to passionate crowds — and Celtic is no different.

“But, hopefully, we can use this experience in France and it will benefit the players when we return.

“Both Lyon and PSG have huge games coming up soon and we will give them really good preparation.

“I watched PSG beat Le Havre 9-0 at the weekend, so that will be a very very difficult game for us.”

The nine-in-a-row champions travel to the French capital on Tuesday to face Paris Saint-Germain in their third and final match during their warm-up preparations across the channel.

The real action kicks off against Hamilton Accies in the Premiership opener at Parkhead on Sunday, August 2.