Celtic Quick News on News Now
You are at:Home»Latest News»LENNY’S HOMING IN
By CQN Magazine on 30th July 2019 Latest News

NEIL LENNON is delighted Celtic are away from home for the first leg of their Champions League third round qualifier against Cluj in Romania a week tomorrow.

The Hoops boss watched his side complete the job against Nomme Kalju in Tallin tonight as an own goal and a wonder strike from Maryan Shved handed them a 2-0 victory on the evening and a 7-0 triumph on aggregate, as CQN reported earlier.

While Lennon’s men were making no mistake in Estonia, former Chelsea defender Dan Petrescu’s Cluj outfit were drawing 2-2 against Maccabi Tel Aviv in Israel to battle through on a 3-2 overall score.

The Irishman, speaking to BBC Sport, paid tribute to next opposition who will attempt to derail the Celts on their way to the Champions League stages.

He acknowledged their threat and said: “They’re a difficult side.

“The good thing for me is that the first leg is away, so, hopefully, we can get some type of result to take back to Celtic Park.

“We’ve done a lot of work on them already, so we’ll be well prepared. We know it will be a step up, but we’re going in the right direction. There’s no question of that.”

Lennon could afford to leave Scotland international duo James Forrest and Callum McGregor at home and could take the opportunity to give centre-back Christopher Jullien – a £7million signing from Toulouse – his competitive start while £2million Ukrainian winger Shved was introduced to proceedings late in the game.

He almost scored within the first moments of his arrival when he was thwarted by a good save by Pavel Londak, but he still managed to mark the occasion with a blockbuster left-foot drive that sealed the win in stoppage time. 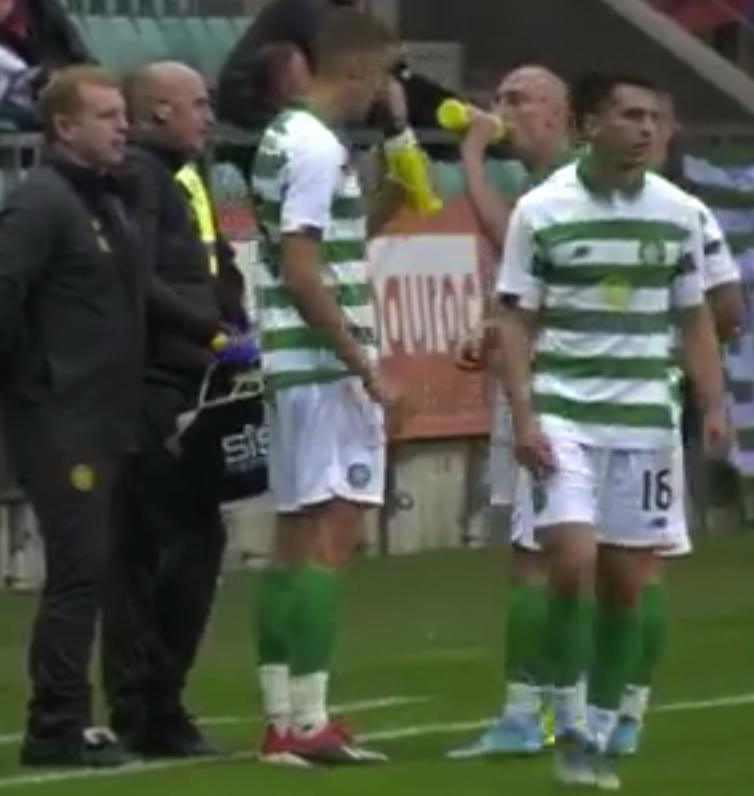 TIC TALK…Neil Lennon has a chat with his players during a break in pay in Tallinn.

The champions’ gaffer said: “I’m not getting carried away, but I’m pleased for the new boys coming in.

“Christopher had his first 90 minutes. I thought Olivier Ntcham was outstanding considering that was his first real run-out. And it was a great goal from Maryan. He showed what he’s capable of in a little cameo.

“I’ve also got James Forrest and Callum McGregor to factor in and Kristoffer Ajer and Odsonne Edoaurd to come back, as well. So, the depth is looking a lot better and we’re in a good place at the minute.”

Lennon, who has spent £12milion in new players this summer, admitted there are still “two or three” positions that he is keen to strengthen.

He also said that some players may yet leave before the window closes on September 2, but insisted winger Scott Sinclair is not one he is looking to move on.

The Englishman has been inked with Sheffield United and Preston this month and came on as a substitute this evening in Tallin and was denied a goal by a wonder save from the keeper.

The Hoops chief added: “It’s just a little difficult period for Scott. A player with that experience is always so handy to have around. He’s got a great goal record and he’s had a great time at Celtic.