AH, well, looks like we’ll just have to wait until next week to throw a title party.

Hibs, aggressive right from the off, confounded the odds at www.betting.org and stalled the celebrations with a triumph at Easter Road this afternoon where most of the big decisions went the way of Neil Lennon’s men.

The opening goal from Jamie MacLaren was a tight decision, but TV pictures showed it was marginally offside. The assistant referee kept his flag down when match official Steven MacLean looked quickly in his direction.

The score was given and it gave the Hoops an uphill climb from the 25th minute onwards.

It allowed the home side something to defend while looking to hit on the break against a Celtic back lot that looked far from comfortable.

Kristoffer Ajer tried manfully to hold things together as Dedryck Boyata struggled against the pace and competitiveness of Florian Kamberi, who clattered around in challenging fashion all day and it took until the final 10 minute before he was inevitably booked by a patient MacLean.

John McGinn was another serial offender and he, too, was yellow-carded late in the game, but you had to give a shred of pity to Kieran Tierney who was booked in the 11th minute for a simple challenge on Martin Boyle. It was probably the left-back’s first tackle and MacLean deemed it worthy of note. 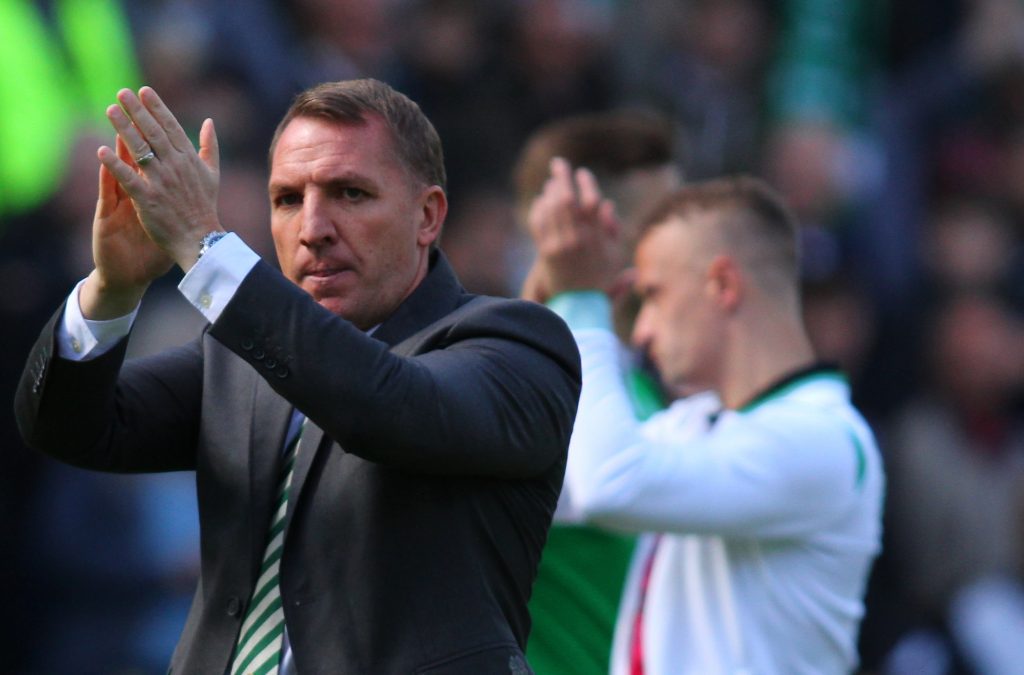 CAPITAL PUNISHMENT…Brendan Rodgers and Leigh Griffiths acknowledge the Celtic support after the loss.

Scott Brown went into the book, too, in the 70th minute for a foul on Brendan Barker who had come on as a substitute and terrorised Jack Hendry with his pace.

Vykintas Slivka also entered proceedings and got what proved to be a simple second and winning goal while Odsonne Edouard, on for Leigh Griffiths, gave the champions some hope, but they couldn’t force an equaliser.

Any misguided souls who thought Lennon might not be too bothered about the outcome will surely have had a change of mind if they had seen the former Celtic boss during this encounter.

He frantically waved his arms around, looking like a windmill caught in a hurricane, as he lurched around the touchline contesting throw-ins, free-kicks, the price of milk. You name it, Lenny protested about it.

Griffiths, leading the attack in place of the injured Moussa Dembele, tried his luck from distance inside the first minute, but his low drive swept harmlessly wide of the post.

Just a moment later, Dylan McGeouch snapped onto a loose ball from Tom Rogic to slide a pass in front of Kamberi, but Craig Gordon raced from his line to block the shot for a corner-kick.

With the game zipping from one end to another, Ajer then embarked on a lung-bursting 60-yard run out of defence before setting up Griffiths.

The comeback frontman touched a superb pass in front of Rogic, but the Aussie lacked his usual composure and hurriedly hit his effort against the foot of the outrushing Ofir Marciano and the ball rebounded to Griffiths. His drive was athletically punched to safety by the Israeli keeper as he raced back to cover his line. 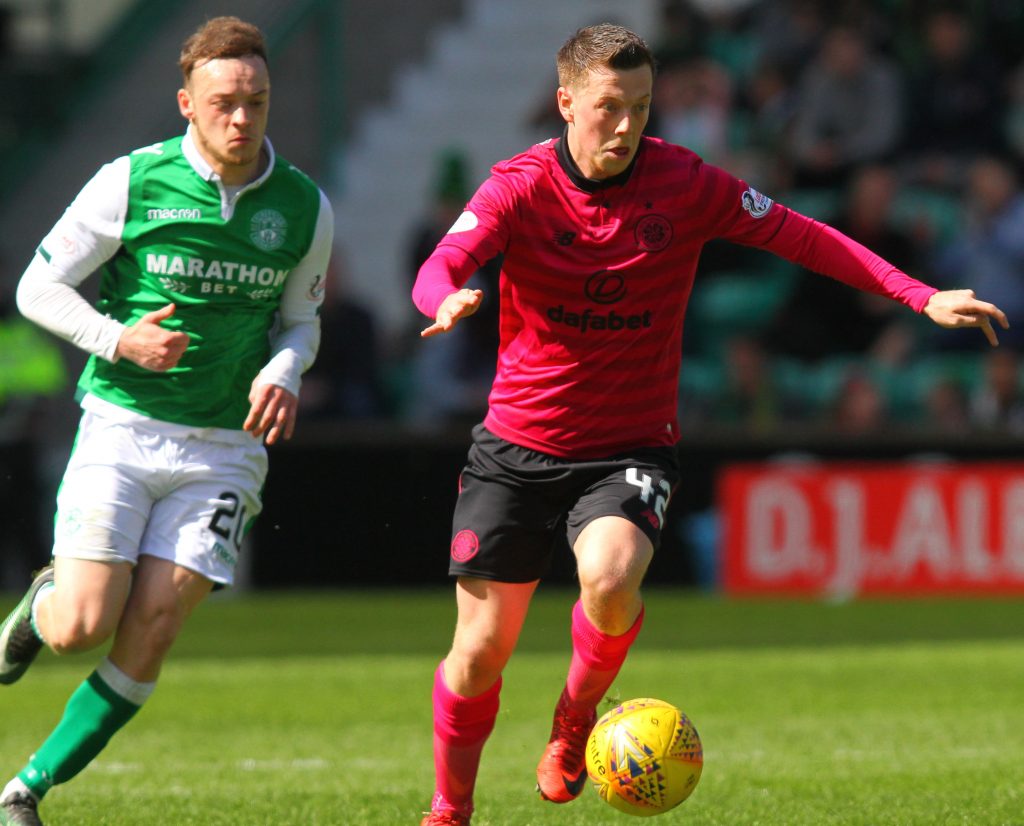 ON THE ATTACK…Callum McGregor races away from Brandan Barker.

In the eighth minute, McGinn was lucky to get away with a blatant elbow in the face of Rogic who collapsed to the turf. Remarkably, the referee waved play on. It was just one of a few bewildering decisions by the match official.

The opening goal in the 25th minute was the result of a dreadful pass out of defence by Gordon. He ball to Hendry lacked pace and was in the air far too long. It gave the Hibs players a chance to attack the clearance and Lewis Stevenson latched onto the forced header from Hendry.

He drove forward, accepted a touch from Kamberi and fired over a cross from the left wing. Boyata couldn’t have seen MacLaren on his blindside and the Aussie attacker got a foot to the ball to turn it in from close range.

Gordon hopefully claimed for offside, but the linesman didn’t quite agree and the goal was given. 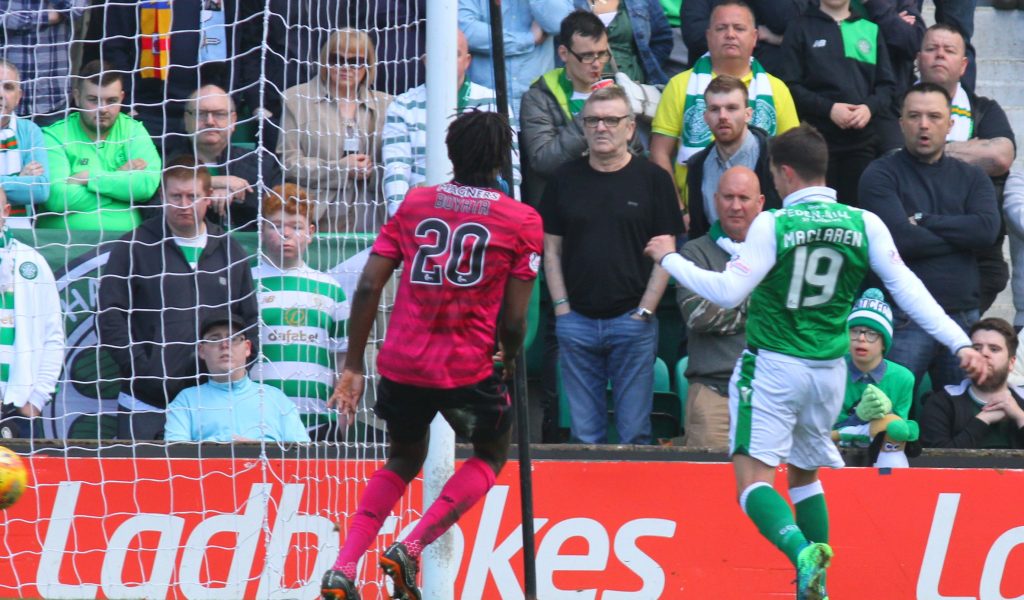 The Hoops No.1 atoned a few moments later when he was quick off his line to smother the ball after MacLaren had far too easily rolled Boyata in the box.

In the 26th minute, Efe Ambrose got away with one when he went over the top on Olivier Ntcham, but, once again, the match official wasn’t interested.

Gordon was then asked to make a smart save after a ricochet off Boyata could have proved costly and then he held an angled drive from Danny Swanson as the home side sought to double their advantage.

Little had been seen of Callum McGregor at this stage and James Forrest wasn’t getting the opportunity to run at Stevenson.

In the 37th minute, Griffiths and Rogic combined to set up Tierney, but the defender didn’t take the initiative and the opportunity was lost. 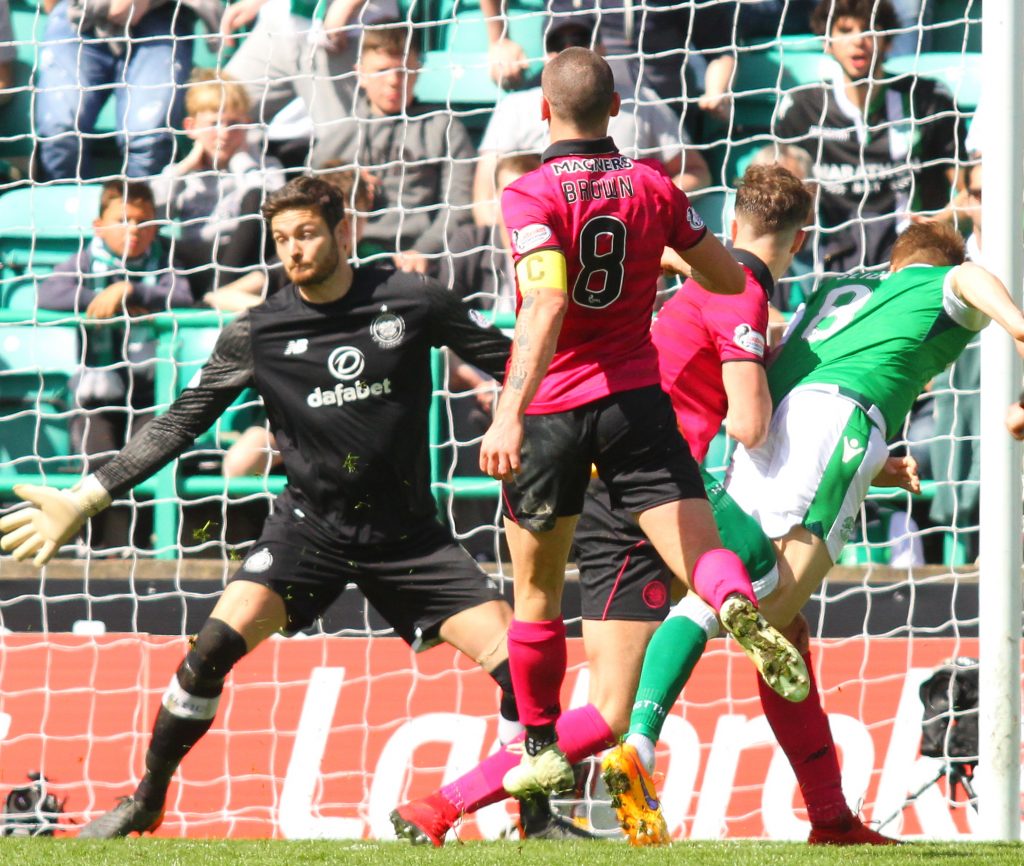 Four minutes from the interval, the left-back set up Ntcham with an excellent ball in, but the French midfielder’s effort was hopelessly off target from a good position. He slashed it high and wide.

It was no surprise when he did not come out for the second-half with Rodgers reshaping the line-up with Scott Sinclair coming on to give the team a bit of an attacking presence on the left.

In the 49th minute, Swanson won a 50/50 battle with Brown for the ball, but Gordon did well to hold his shot low to his left.

Seven minutes later, Rogic had a horrendous miss when he was left in a one-v-one situation with the keeper. Some clever play from Brown and Sinclair sent him clean through, but, as in a similar situation in the first period, he lacked a thoughtful finish and battered the ball off Marciano.

Celtic poured forward in search of the equaliser, but another chance was lost when Sinclair dallied on the ball on the edge of the box and a grateful Hibs rearguard repelled the raid.

In the 65th minute, Rodgers introduced Edouard for Griffiths with the hitman still waiting for his two strikes to complete his 100 goals for the Hoops. Today just wasn’t his day.

And five minutes later, Patrick Roberts replaced Forrest as the Parkhead men went for broke as they determinedly fought against losing their third domestic game of the campaign with Hibs desperate to join Hearts and Kilmarnock as the teams who have claimed the champions’ scalp.

Ten minutes from the end, Gordon conceded again when a ball up the right wing from Boyle somehow defied gravity and remained in play. Kamberi seized on it and picked out Slivka who moved in front of Hendry at the near post.

The ball was crisply delivered and the Hibs substitute nodded across the helpless keeper and in at the far corner.

Six minutes later, Ajer cleared off the line after some slack play from Rogic and a short passback to Gordon allowed the eager Boyle a sight of goal, but the Norwegian managed to boot the ball away from virtually under the crossbar. 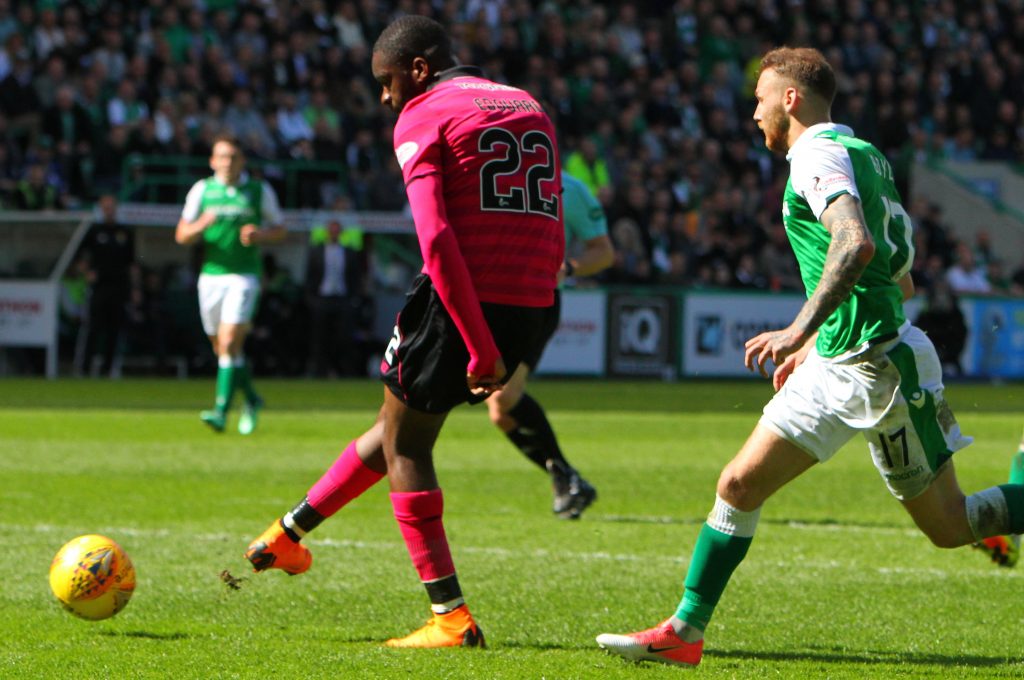 In the 87th minute, Edouard did manage to get what turned out to be a consolation goal.

Roberts and Sinclair combined sweetly to send the French striker through and, unlike Rogic on his two occasions, he remained calm, drew the keeper and slotted the ball neatly into the corner.

That was the signal for the Hoops to attempt to get the leveller, but it wasn’t to be.

However, there is always next week to look forward to when Celtic have the opportunity to produce their Sunday best and enjoy their seventh heaven in Paradise.