Celtic Quick News on News Now
You are at:Home»Latest News»LENNY’S REASONS TO BE CHEERFUL
By CQN Magazine on 31st July 2019 Latest News

TWO rounds down, two to go, four wins, TWELVE goals scored, two conceded – and the best is yet to come reckons Neil Lennon.

Celtic eased into the third qualifying round of the Champions League after a comfortable 2-0 win over Estonia’s Nomme Kalju in Tallinn last night for a 7-0 aggregate triumph.

Serbia’s FK Sarajevo were taken care of 5-2 overall and now Romania’s Cluj, 3-2 victors over two legs against Maccabi Tel Aviv, stand in the way of the final hurdle that leads to the riches and prestige of the group stages of Europe’s elite club competition.

An own goal and a late crashing 18-yard strike from debut Bhoy Marian Shved fired the Hoops into the showdown with Dan Petrescu’s title-winners with the first leg in Romania a week tonight and the return at Parkhead the following week.

A satisfied Lennon, speaking to the Evening Times, said: “I don’t think the players can give me any more.

“They have been absolutely excellent and I think there’s more to come from them.

“We’re still not where we really want to be in terms of match fitness and match sharpness, but we’re in a good place and we look at threat and that’s very pleasing.

“I am very happy with the performance and with the scoreline over the two legs. 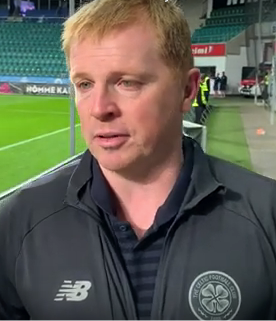 “I am happy to get important minutes into the legs of some of the players who haven’t had that luxury so far. We are injury free and the tie was always going to be a little bit different psychologically because of the lead that we had.

“I thought we had very good control of the game and scoring the early goal was very important.

“It set a good mentality and attitude towards the game and showed we were not just here to fulfil a fixture. We are very pleased with the attitude and comprehensive performance we showed.

“I thought we had a very tough tie against Sarajevo in the opening round and we negotiated that very well. We are two or three weeks fitter down the line and obviously we have negotiated this qualifying round brilliantly, so we are in a good place at the minute.

“But as you go along in the qualifying campaign the quality does get stronger.

“Cluj are a very experienced side with an experienced manager, but we’ll cross that bridge when it comes. We’ve had them watched in both ties, so we will be well prepared for next week.

“Winning this one keeps the momentum going into the domestic campaign on Saturday.”