NEIL LENNON rates skipper Scott Brown as one of Celtic’s “most influential players” over the past two decades.

And the Hoops boss admitted the 34-year-old midfielder would have regretted leaving the eight-in-a-row champions in the summer when he was linked with Australian outfit Western Melbourne.

Lennon heaped the praise on the man who cost Gordon Strachan a Scottish record transfer fee of £4.4million when he joined from Hibs in May 2007.

He also revealed it would be “a serious concern” for him if the team’s onfield leader was sidelined for any length of time.

The Irishman, speaking to the Sunday Mail, said: “Scott could have played in the Martin O’Neill team I was part of because he’s got the character. He’s one of the most influential players at Celtic over the last 20 years.

“He would be in the top three or four, comfortably.

“I didn’t have a shred of doubt about him when I came back here.

“In fact, I was so glad when I heard he’d signed the new deal in January. 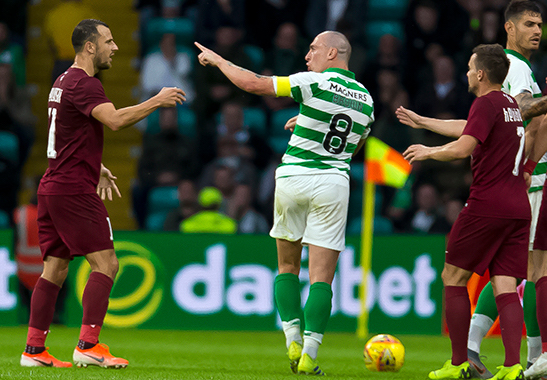 MAKING HIS POINT…Scott Brown in the middle of the action as usual during the midweek win over FK Sarajevo.

“I know what it’s like when you’re debating what you might do at that stage of your playing career.

“He might have been thinking about a new challenge. That can eat away at you subconsciously.

“At that stage he just wasn’t on it. But as soon as he signed, it was as if the light came on and he was back to his best again. I came in and he was outstanding in the run-in.

“He’d have probably regretted the move to Australia as soon as he got off the plane.

“Now, he’s here, he’s just won another treble and is still leading the Celtic team from the front.

“I don’t think you ever lose that edge he has. On and off the field, he’s such a good influence.

“If he was out of the team for a concerted period it would be a serious concern for me.”

Brown is now one of the most decorated players in the Hoops’ history with a remarkable NINETEEN trophies in his 12 years at the club.

The former Scotland international captain, who made 55 appearances for his country, has won nine league titles, five League Cups and five Scottish Cups. He also picked up  a League Cup during his time at Easter Road.