NEIL LENNON has challenged his Celtic players and told them they will have to earn their places in his side.

The Hoops boss is looking forward to tackling a hectic nine-game schedule this month, starting with today’s midday clash with Ross County at Dingwall, has revealed he has yet to decide on his strongest line-up.

Lennon told the Sunday Mail: “I don’t have a first team set in stone. We do have first-team regulars, but we don’t want anyone to think they’re just bit-part players because when the competition is good and the squad depth is good, you want them to be able to step in and have a seamless transition.

“That’s in a Utopian world, obviously, but they are making a good fist of it at the minute. How? They’re a good bunch. They set a good bar professionally. The fitness levels are excellent and the staff behind the scenes do a good job of keeping them fit and motivated.

“The hard work doesn’t become hard any more, it just becomes your work and they get used to that intensity day in, day out. 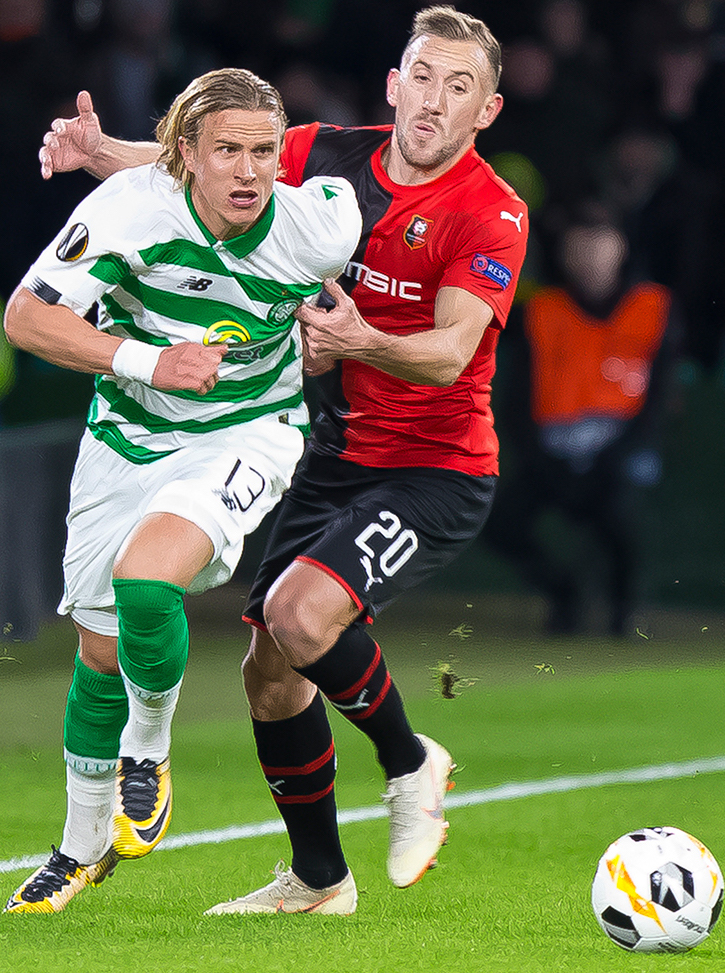 POWER PLAY…Moritz Bauer on the run against Rennes.

“Some of them are naturally fit – Lewis Morgan, Moritz Bauer, Jonny Hayes can be out of the team, but come in and hit the ground running.

“They top themselves up constantly on their levels of fitness. Once they get a taste of it, they enjoy it and want more.”

A week today, the holders, who have won the Betfred League Cup over the past three seasons, will take on Steven Gerrard’s Ibrox outfit at Hampden in the first silverware showdown of the season.

Before that meeting, there is the Hamilton Accies Premiership encounter to be taken care of as the team keeps its eye on nine in a row.

Lennon will utilise his squad in all three games as he aims for six crucial league points and the club’s TENTH successive domestic trophy.