CQN asked Alex Gordon, author of fourteen Celtic books with another in the pipeline, for his verdict on the team’s dramatic Europa League exit last night.

In an exclusive interview, Alex said: “Following such a colossal anti-climax, there is the inevitable knee-jerk reaction when scatter-gun criticism normally comes into play.

“Of course, it is easy to point the finger at candidates who had an evening to forget, experienced players making inexplicable mistakes for which no-one can legislate.

“Sometimes, though, Dame Fortune casts a scowl in your direction and your fate is sealed. There is no argument Celtic players contributed massively to the embarrassing exit, but digest these statistics for a moment, please.

“FC Copenhagen had five shots on target over the two legs.

“They scored with four of them and Fraser Forster touched the other onto the post with his superb penalty-kick save in the Danish capital last week. 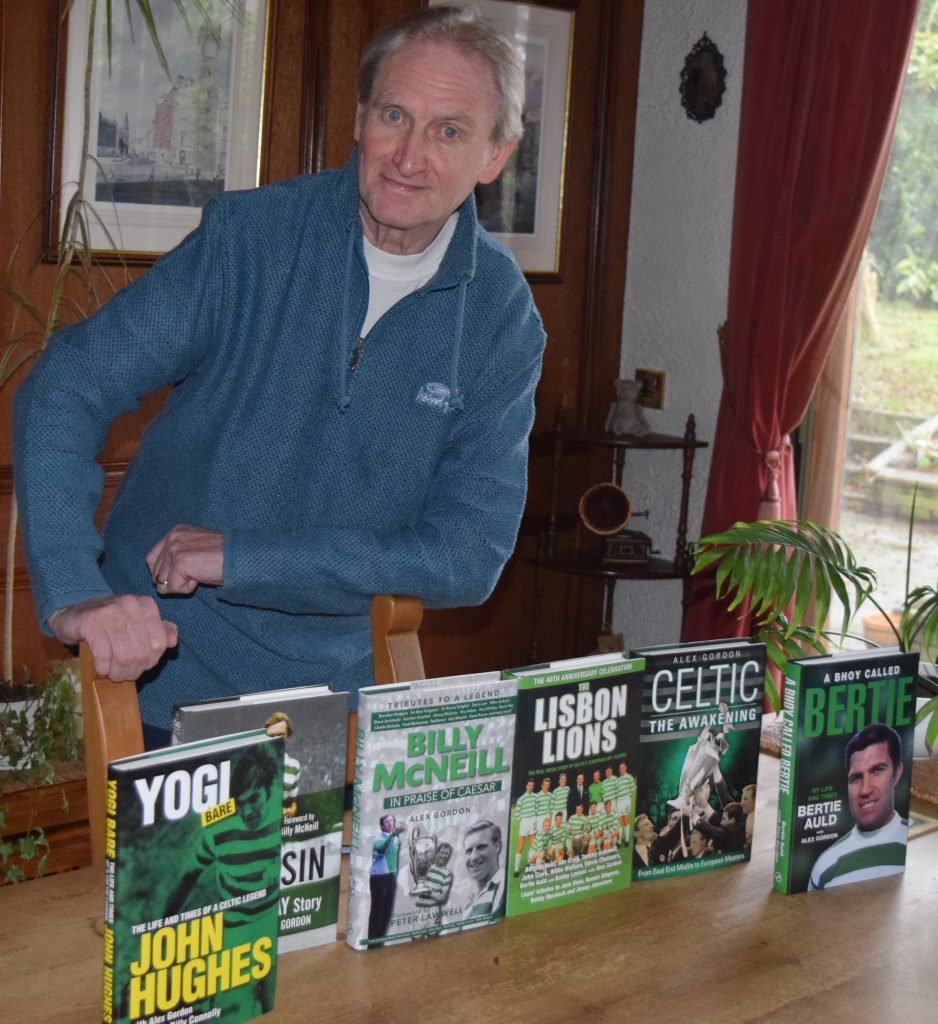 READ ALL ABOUT…author Alex Gordon with a selection of his Celtic books.

“Celtic had 56 per cent of the possession in the first leg and 62 per cent last night. Yes, I realise stats can be manipulated to suit any debate, but, really, those unarguable facts are quite mesmerising.

“The only one that matters, of course, is the one that informs you the Danes scored four goals to Celtic’s two and that’s why they are in the draw for the last-16 of the Europa League today.

“In these moments, rash comments can be made and cruel judgements can be passed. Neil Lennon will be hurting and so, too, will his players. And, of course, the supporters will be feeling sore today. I know – I am among them.

“I was on the Parkhead terracing the night Dynamo Kiev won 2-1 in Celtic’s first European Cup-tie after making history in Lisbon only four months beforehand. No-one – and I mean no-one – saw that one coming.

“I watched Billy McNeill miscontrol a Jim Craig throw-in which was snapped up by AC MIlan’s Pierino Prati who then streaked away to plant the ball beyond John Fallon for the only goal over two legs in a European Cupquarter-final after a stalemate at the San Siro.

“And, yes, I was there when Jacki Dziekanowski fired in four splendid goals – and Celtic went out of Europe on the goals away rule against Partizan Belgrade, losing 2-1 away from home and winning 5-4 in Glasgow.

“And so on. It sounds like the same old story, but, on this occasion, it is far removed from doom and gloom. Celtic are on the verge of a record-equalling ninth successive title and three games away from victory in the Scottish Cup.

“A truly phenomenal quadruple treble is within the grasp of this Celtic team.

“By all means everyone is entitled to his or her opinion on a disappointing evening in the east end of Glasgow, but, please remember, we are talking about a set of players who have won the past TEN domestic honours.

“They step back onto the trophy trail when they visit Perth to face St Johnstone in the Scottish Cup quarter-final on Sunday.

“The Celtic support is the best in the world when it comes to rallying round for the cause. They’ve got a monumental role to play in the weeks and months ahead.”

* Alex Gordon’s Celtic books include ‘THE LISBON LIONS: The 40th Anniversary’, ‘IN PRAISE OF CAESAR: The Billy McNeill Tribute’, ‘CELTIC: The Awakening’, ‘THAT SEASON IN PARADISE’, ‘THE HISTORY BHOYS’ and ‘TREBLE TREBLE’. He has also co-authored the autobiographies of Davie Hay, Bertie Auld, Tommy Gemmell and John Hughes.