Celtic Quick News on News Now
You are at:Home»Football Matters»LISBON, FIFTY YEARS ON, CELTS GO ON AN EMOTIONAL PILGRIMAGE
By CQN Magazine on 6th May 2017 Football Matters

MY dad went to Lisbon and Milan.

Hello to all CQNrs. Long time lurker here, now is the right time to post my story of my memories of Lisbon.

This story is inspired by BRTH , thank you Jim for all the help that you have given me with my Lisbon booking. It will be both an emotional pilgrimage for me and a short holiday break as well.

My dad did indeed travel to both Lisbon and Milan to support Celtic. He travelled with his beloved brother Tommy to both games. The Lisbon story obviously remains the favourite. We were a family 8, mum, dad and 6 children, 3 boys and 3 girls aged between 4 and 12. Dad’s trip was paid for by his brother Tommy, who was a confirmed bachelor and had the sense to put a bet on Scotland to beat England at Wembley on 15th April 1967.

With the funds in place, all that was needed was for Celtic to beat Dukla on 25th April in the away leg in Prague and Lisbon was on!

Travel arrangements courtesy of BRTH’s dad’s company Holiday Enterprises went something like this :

Passport; eh, what do you mean passport? We are only going to a game of football ?

As we were at the time, it is hard to put into words the feeling of knowing that dad was going to go away abroad for about a week, in an aeroplane to a foreign country to watch Celtic !

Words cannot fathom the feeling of both dread and excitement.

Would he come back ?

Today’s generation will probably wonder at the apparent naivety of this feeling, but back in the day, for a lot of families this was what it was like.

Dad was a handsome man. Can anyone remember the cult TV programme from the late sixties, The Champion, starring Alexandra Bastedo, William Gaunt and Stuart Damon?

Well if you check out the actor Stuart Damon from that programme that is what dad looked like, maybe not as tall. Jet black brylcreemed hair, white shirt, thin lapels, skinny tie. Yes, dad feeling champion, set out looking like a champion to support the champions in their quest to become champions of Europe.

Back home things were bit more basic as we sat in our ground floor tenement living room around the wee 20 inch black and white 2 bob slot meter telly complete with an indoor aerial.

Why mention the aerial? 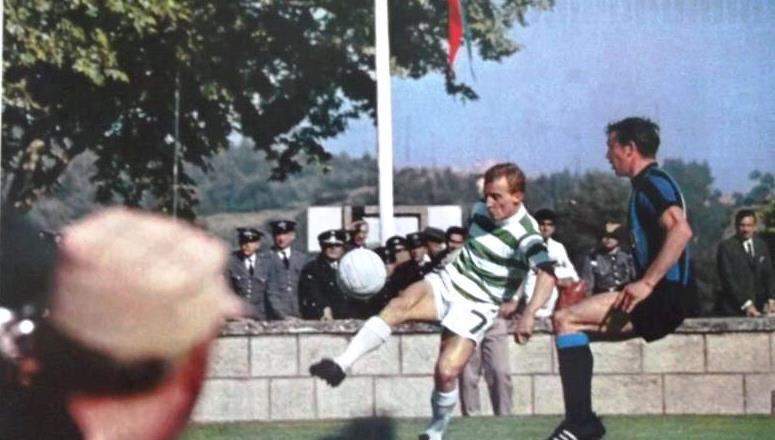 Well during the second half our budgie Cheeky decided to go for a wee fly round the living room.

It’s 1-0 to Inter, we are all wound up desperate for the equaliser.

Cheeky decides to land on the aerial for a better view.

The aerial is precariously placed on top of the curtain pelmet for the best TV reception.

Crash bang wallop, down comes the aerial, we lose the picture.

Well what do you expect, Cheeky was blue and white after all!

As I was the tallest, I was dispatched to pick the aerial up to get the picture back by standing with my right arm fully extended for the rest of the match. My arm still sore to this day! 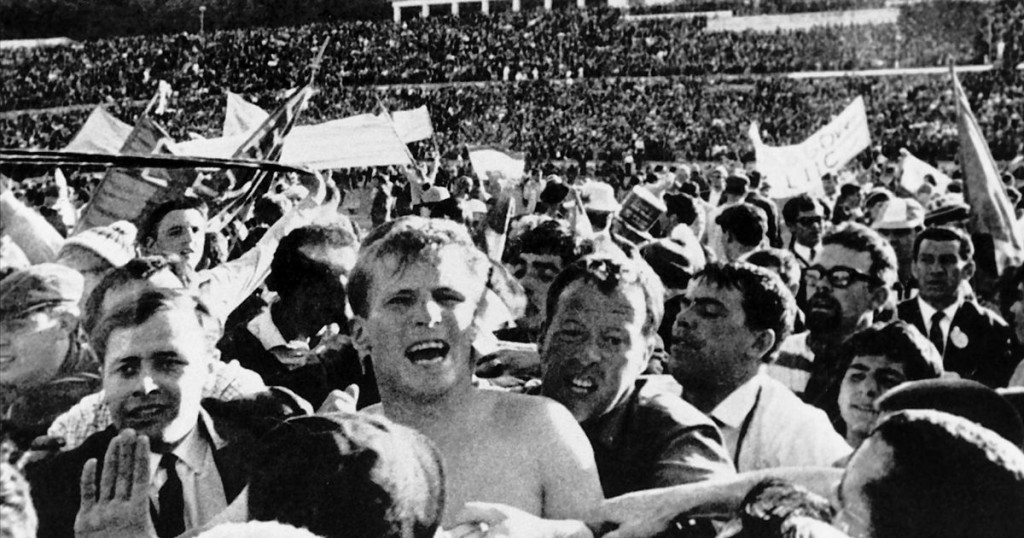 As the great song goes ‘’ It was one Thursday Night……and we won !‘’

Their beloved Celtic had done it, and they were there with thousands of other Celtic supporters to witness and experience it.

The only down side was that in their rush for the departure gate (airport bar anyone?) they had left a carrier bag with the presents from Lisbon for the children in the departure lounge. Medallions and pennants for the boys and Portuguese peasant dolls for the girls. Too bad we thought, but dad was back home and we were The Champions of Europe!

However, fate took another wee turn in our story.

My dad was a vivid Celtic View man, and in the letters section a couple of weeks later he found a letter from a kind Celtic supporter who had found the carrier bag in the departure lounge and who had put two and two together and had brought the bag back.

‘’If anyone knows who this bag belongs to, please call this number.‘’ 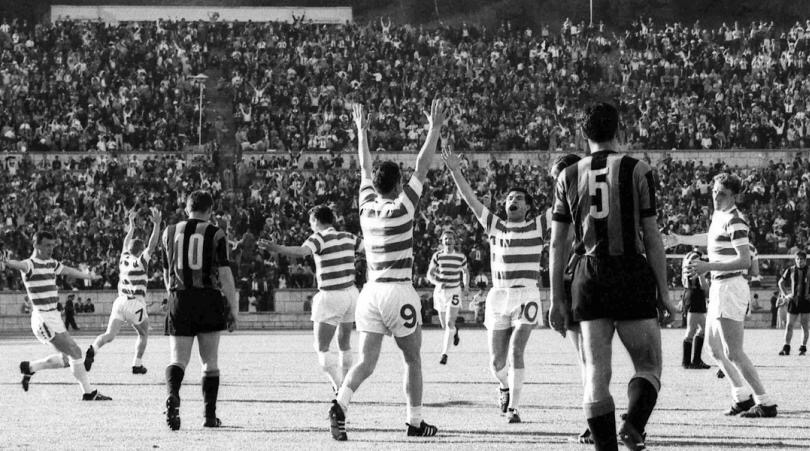 A telephone call later, a car pulls up to the house, and the carrier bag with all the presents intact are safely delivered to dad’s children in the middle of June!

It’s a shame that we never got to find out who this kind stranger was. A Celt through and through. In the modern day he would undoubtedly be a CQNer.

Life got tougher for us 11 years later. Uncle Tommy died if a sudden brain haemorrhage aged 56, my dad aged 52 two weeks later died from the leukaemia that he had been fighting the previous 4 years.

Dad could battle the leukaemia, but with Tommy dying so suddenly just finished him.

As brothers, they were inseparable and great mates. They travelled to support the Celtic whenever they could, and travelled to both Lisbon and Milan to witness in my opinion, the greatest Celtic squad ever.

Both are buried together in St Andrew’s Cemetery in Dumfries, less than a mile from the Mount St Michael Cemetery where Brother Walfrid is buried. This seems just so apt.

So later this month I travel to Lisbon to not only celebrate Celtics famous victory, but to also try to follow in dad’s and Uncle Tommy’s footsteps from that crazy week 50 years ago. 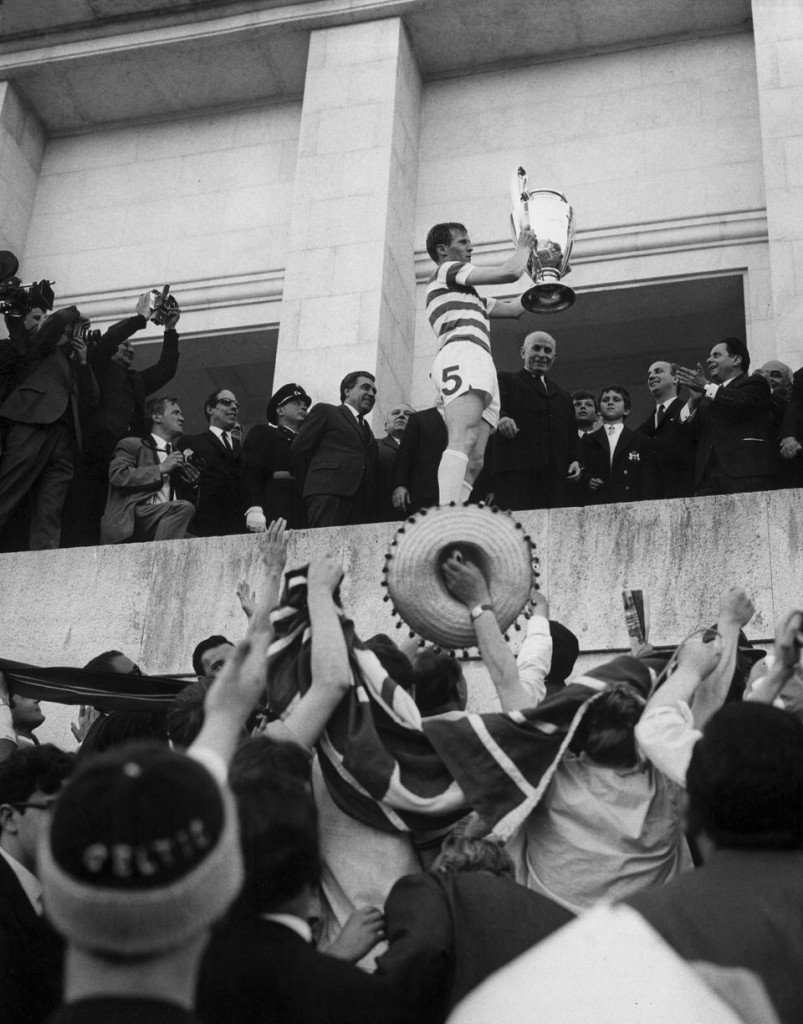 It also feels right that I travel as a CQN blogger and can join in the BRTH CQN dinner where no doubt we will all exchange many many stories from back then.

It is going to be some week, with much rejoicing and partying. I can’t wait. As Jobo on here would say, how many sleeps?

God Bless you dad, I was too young to ever buy you and uncle Tommy a pint, but I guarantee that I will raise a glass for you both in Lisbon 50 years on. Por Cierto. Will have you both prayed for at the Lisbon CQN mass too.

That will do for me.

Written by TC as his debut post on Celtic Quick News this week. A long term lurker TC has given us his blessing to run the post as a feature on CQN Magazine.