Celtic Quick News on News Now
You are at:Home»Lions & Legends»LISBON LION, JIM CRAIG IS HERE FOR TEN IN A ROW!
By CQN Magazine on 10th December 2017 Lions & Legends

JIM CRAIG is the latest former Celtic star to take part in Scotty Alcroft’s #10IAR interview for CQN. Jim released his new book, Jim Craig, Right Back to 67 – The Lisbon Lion Diary on CQN Books this week and you can get a signed copy from CQNBookstore.co.uk. It’s also available from all official Celtic outlets. Here’s Jim Craig’s very own #10IAR…

1. How did the move to Celtic come about?

I had been asked to sign by Celtic just after I captained Scotland U-18 schoolboys against England in 1961. I was just about to start my dental course at Glasgow so was quite worried about juggling the two. So I played as an amateur for the Third Team in season 1961-62 although I did not report for training, doing that on my own. Then I dropped out of football altogether for a couple of seasons before the club came back with an offer in late 1964. As I only had only 18 months to go of my studies I decided to take the chance and signed for the club on 7th January 1965.

2. Did you find it difficult to complete your Dentistry studies whilst trying to play Football also?

Very difficult…and I’m sorry to say there was not a great deal of consideration from either side, both of whom seemed to feel that I should not be doing the other! 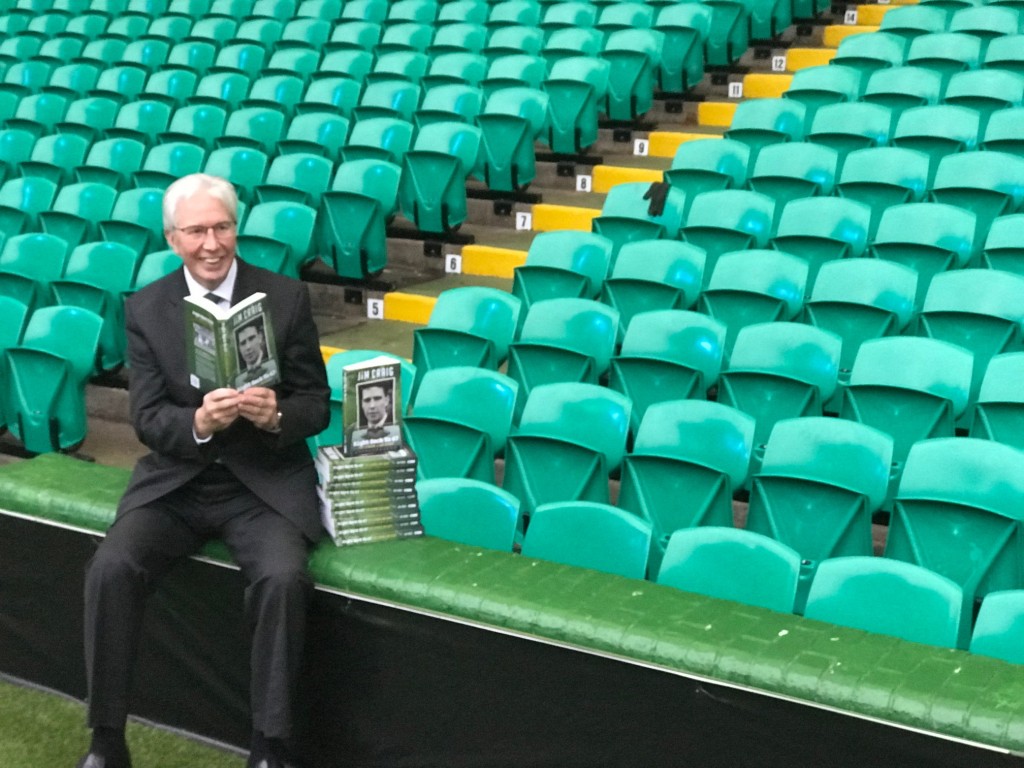 3. What can you remember about the day you finally signed full time for Celtic?

It was a freezing cold night in January. The inside of Celtic Park was certainly not illuminated
quite as brightly as it is today, the dealings were done by Sean Fallon with Jimmy McGrory in the background, I signed for the sum of £8 per week and I travelled to and back home from the park by bus.

4. Your nickname at Celtic was “Cairney”, how did that come about?

When I came into the first team later that year there was a series on TV called ‘This Man Craig’ with Scots actor John Cairney playing the lead. So, the football ‘This Man Craig’ became ‘Cairney’.

5. Mr McGrory signed you and then Mr Stein took over, how long did it take you to win Big Jock over?

In an interview I completed just before his death 1985, Jock Stein told me that his ideal method of playing was football was based on the Real Madrid side which had beaten Eintracht Frankfurt 7-3 at Hampden in 1960, when, with the exception of the centre-half, every other player should have the ability to join in all the moves. So, as I had always ben a defender who liked to come forward, that style suited me right down to the ground.

6. Just how influential was Big Jock for you?

Many people have asked similar questions for years and have often asked the extent of Jock Stein’s involvement. I can say – quite unhesitatingly – that without Jock Stein, none of the great success would have happened.

7. The Penalty!! We can’t have you on without asking haha. The 67 Final, was it a Penalty or not?

It was not a penalty, it was a mere collision of two players going for the ball. In fact, it was one of the worst-ever decisions in European football! In the stands behind one of the goals, my Dad turned to his brother-in-law, my Uncle Philip, and said rather angrily “I have come all this bleeding way to see that!”

8. Who were the characters in the dressing room during your time? Any funny stories?

We had a great dressing-room in terms of both ability and charisma with everyone capable of playing a part. I was thought of as quiet; in fact, I am not quiet…I am just not as unbelievably noisy as some of the others. Favourite moment -the Boss had just given a fairly detailed presentation of the system and style of play of our next opponent in the European Cup when wee Jimmy raised his hand. A surprised Boss said “ you want to ask something, Jimmy?”. “Yes, Boss” Jinky replied “how long is the flight to this place?”

9. You have a new book out, Jim Craig – Right Back to 67, The Lisbon Lion Diary. Can you tell us a bit about that and how it came about happening?

The book is a resume of the year 1967, written in diary form and covers my involvement in the team during that momentous year. The first part covers the last six months of the wonderful season of 1966-67, then goes on to deal with the first six months of season 1967-68. During this latter period, we hit the floor against Dinamo Kiev in the European Cup and had a nightmare of a time in South America against Racing Club. However, after that trough, we did pick ourselves up and went through the rest of year undefeated in the league, having already won the League Cup.

10. Finally Jim, what do you think of the job Brendan Rodgers is doing and the current Celtic side?

Brendan Rodgers is doing a great job with Celtic, the League Cup is already in the bag and we are on song for another treble. Unfortunately, apart from Celtic Park, there is not a great deal of money in Scottish football at the moment and this creates a problem. Celtic do not receive enough competition from the other teams in the league and that means that when we do go into Europe, it is difficult to raise our game to meet the higher standard. It would be wonderful if we could become involved in the Premier League or a European version but in the meantime, let’s enjoy what we are seeing in our domestic game.

LISTEN TO JIM CRAIG ON THE CQN PODCAST – IT’S OUTSTANDING!