CELTIC went to the Premiership pinnacle for the first time this season – but it was not a performance that will live long in the memory banks after a scoreless stalemate against resourceful opponents in West Lothian this afternoon.

The Hoops, with a game in hand, are now on top from Hearts on goal difference after getting a point on a dodgy surface that was a great leveller.

When the most expensive player in the country continually struggles to bring a simple ball under control – as £9million Odsonne Edouard did throughout the 90-odd minutes – it tells you everything.

The champions huffed and puffed, but Livi demonstrated why they have conceded only two goals at home in this campaign as they fought, growled, chased and fought for everything.

And when Brendan Rodgers’ men did make the breakthrough, goalkeeper Liam Kelly was there to repel them with a fine display. 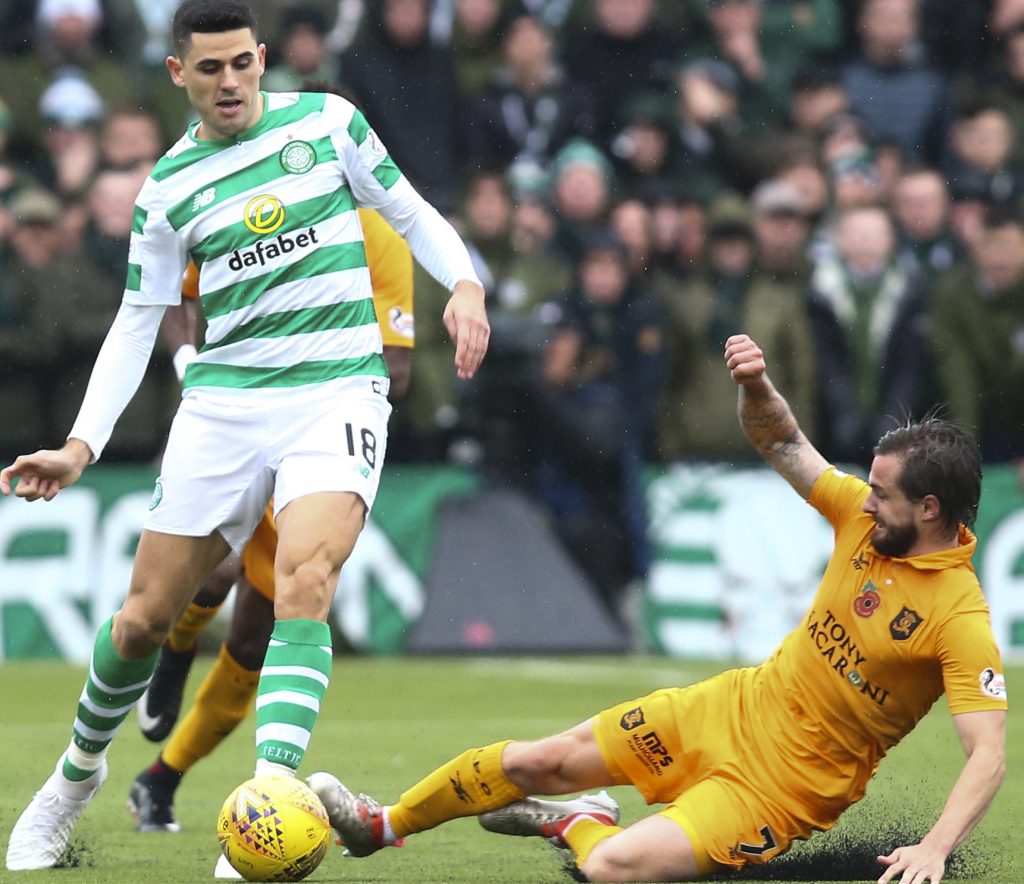 CRUNCH…Tom Rogic braces himself as Keighan Jacobs throws himself into a challenge.

As anticipated, the home side set out to be aggressive and get in about the visitors. However, they were extremely fortunate to still have 11 men on the field after the 24th minute following an incident with battering ram striker Dolly Menga and Ryan Christie.

As the Hoops rearguard regrouped to to deal with the menace of yet another long throw-in by Alan Lithgow, the Belgian striker clearly thrust his head into the midfielder’s face.

His crazy action was caught by TV cameras and it was fortunate for the attacker referee Kevin Clancy and his assistants missed the moment or there would have been no argument against instant dismissal.

It is to the Celt’s credit he did not go down and make the most of his opponent stepping out of line.

Menga escaped during the game, but he is unlikely to be so fortunate if his foolhardy action is reviewed by the SFA compliance officer.

It was never going to be a memorable confrontation on a horrible surface and it didn’t take long for Livi to get in about it as James Forrest was flattened in the fifth minute by Lithgow. Clancy had a word with the defender, but it could so easily have been a yellow card for such a cynical foul.

Christie and Tom Rogic were also on the receiving end of strong challenges as the Hoops attempted to put their game-plan into practice.

Ironically, the only booking of the first-half was dished out to Shaun Byrne for an obvious dive on the edge of the box as he was about to be tackled by Dedryck Boyata. The match official was only about 10 yards from the incident and had no option but to flash yellow.

On the half-hour mark, only a great save from the sprawling Kelly prevented the champions from taking the lead.

Edouard slid a pass in front of Christie and the rampaging Celt fired low to the keeper’s right, but he got down well to block the drive and Rogic’s follow-up effort was deflected for a corner-kick.

Five minutes later, Scott Sinclair was sent through at the angle after a neat one-two with Edouard and yet again Kelly did well to repel the danger. 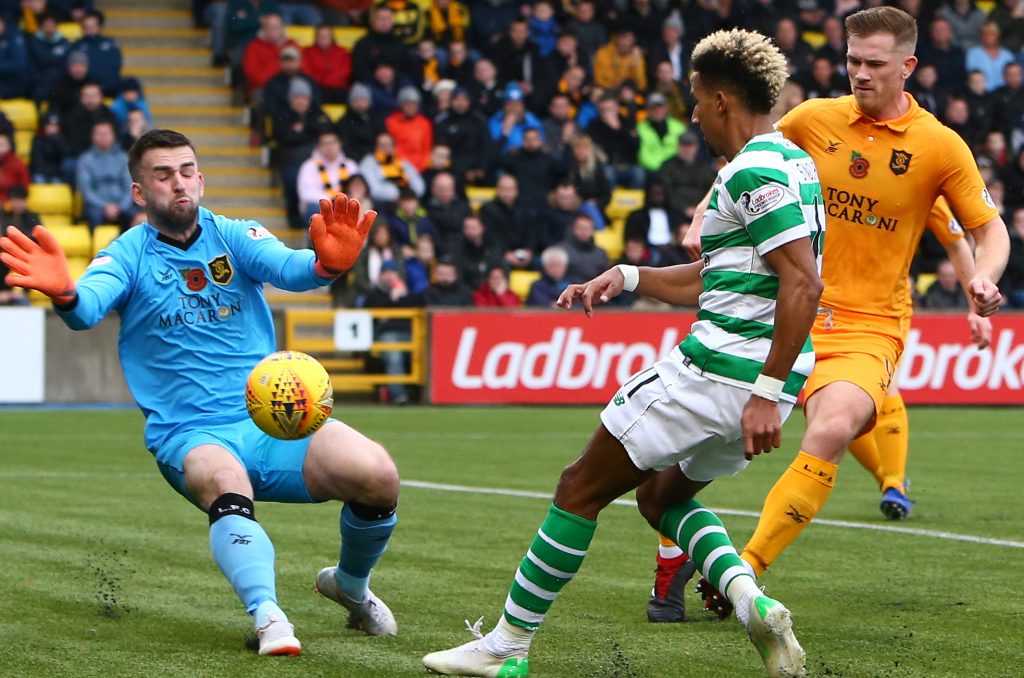 WALLOP…Scott Sinclair crashes in an angled drive as keeper Liam Kelly comes out. 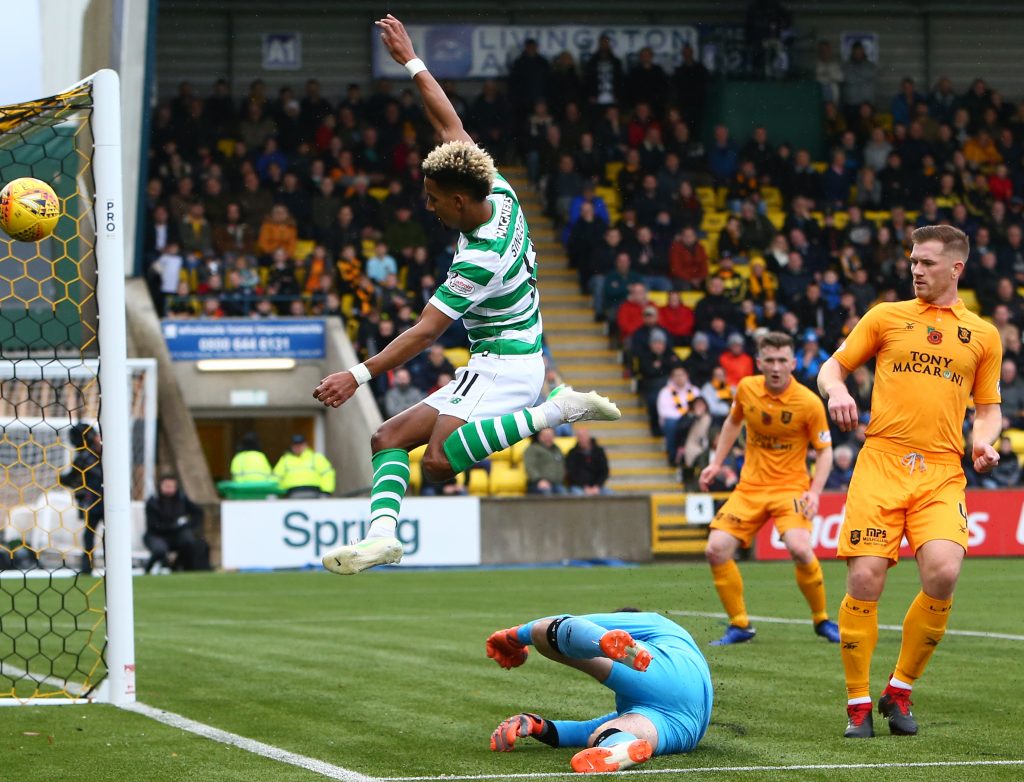 UP, UP AND AWAY…the ball rebounds off Sinclair and bounces to safety as Livi escape.

Declan Gallagher threatened the Celtic goal twice in as many minutes following corner-kicks. He outjumped Kristoffer Ajer to the first, but Scott Bain turned the header over the bar.

And the keeper did likewise with another attempt from the resultant deadball kick.

Gallagher, remarkably, got his head to a third corner-kick and Bain made a flying save to his right, but the ref blew for a foul by Menga who pratically  bundled Christie into the net at the near post.

A minute from the turnaround, Rogic slipped a neat pass into the tracks of Forrest, but he blazed over from a tight angle. 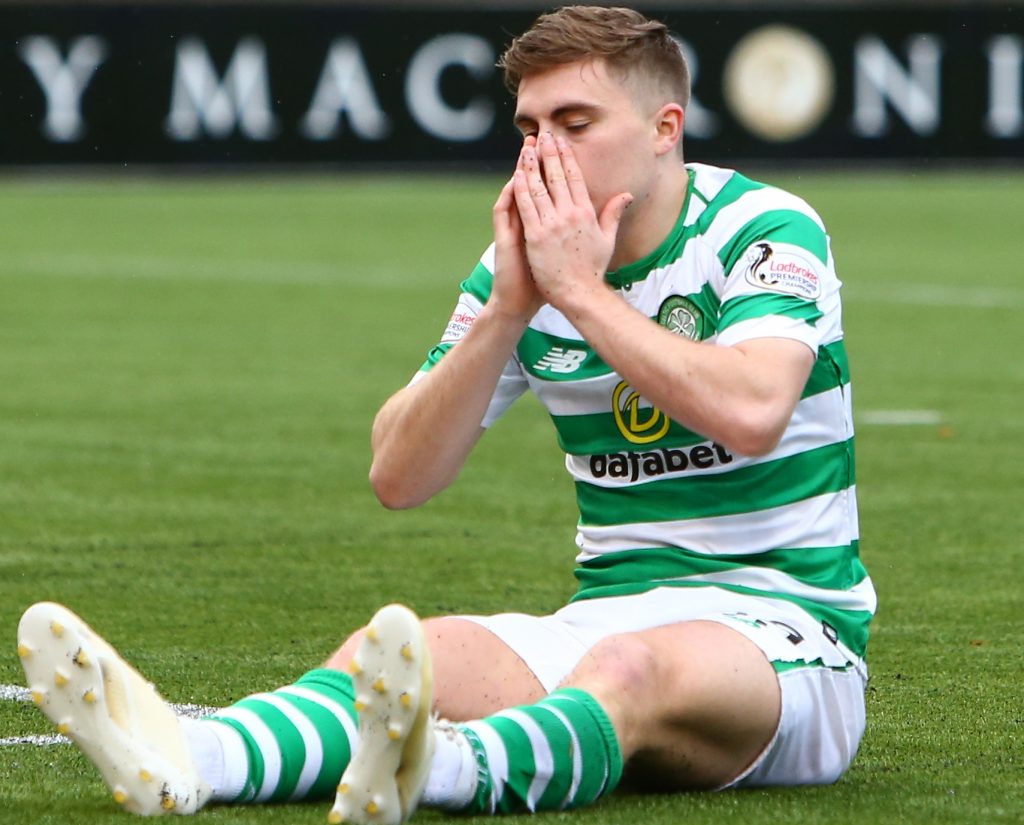 FALL GUY…James Forrest sits this one out. Pics: Geo.

It was much the same after the restart. Rodgers made his first change just after the hour mark when he replaced Forrest with Lewis Morgan and the Hoops manager was forced into another change in the 72nd minute when Ajer was helped off after being hit on the cheelbone by Craig Halkett’s head in an accidental collision.

Filip Benkovic came on as the visitors went in search of that elusive goal.

In the 65th minute, Kelly changed direction when he was going left, but had to somersault to his right to push away a swerving 20-yard drive from Christie.

In the 85th minute, the keeper did even better as he spectacularly turned a swirling effort from Rogic over the bar and then Sinclair’s direction was awry as he tried to first-time a cross from the Aussie. The attacker’s shot was closer to a throw-in than Kelly’s goal.

And the game ended with Morgan firing waywardly over the crossbar.

Brendan Rodgers has often said he has never seen a classic match on an artificial surface.

This game is unlikely to have had the manager changing his mind.