IT was a long time coming, but it was well worth the wait as Celtic won in West Lothin for the first time in six visits.

All eyes were on the Hoops as they stepped onto a potential banana skin against their so-called jinx team at their hoodoo ground ths afternoon.

There was no slip-up on this occasion, though, as Daizen Maeda and James Forrest, with his first league strike of the campaign, plus a deflection from Nicky Devlin got the goals that pushed Ange Postecoglou’s side back onto a three-point advantage at the Premiership pinnacle with eight games left to play.

This was a must-win encounter and the players did not disappoint as they gave their all in endeavour, spirit and attitude.

It was Maeda who managed something in the 17th minute Celtic couldn’t acheve in their previous two games against Livi this season – score a goal.

And the Japanese striker’s lightning-swift reflexes saved the blushes of Callum McGregor who had blown a glorious opportunity to open the scoring only three minutes earlier when he squandered a penalty-kick.

BREAKTHROUGH GOAL…Daizen Maeda is in the net with the ball after claiming the opening strike against Livingston.

The award was made after referee Nick Walsh adjudged the grounded Jack Fitzwater had handled a goalbound effort from Maeda.

With usual penalty-taker Josip Juranovic sitting on the substitutes’ bench, the skipper, who had previously missed from the spot in the 2-0 Europa League match against Ferencvaros at Parkhead in October, accepted the responsibility.

A nervous-looking McGregor didn’t appear comfortable as he stepped forward before smacking a misdirected effort off the keeper’s left-hand post.

Inside a minute he had the chance to make amends when Filipe Jota, who had been lively and dangerous on the left throughout the day, picked him out with a pinpoint cross. However, the unmarked midfielder, from just about the penalty spot, thumped a header woefully over the bar.

It was then that Maeda showed him how it was done with the crucial barrier-breaking effort. Once again, Jota was involved with an inviting corner-kick from the right wing.

Carl Starfelt met the ball perfectly with his forehead at the near post to glance an effort goalwards. Max Stryjek threw himself acrobatically to his right to push the ball into the air.

And that was all Maeda required as he raced in to bullet an unstoppable effort into the net from practically under the crossbar.

There was a mixture of delight and relief when the frontman netted his fifth goal since his Hogmanay arrival at the Hoops. 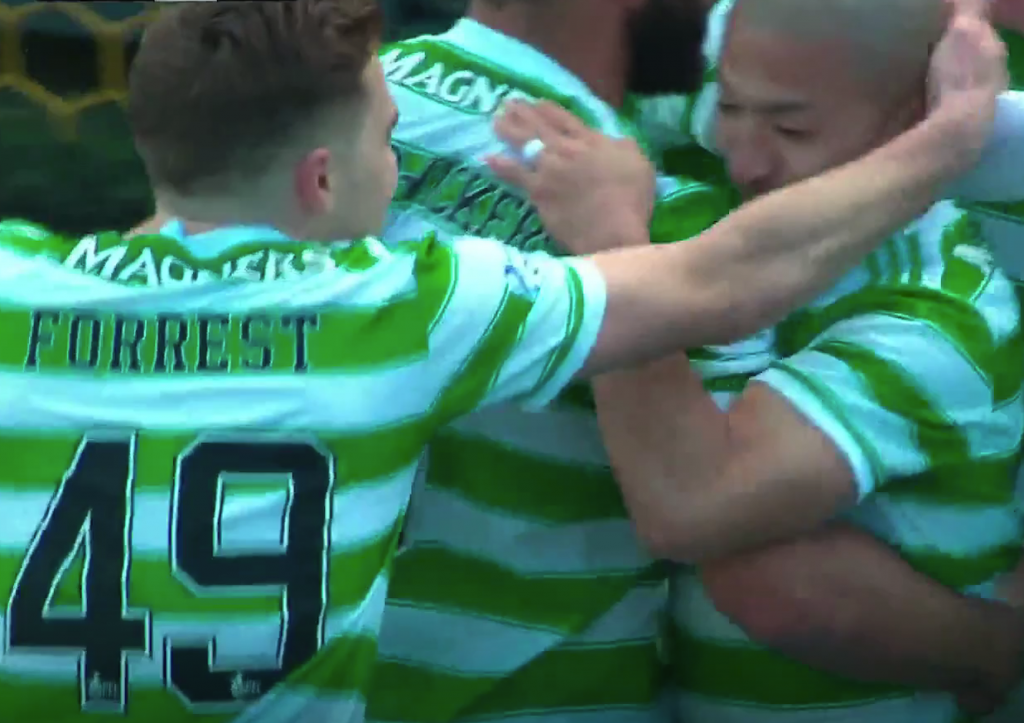 THAT’S OUR BHOY…James Forrest joins in the celebrations after Daizen Maeda’s barrier-breaking header in the win at Livingston.

Joe Hart had been forced to pull off a brilliant reflex save in the in the seventh minute when Livi managed to get an attempt on target after Celtic had started strongly with Nir Bitton and Tom Rogic busy in midfield.

However, the defence switched off when a right-wing corner-kick from Alan Forrest, brother of James, dropped into the penalty area and Ayo Obileye managed to stick out a foot and prod the ball towards the left-hand corner of Hart’s net.

The experienced netminder was a blur as he got across his goal to get a hand to the ball to divert it past the far upright for another corner-kick.

The only other time he was in danger in the opening half came in first-half stoppage-time when Forrest needlessly gave away a free-kick on the Livi left. The experienced campaigner must have realised set-plays are a massive ingredient in the opponents’ armoury, but he kept a foot in to bring down James Penrice.

OH, GEE…Celtic players celebrate as Nicky Devlin deflects the ball beyond his own keeper Max Stryjek for the second goal.

FANFARE…Celtic players celebrate the second strike with their supporters.

The ball was duly delivered into a packed penalty area, but, amazingly, Obileye found himself isolated as he rose at the back post to send a header past the stranded Hoops keeper.

Thankfully, the defender’s elevation was just off and his attempt cracked off the face of the crossbar and hurtled off to safety.

Within 28 seconds of the turnaround, the Hoops had doubled their advantage following a superb flowing move that involved Starfelt, Maeda, Rogic, Forrest and Ralston as they sliced through the Livi back lot.

The right-back fired in a cross that took a nick off Obileye at the near post and fell behind intended target Maeda. The deflection, though, took Devlin totally by surprise and the ball hit him on the chest and ricocheted beyond the startled and helpless Stryjek.

In the 55th minute, the visitors were celebrating once more when Forrest claimed a third goal to keep his astonishing run going of scoring in every one of the past 13 seasons.

McGregor won a challenge with the persistent Srephane Omeonga in the middle of the park and released Jota with a neat pass. The Portuguese flyer didn’t hesitate as he placed the ball in front of Forrest racing into a good position in the box.

The Scotland international dragged the ball wide before sliding a low left-foot angled drive past Stryjek for only his fourth strike of the campaign in all competitions. 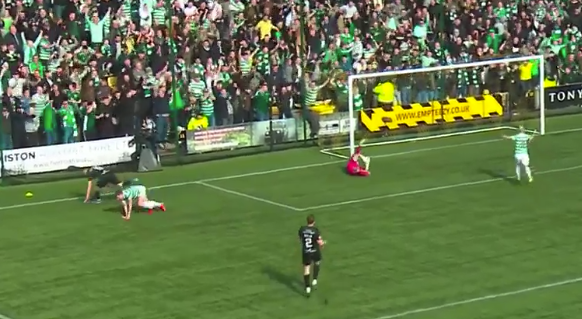 PICK IT OUT…James Forrest prepares to race away after angling a low drive past the helpless Max Stryjek for number three. 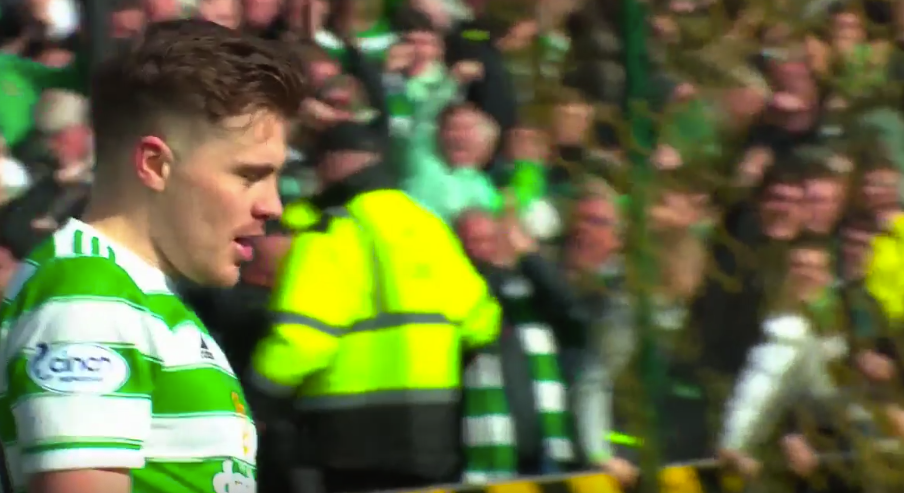 HAPPY DAZE…James Forrest reflects on his first Premiership goal of the campaign.

Celtic, however, were punished within two minutes when they gifted the home side a goal with some unacceptably sloppy defending. Devlin launched yet another long throw into the box from the right and it was knocked down into the box.

Andrew Shinnie reacted quicker than anyone else to prod the ball past Hart from about two yards to cut the visitors’ advantage to two.

Postecoglou made a triple change in the 75th minute when he sent on Giorgos Giakoumakis, Matt O’Riley and Liel Abada for Maeda, Rogic and Forrest and eight minutes later Reo Hatate was introduced for McGregor.

Abada almost marked his presence with a goal in the 80th minute when he walloped a rebound goalwards, but he was denied when the alert Stryjek punched the ball off the line.

When the smoke of battle cleared, Celtic had done a very professional job on a dodgy surface to continue their pursuit of their tenth title in 11 years.