A STOPPAGE-TIME goal from Tom Rogic threw Celtic a lifeline at Livingston tonight in a strange twist in the race for a ninth successive title.

The Hoops dropped two points to Gary Holt’s men, but gained one at the top of the Premiership to go THIRTEEN clear with the news Hamilton Accies had won 1-0 at Ibrox.

It was hell in Livi again for most of the time for the Hoops as they struggled to break down a 10-man defence who weren’t too fussy in how they cleared the danger.

Celtic showed they were up for the battle right from the start and only a controversial goal following a clear foul throw and the woodwork prevented the Hoops from going in with a lead at the interval.

Neil Lennon’s men were out to prove they would not be bullied as they were in October when they slid to a 2-0 loss. They were slick and quick on the artificial surface as they controlled possession for huge chunks of the encounter.

In the fourth minute Callum McGregor sent Greg Taylor away on the left and his low cross was just cleared by John Guthrie at the near post as Mohamed Elyounoussi waited to pounce.

Christopher Julllien was commanding in the air and Scott Brown was snapping into challenges as the visitors dominated. 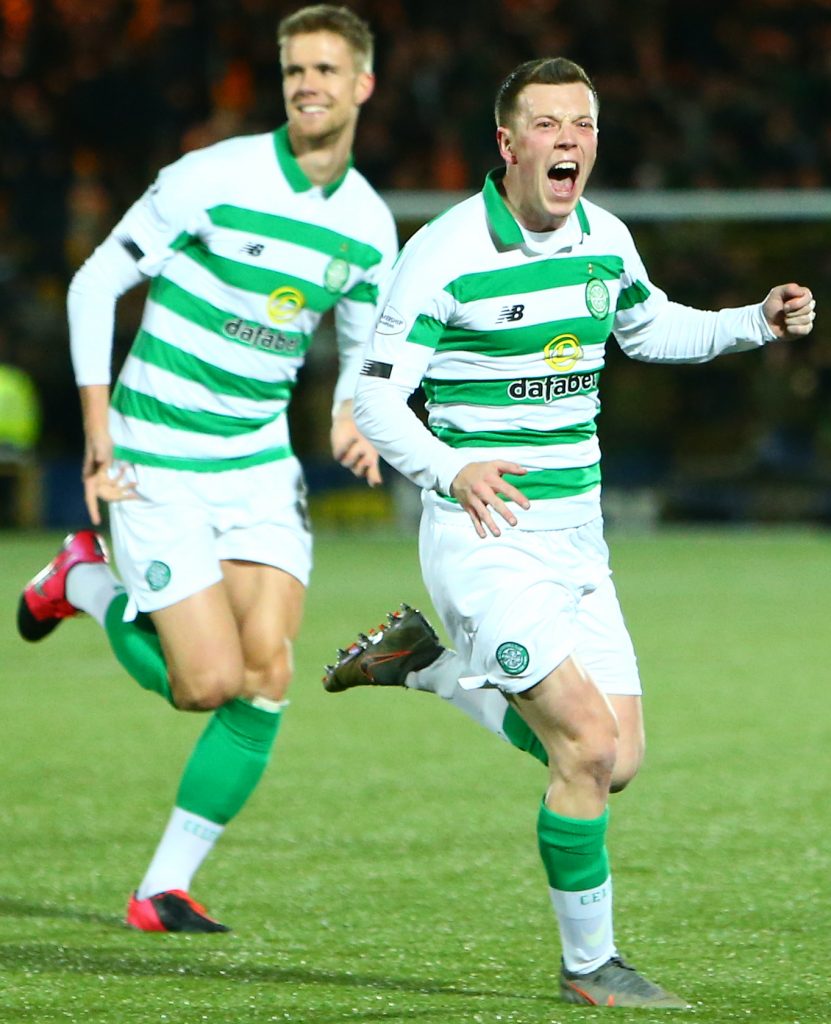 SOMETHING TO SHOUT ABOUT…Callum McGregor roars with delight after firing in the opening goal with Kristoffer Ajer about to join the celebrations.

Amazingly, though, Livi went the closest to opening the scoring in a 15th-minute breakaway when Ryan Christie was clipped by Scott Robisnon in the build-up, but referee Willie Collum waved play on. The Livi player advanced to the edge of the box before drilling in a low effort, but Fraser Forster was alert to the danger and swooped to push the ball round the post.

However, within a minute, the champions took the lead with a brilliant effort from McGregor. A cross from Taylor wasn’t cleared properly by the Livi back lot and the ball fell to the midfielder. Cleverly, he shaped to go left before a quick switch in direction as he lined up a right-foot effort from just outside the box.

He struck the ball with awesome power and it raged over the right shoulder of diving Robbie McCrorie as it ripped into the net for his 12th goal of the campaign.

Within moments, Odsonne Edouard had the opportunity to add a quickfire second, but the Frenchman was just too elaborate as he displayed his skills and the chance was lost.

In 24 minutes, the Hoops were rocked when Livi equalised with a goal out of nothing that should have been ruled out by the match official. Kieran Brown fired in a left-wing throw-in and Forster looked to be barged by Guthrie in the box. Unfortunately, the ball dropped perfectly for the defender to hook into the empty net. 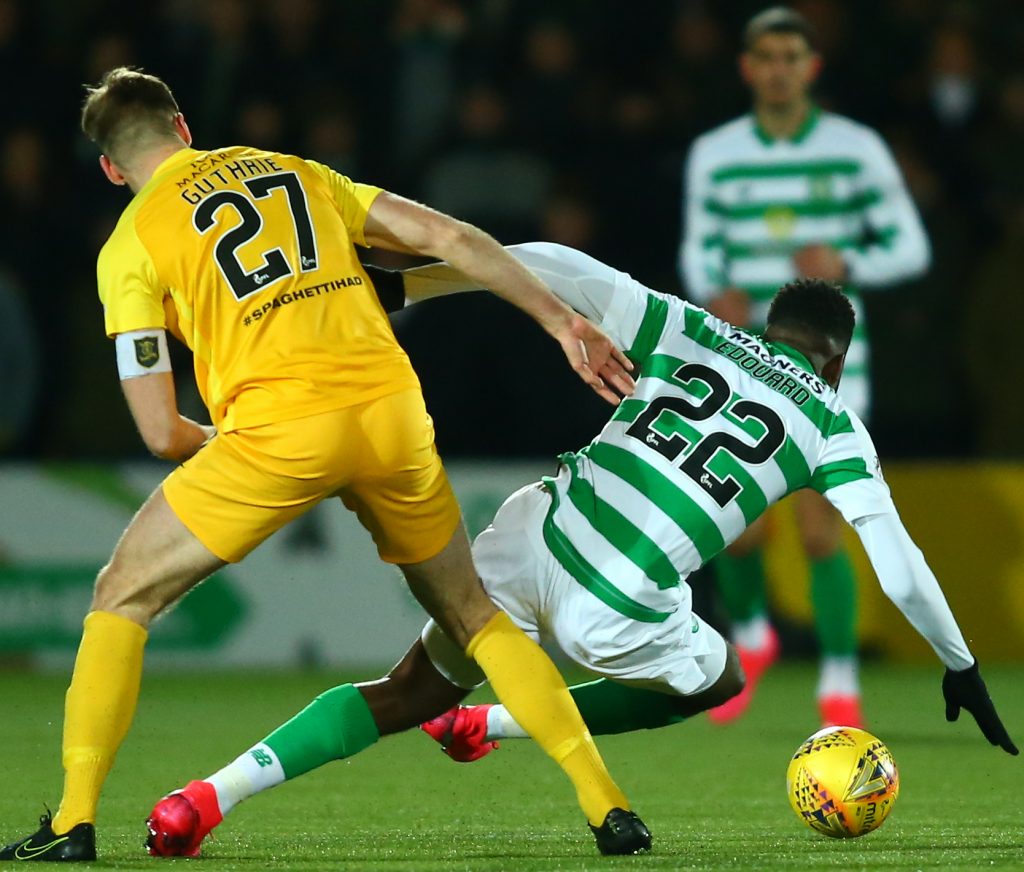 CRUNCH…Odsonne Edouard hits the deck after a challenge from Livi defender John Guthrie.

It was clear Brown’s shy was a foul with one of his feet well off the ground as he delivered the ball into the box.

It was a horrible goal to concede, but, unfortunately, Celtic appear to be making a bad habit of losing such awful goals at this ground.

However, only the woodwork stopped them from going ahead for a second time just before the interval when McGregor robbed Steve Pittman of the ball and raced 40 yards before setting up Edouard on the edge of the box.

The Frenchman took a couple of touches before bending the ball around a defender as his effort whipped low past McCrorie, but the attempt smashed off the inside of the left-hand upright and was smuggled to safety.

If the champions felt Dame Fortune was scowling in their direction at that moment, it was nothing to how they felt a minute into the second-half when Holt’s side took the lead.

Jullien, who had played well in the opening 45 minutes, dived in to a tackle on Lyndon Dykes when he should have ushered him to the bye-line. The striker took full advantage of the Frenchman’s slip to whip over a low cross and Scott Robinson was unmarked as he raced in to thump a first-time effort beyond the stranded Forster. 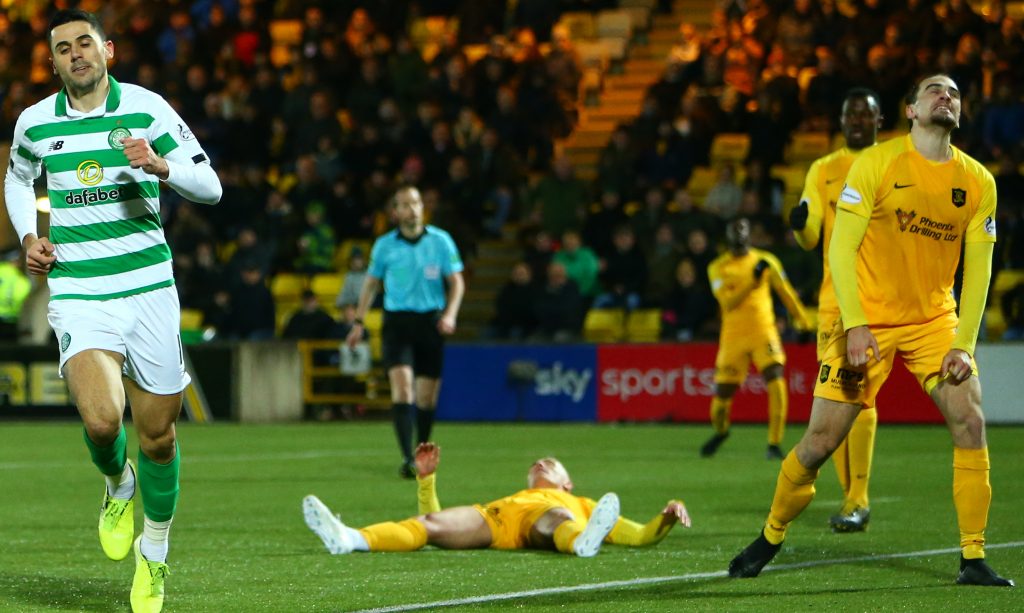 THE EQUALISER…Tom Rogic looks nonchalant as he turns away after hitting the stoppage-time leveller.

And that’s how it stood until a minute into stoppage-time. Celtic had huffed and puffed, but it didn’t look as though they were going to get anything for their valiant efforts.

Lennon threw on Jeremie Frimpong for struggling Taylor and moved Forrest to the left to accommodate the Dutchman in the 62nd minute. Seven minutes later, he introduced Rogic for Elyounoussi who had dropped off the pace.

In the 75th minute, Leigh Griffiths joined the fray when he came on for Christie.

Poor final decisions and last-ditch tackles denied Celtic as they pushed non-stop for the leveller and then a little piece of magic from Edouard finally unlocked a stubborn Livi rearguard.

He turned swiftly to race onto a Forrest pass after a neat flick from McGregor and headed into the left-hand side of the box. His measured low ball was perfect for Rogic and the substitute fired it into the net via a defender.

It was a well-merited point for the champions – and it could prove vital with only nine games to play.