NEIL LENNON has revealed how much skipper Scott Brown means to him and Celtic.

The Hoops boss has warned critics NEVER to write off the 34-year-old midfielder who cost Gordon Strachan a Scottish record transfer fee of £4.4million when he arrived from Hibs in August 2007.

The champions have had value for their money with Brown playing 533 games while making a club record 107 European appearances and winning 19 trophies and three successive trebles.

Prior to the switch from Edinburgh to Glasgow, Lennon and Brown had gone head-to-head on the football pitch for their respective teams. 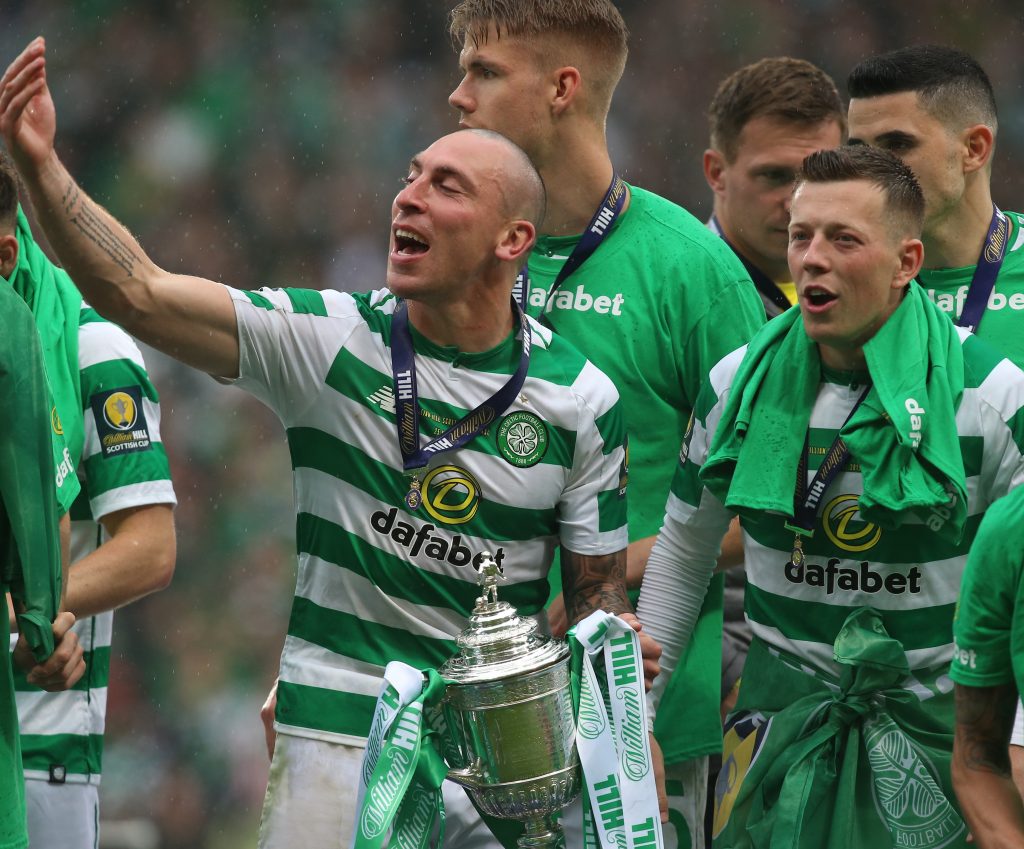 HAMPDEN HAPPY DAZE…Scott Brown celebrates with his team-mates after the Scottish Cup Final win over Hearts in May. 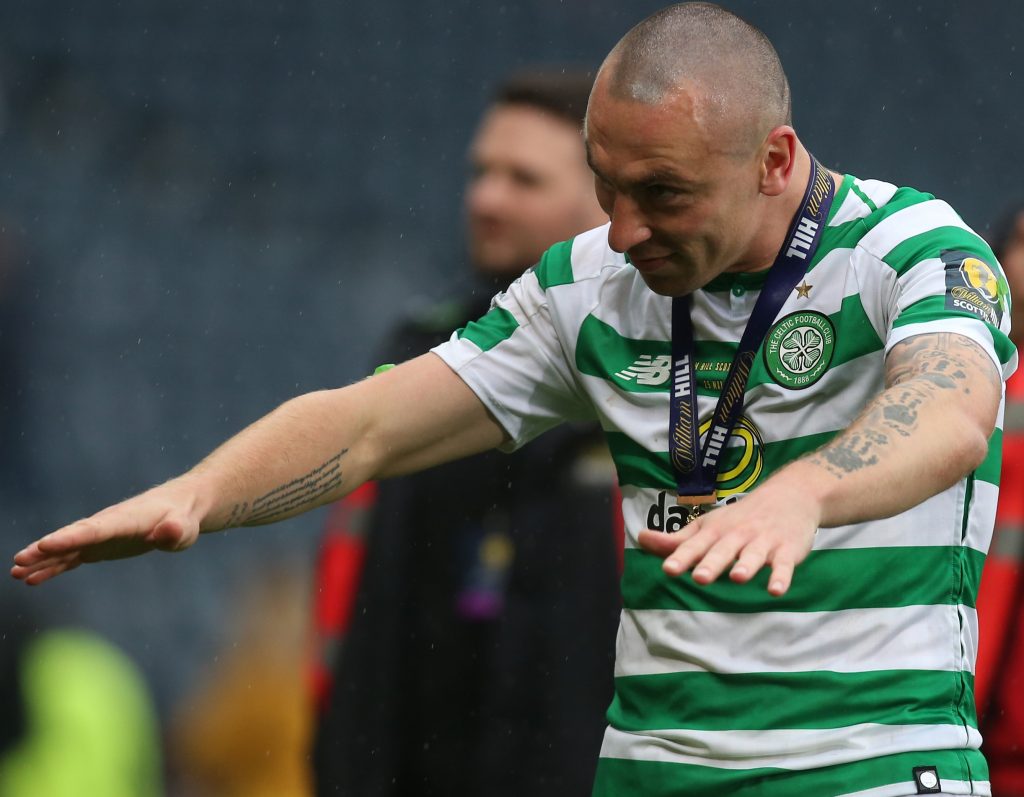 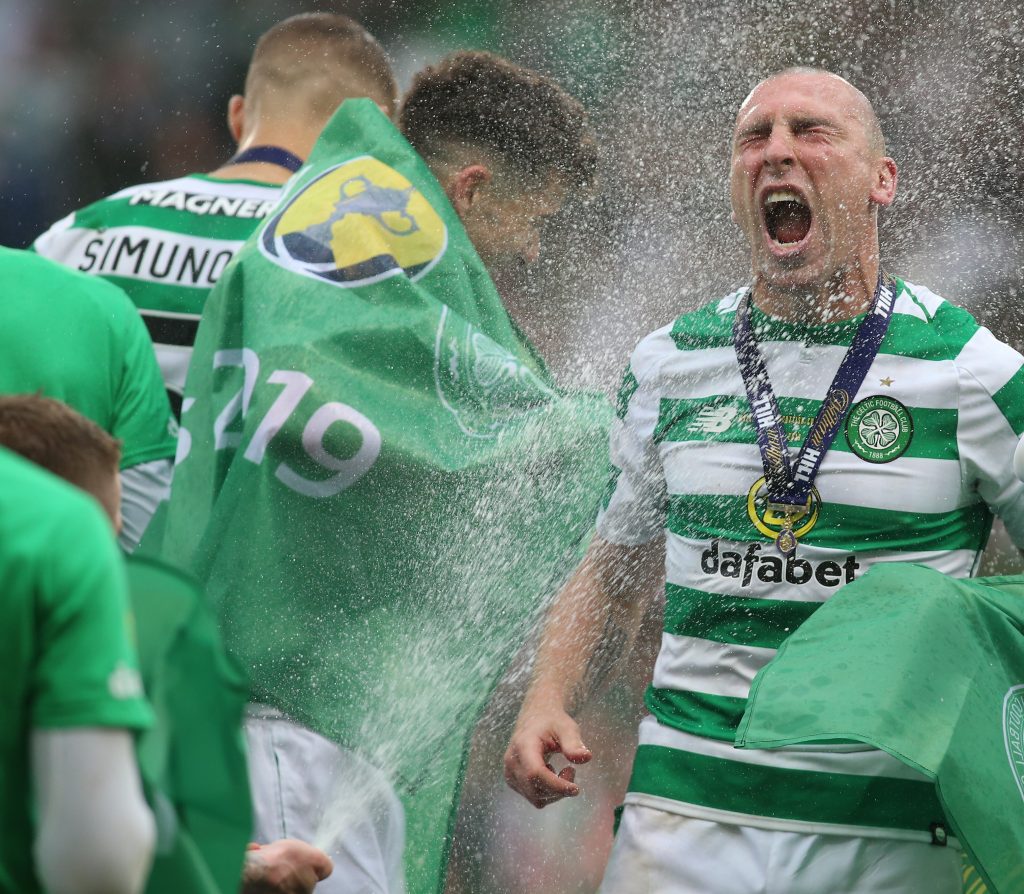 SPLASH-HIT…Brown is splattered by champagne during the celebrations of the treble treble campaign.

The Irishman rated his skipper’s display in the 2-0 triumph at Ibrox as among his best ever and scoffs at those who question the player’s value.

Lennon, speaking to the Scottish Sun, said: “It is so dangerous to write off Broony. He’s got that personality.

“There was a time when he went on a run at Ibrox and it looked like the Scott Brown of 21. It was absolutely awesome.

“Broony was like a 400-metres runner. He started in his own half and it’s fantastic that at 34 he still has that in his locker.

“He ran 50 yards in the 70th minute. I thought he was superb in the first-half, too.

“Scott has the desire and fire, but it’s controlled. His reading of the game, his tackling, which is still a fine art, and I would know a bit about that, is perfect. He was so impressive.” 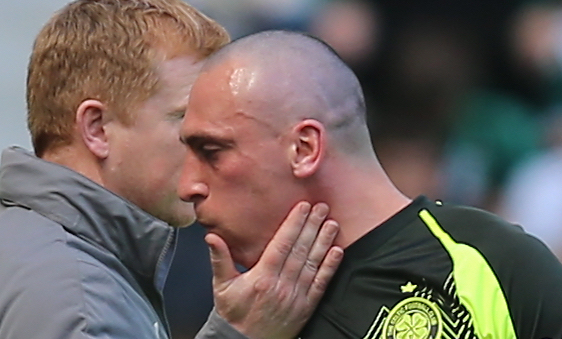 Lennon, who quit playing at 36, looked at the claims the former Scotland international onfield leader’s best days are behind him and added: “It’s ageism. Scott Brown is a man for all seasons.

“When he’s right — and in the main he’s always right — he’s still a fantastic player.

“It’s difficult to play without him at times, but that Sunday at Ibrox was one of the finest games that I’ve seen from Scott.

“I love him – and you know we have a great relationship — a very strong bond with a huge amount of respect and it goes back a very long way.

“I trust Scott and he trusts me. It would take a lot for anything to come between that.

“He’s evolved his game to be that No6 now, where he reads the game and he still covers the ground, tackles, and recycles the ball brilliantly.

“When you really need him, he’s there and that’s really important. Broony’s a big-game player.”