NIR BITTON had a one-word response when he was asked for his view on the hat-trick performance of Leigh Griffiths in Celtic’s 5-0 win over St Mirren yesterday.

“Lucky!” smiled the Israeli international defender as he handed over the matchball at the end of a scintillating striking display for the comeback Bhoy.

His frontline partner Odsonne Edouard and Callum McGregor got in on the act against the Paisley side as the champions hoisted their points advantage at the top of the Premiership to a remarkable 16 with only eight league games to play.

Bitton, who played well again on the right-hand side of defence, told Celtic TV: “Every game we play we try to keep a clean sheet. That’s the most important thing for us. 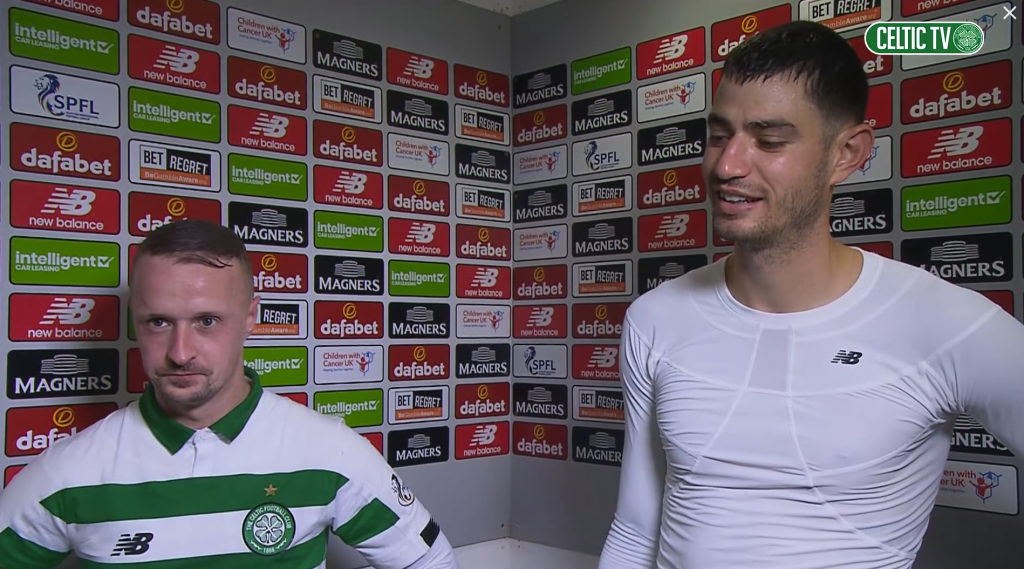 THE JOKERS…Leigh Griffiths and Nir Bitton on Celtic TV after the 5-0 win over St Mirren.

“We try to make things easy for the guys up top and we have a lot of talent up there.

“We trust those guys to score the goals.”

Pressed on what he thought of Griffiths’ striking prowess, Bitton then summed up: “Lucky!”

No doubt the skyscraper back-four operator is hoping his frontline colleague will be just as fortunate at Ibrox a week today, but he is unlikely to extend that to Hampden on March 26.

Griffiths is odds-on to get an international call-up from Steve Clarke for Scotland’s crucial Euro 2020 play-off semi-final against Bitton and his countrymen.

Making the possibility of the meeting even more intriguing, Bitton often plays in central defence for Israel.

Hatem Abd Elhamed, who made his return as a late substitute against the Saints, could also be involved. The outing yesterday was his first appearance since limping off with a groin injury in the historic 2-1 Europa League win over Lazio in Italy in November.

LETHAL LEIGH LASHES IN A HAT-TRICK