The 33-year-old Swedish international defender, who left Parkhead at the end of his contract last summer, has agreed a 12-month deal with the Stockholm outfit.

Lustig, speaking on the club’s official website, said: “I auditioned in AIK already in 2004 and it feels good that it finally gave results.

“The wait has been long, but now I’m finally here.

“I long to wear the black and yellow match shirt.” 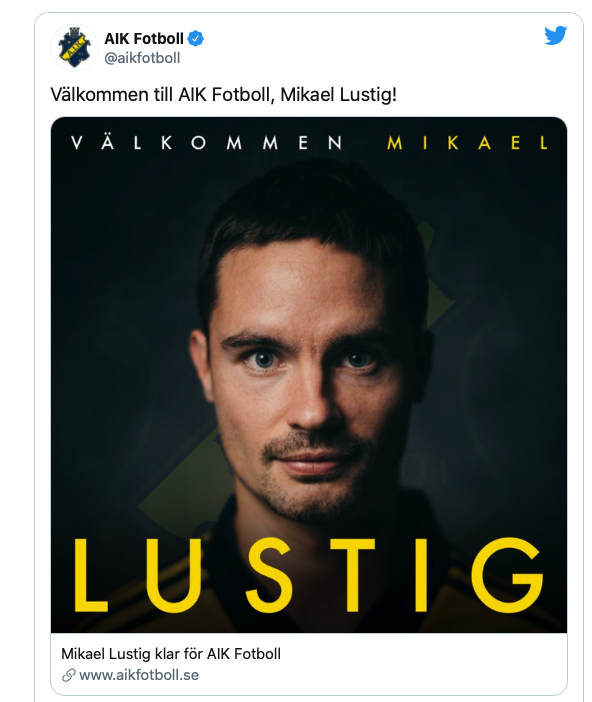 “He is an experienced player with extensive international experience both at club level and with the Swedish national team.

“Mikael is also a leader who with his winning mentality will contribute on the football field and in the development of our young players.

“I am genuinely happy about the great will that Mikael showed to make this agreement possible.”

The dependable right-back was signed by Neil Lennon in his first-time around as Hoops boss from Rosenborg in 2012. He became a key figure in the title-winning sequence and also figured under Ronny Deila and Brendan Rodgers before the return of the Irishman in February last year.

The move comes after news the player had been forced to train with the kids at his Belgian club who had also removed all mention of him off their club website.

Lustig failed to make an impact at Gent and made only 14 league starts in a difficult personal campaign.

* DON’T miss the unbeatable match report from Celtic v Ferencvaros this evening – only in your champion CQN.