A FLASH of genius from Mohamed Elyounoussi in the fading moments in Lyon tonight wasn’t enough to salvage a draw for Celtic.

The Norwegian striker scored a memorable goal as he cut in from the left, dummied Marcelo, tricked ex-Celt Jason Denayer and then walloped in a superb consolation effort.

It was too little too late for the champions, but it was a more than worthwhile exercise for the visitors.

The Celtic defence observed the social-distancing guidelines to a ridiculous extent when old favourite Moussa Dembele was left totally unguarded to open the scoring in the fourth minute.

The rearguard were posted missing when a right-wing cross dropped into the box following the aftermath of a corner-kick. 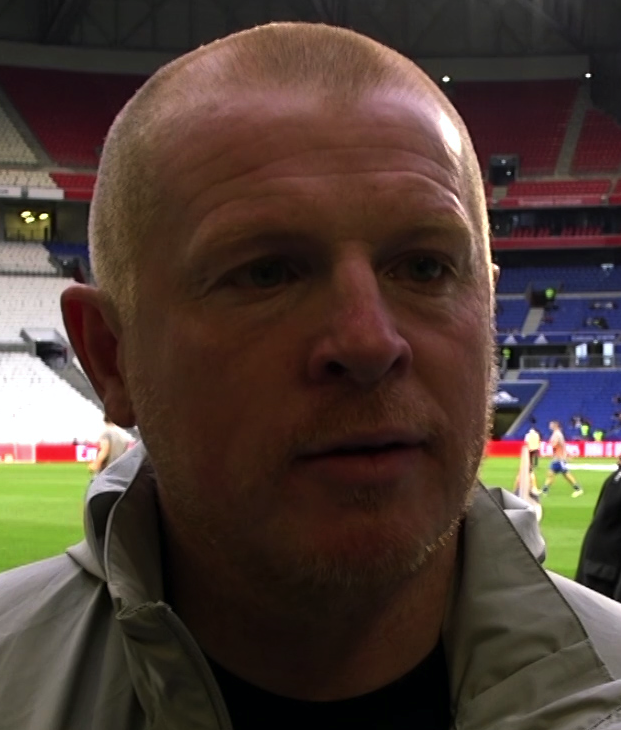 THE THINKER…Neil Lennon was left with a lot to ponder after the loss in Lyon.

Dembele simply peeled off the static back lot to rise unchallenged to nod the ball away from the stranded Scott Bain at his right-hand side.

It was an absolute shocker from the Parkhead outfit who failed in the basics of defensive play, but it was obvious the new-look side were still getting to grips with the formation

There had been a slight surprise prior to kick-off when Bain was given the nod instead of Conor Hazard. Neil Lennon had intimated he would go with the team that completed the 1-1 draw with Nice on Thursday.

However, the Scotland international No.1 was in at the start with the Irishman on the substitutes’ bench.

Practically Bain’s first touch was to fish the ball out of the net. To be fair to the Hoops, they attempted to reorganise very swiftly against a sweet-moving French outfit who were breaking at pace on the flanks.

But only the woodwork denied Lennon’s side the equaliser in the 15th minute after the hard-working Patryk Klimala had been clattered about 25 yards out. 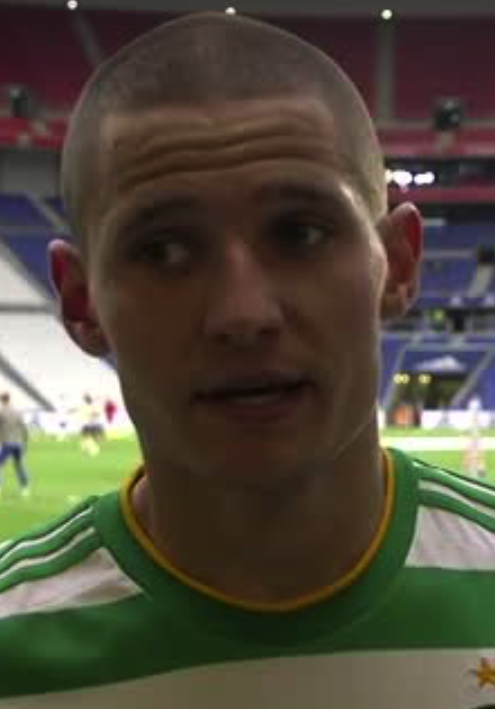 POLE-AXED…Patryk Klimala was on the receiving end of some hard challenges.

Olivier Ntcham, captain at the start instead of the benched Scott Brown, clipped in the deadball award that took a deflection off the wall to send the ball spinning away from the wrong-footed Anthony Lopes.

The keeper was relieved, though, when the effort smacked against the inside of his right-hand post and bounced to safety.

Klimala was putting himself about as he did his utmost to impress and he was the target for a few fouls from the opponents, most notably a wayward challenge from Brazilian defender Marcelo that should have earned him at least a yellow card.

The Polish striker was brought down again as Celtic claimed a penalty-kick. However, VAR, as it did against Nice when it disallowed an Odsonne Edouard strike, ruled against the visitors once more and a free-kick was awarded just outside the box. Nir Bitton hit his attempt into the defensive wall.

Ismaila Sno did manage to have the match official reaching for a card when he saw yellow after a thumping challenge on Dembele after he had raced away from Bitton. 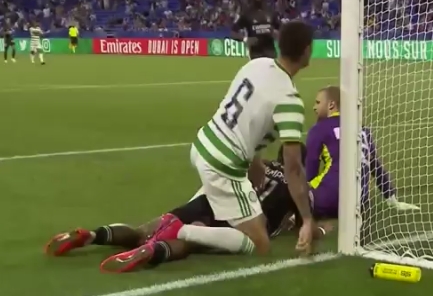 THAT SINKING FEELING…Nir Bitton and Scott Bain are beaten by Memphis Dupay at the second goal.

Memphis Dupay claimed the second five minutes from the interval after Bolo Bolingoli had been eliminated following a long crossfield pass. The left-back’s awareness was woeful and the French took full advantage when they broke towards the bye-line.

The former Manchester United striker timed his run to the near post to perfection, got in before Bitton  and cleverly flicked the ball beyond Bain who had been left totally exposed again.

Schoolboy defending had proved costly to the Hoops for the second time at the home of the hosts.

Just before the interval, Euan Henderson tried his luck from inside the box, but Lopes was alert to the danger and threw himself to the right to beat the ball away.

Three times in the opening five minutes of the second-half, Bolingoli surrendered possession to the French to present them with opportunities of a breakaway.

In the 53rd minute, Lennon’s side got a break when they were exposed down their left side again, but this time the finishing effort thumped against the woodwork and ricocheted to safety.

Just after the hour mark, Lennon made his anticipated changes as he put on 10 outfield players – the men who played against Nice – but continued with Bain in goal.

THE FLASH…Mohamed Elyounoussi zips in the solitary Celtic strike.

Right away, there was a swift interchange between James Forrest and Elyounoussi 20 yards out with the Norwegian international sending in a low drive that was well collected by Lopes.

Forrest was booked for a sliding challenge before Jeremie Frimpong raised Hoops’ spirits with a mazy run on the right before he was crowded out by a posse of defenders.

Christopher Jullien was slack with a pss out of defence in the 81st minute that presented Dupay with a header from a right-wing crosss, but the Dutchman flashed his header wide.

Then came Elyounoussi’s superb run and finish in the 85th minute to at least give the Hoops some sort of consolation.

Celtic conclude their three-game tour of France with a trip to the capital for a meeting with Paris Saint-Germain on Tuesday. It promises to be an interesting duel for the Scots – the Ligue I champions have scored 17 goals in their last two warm-up encounters.