Celtic Quick News on News Now
You are at:Home»Latest News»MAEDA TO THE FOUR
By CQN Magazine on 14th May 2022 Latest News

DAIZEN MAEDA has agreed a four-year contract at Celtic, as CQN reported earlier in the week.

It was hardly a surprise that the 24-year-old Japanese striker would remain at Parkhead along with countrymen Kyogo Furuhashi, Reo Hatate and Yosuke Ideguchi.

His short-term temporary transfer came with a compulsory purchase stipulation and all four of Ange Postecoglou’s recruits from the J-League will see their deals expire on May 31 2026 which means the Hoops fans will see the best of the exciting international quartet.

Maeda, who had been bought for Yokohama F Marinos in February last year, arrived on Hogmanay along with midfielders Hatate and Ideguchi. 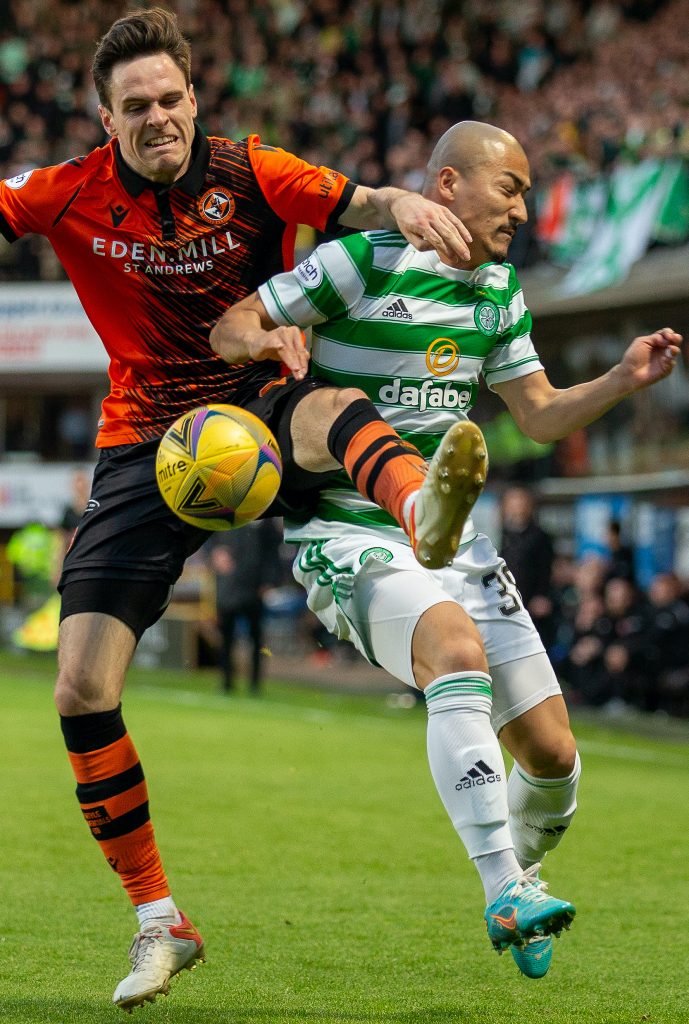 CRUNCH…Daizen Maeda is challenged by Dundee United’s Liam Smith at Tannadice in midweek.

Asked about the pacy frontman’s situation, Postecoglou, speaking to Celtic TV, said: “Daizen will absolutely be here. It was more of a technicality. He was always going to be with us long term.

“There was no issue around that. It was just the way the deal was structured with Yokohama.

“He’s signed for four years, so he’ll be here for the future.”

Maeda has claimed eight goals, including one in four minutes on his debut in the 2-0 win over Hibs at Parkhead on January 17, and his selfless running has made him a key member of the first team squad.