Magners today underlined its continuing domestic and international ambitions by announcing a four year extension of the partnership with Celtic Football Club, which will see their backing of the Scottish Champions run until the end of season 2019/20.

The leading Irish cider brand will continue to feature on the famous green and white hoops, in a partnership that will cement their backing of the Scottish Champions over a seven year period.

Manners, which has featured on the front of the Hoops’ jersey since 2013, will adopt a new position across the shoulders on the back of the jersey from the start of the 2016/17 season. The Magners name will also continue to appear on the club’s training kit. 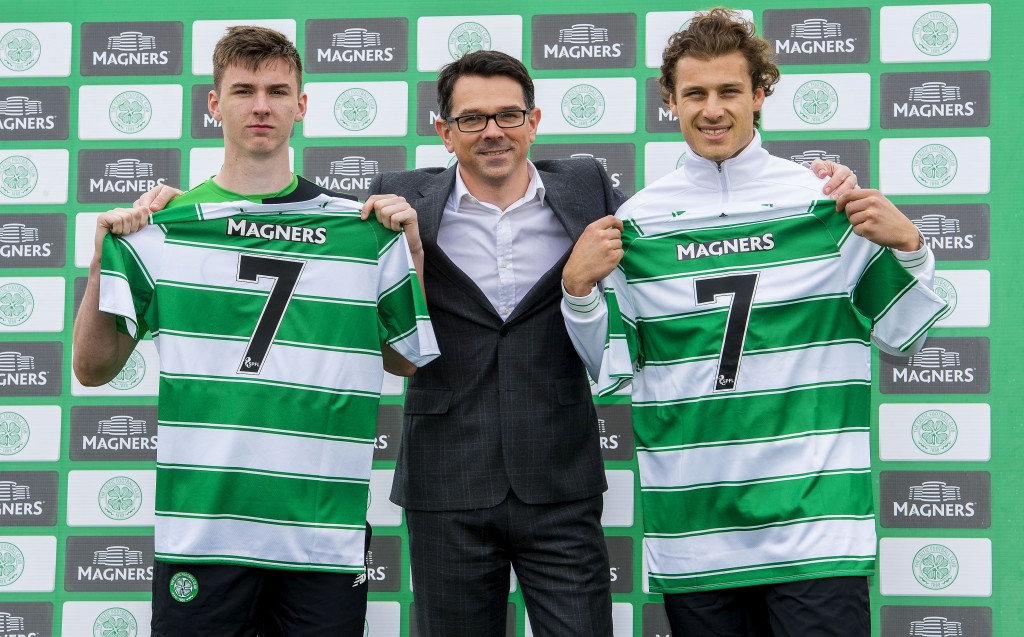 Paul Condron, Marketing Director for Magners, said: “Magners has enjoyed three fantastic years as the shirt sponsor of Celtic FC and we’re very proud to extend that partnership in a deal that will see our association with the club stretch to seven years – a number with great significance in the club’s illustrious history.

Since 2013, we’ve worked closely with the club in a number of areas – from support of the team and fans to the valuable work of Celtic FC Foundation and we’re very much looking forward to continuing this over the next four years.”

Celtic Chief Executive, Peter Lawwell, commented: “Today’s announcement is great news for both the Club and our fans and means we will enjoy at least a seven year partnership with Magners, a magnificent brand and a strong and passionate supporter of both the Club and our charitable dimension.”

“As Champions of Scotland and one of the world’s great football clubs, Celtic continues to be a highly sought after partner for many major brands such as Magners.

“As we aim for our fifth consecutive title we are very pleased to be able to make such an important announcement of long term continued support and partnership, something which is highly positive for the Club as we look to next season and beyond.”

Since beginning its partnership with Celtic in 2013, Magners has implemented a range of activity – from the Magners Magnificent 7’s tournament to the unique opportunity to feature in the match-day squad – all designed to enhance the fan experience.

Magners has also acknowledged the valuable work of Celtic FC Foundation, working closely with the club and its charitable arm to deliver the Magners Goals for Charity initiative.

The scheme helped to raise over £18,000 with the money used to fund The Magners Employability Project, a bespoke 10-week course targeted towards adults aged 25 and over who are registered unemployed, with a focus on developing skills in the hospitality industry.

Importantly for Celtic supporters this deal, and also the new main shirt sponsorship deal which will be announced shortly, are unique to Celtic FC are are NOT tied into a wider deal with any other club alive or dead.

While some supporters will also complain about two sponsors appearing on the Celtic jersey for the first time, the club, in the absence of a decent TV deal, does have to produce income wherever possible to allow us to compete on a European stage. If it helps get us to the Champions League then why not?