LEIGH GRIFFITHS has been paid off by Celtic with five months of his contract still to run.

And former Hoops team-mate Kris Commons insists the 31-year-old striker is “damaged goods” while his career is in tatters.

Griffiths is now likely to complete the season with Dundee on reduced terms after the Tayside outfit were about to trigger a break in his loan deal and return the former Scotland international hitman to the Parkhead club.

The attacker, who was signed by Neil Lennon from Wolves in January 2014 for £1.1million, scored 123 goals for the team before agreeing a season-long loan switch to the Dens Park men in the summer.

However, the move has gone sour and the Dee hierarchy have been far from impressed by his performances with only two goals in 14 appearances. 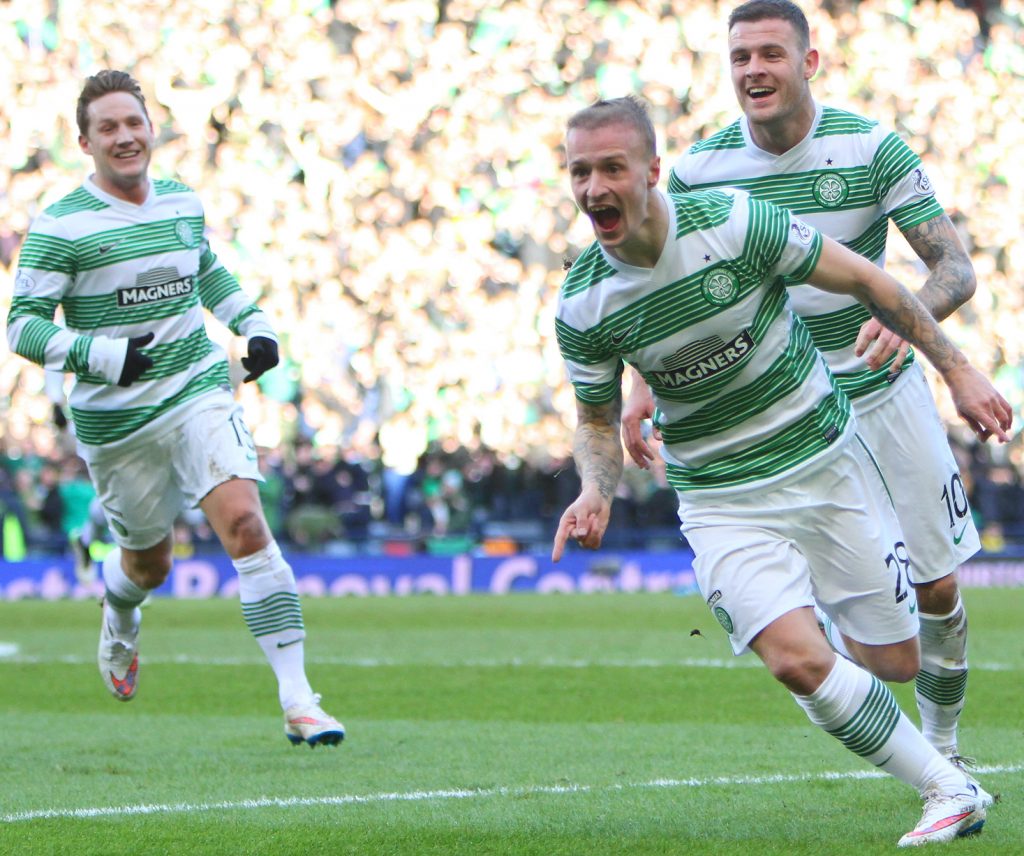 JOY BHOYS…Leigh Griffiths celebrates opening the scoring against the Ibrox side in the League Cup semi-final at Hampden on March 15 2015. Kris Commons and Anthony Stokes are about to join in.

Now the saga has taken another turn with Ange Postecoglou making it clear the player had no future in the east end of Glasgow.

Griffiths and Commons played together at the Hoops from 2014 to 2016, but the ex-international midfielder believes his former colleagues lack of professionalism has led him to this crucial stage of his career.

Commons said: “In Leigh Griffiths’ case, you’re now looking at every person he’s worked under over the past seven or so years stating that he’s not behaved like a professional. I’m sorry, but they can’t all be wrong.

“Leigh is 31 now. I was about his age when I had my best season in football and won Player of the Year. Instead, he is damaged goods.

“Listen, you’ve got to have huge sympathy for anyone who has endured the kind of mental health issues he’s had. He went through hell. 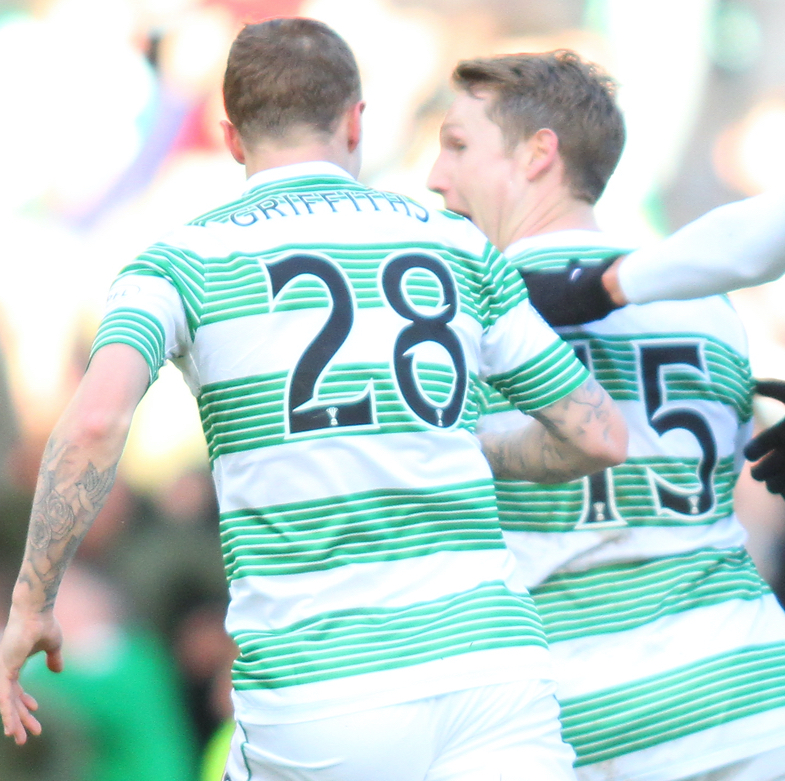 HOOP HOOP HOORAY…Kris Commons is about to be congratulated by Leigh Griffiths after scoring the second goal in the League Cup semi-final almost seven years ago.

“But you can’t use that as an excuse for all the fitness problems and injuries he’s suffered for so long. It points to something else behind the scenes as to why it’s not happening for him as a professional footballer.”

Griffiths has place in Scotland folklore following his two remarkable free-kick goals – scored against current Celtic No.1 Joe Hart – in the 2-2 draw with England at Hampden in 2017.

Those two strikes came at the completion of a campaign in which he claimed 18 club goals in 38 games across all competitions.

The year before he smashed in 40 goals in 51 appearances in a phenomenal season for Ronny Deila.

Commons, writing in his Daily Mail column, continued: “The fall from grace from him scoring those two goals for Scotland against England to where he is now is just remarkable. 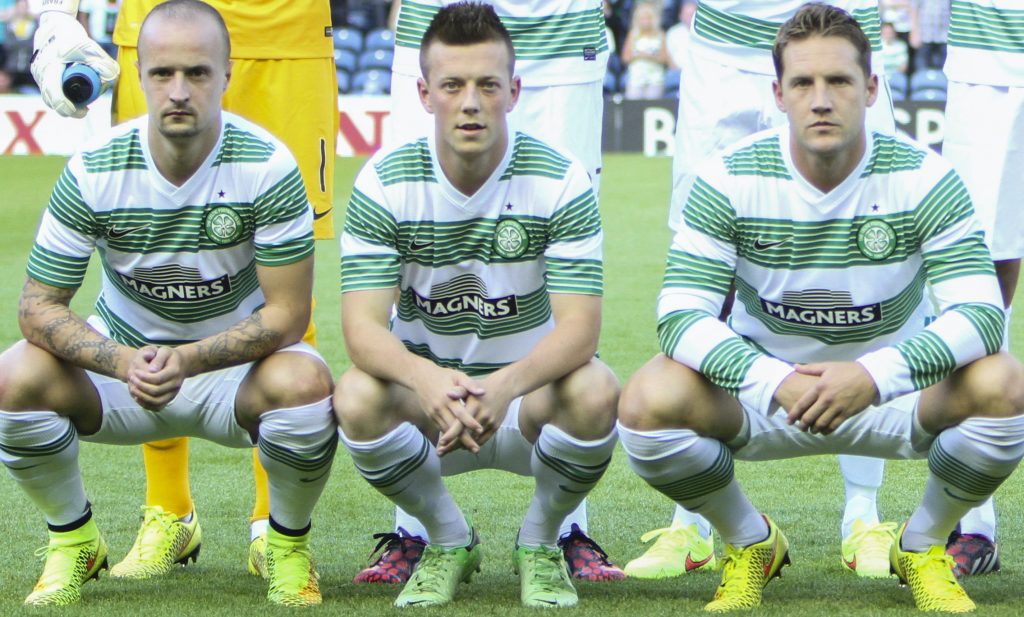 READY TO GO…Callum McGregor is flanked by Leigh Griffiths and Kris Commons as they prepare for the kick-off against KR Rekjavik on July 22 2014.

“It’s not down to bad form and not scoring. It’s purely down to a lack of application Monday to Friday.

“He now can’t get into a team. And, on the rare occasion he is, he’s just not scoring goals.

“I shared a dressing room with him and I was close with him – but not to the extent that I knew everything he was up to the minute he left Lennoxtown.

“He was the sort of guy who’d walk on to a training ground without any warm-up and start blasting balls into the net. He loved scoring goals. And as long as he was doing that in a game, it was hard to pick fault.”

Commons added: “What’s beyond argument is that he has achieved a lot in football. He’s in the top 20 of Celtic’s all-time goalscorers. He’s won loads of trophies. He scored those two iconic free-kicks for his country.

“He was quick, his movement was good, he was exceptional in the air for quite a small guy. He was physical, was lethal on free-kicks, he could finish and he knew how to roll his sleeves up. He also had supreme confidence in his own ability.

HAPPY DAZE…Kris Commons celebrates a strike for Celtic in 2015.

“But it could have amounted to so much more. He should be in the peak of his career. Yet it feels like he’s had more lives than a cat and they’ve now run out.

“No matter what anyone says, I don’t feel it’s too late for him to still do something, even if that’s not going to be at Celtic or Dundee.

“Look at Craig Gordon – two years out of the game and considering a career in punditry. Since then he’s won an unbeaten Treble at Celtic, been outstanding for Hearts for two seasons and could play in a World Cup just before his 40th birthday.

“Leigh could still have three years at the top level if he applies himself. The problem is that it’s no longer just about his talent. Managers now feel that they can’t rely on him.”