Mark Twain had a knack for overstatement, but you wonder if there was ever a golden age of the newspapers, and if so, what it looked like.  In Scotland, it’s seldom looked like it has this week.

Some weeks ago, Graham Spiers, writing in The Herald, made reference to comments he claimed a Newco director made about the Billy Boys song.  Spiers didn’t name the director, but questioned the club’s board’s willingness to tackle offensive behaviour.

The Billy Boys were a Glasgow razor gang from the 1920s and 30s, named after their leader, Billy Fullerton.  Glasgow was one of the poorest cities in the industrial world, with high unemployment and mortality rates, squalid housing conditions and what we would now term disaffected young people who drifted into criminal gangs.  The Billy Boys were known as a Protestant gang (there were similar Catholic gangs) and started going along to watch Rangers, and singing their signature tune, in the 20s.

So far, so anthropologic.  The song, the gangs, the disaffected masses were a product of their time, but the song persisted through the decades, including the “up to our knees in Fenian blood” third line.  It was the mood music to employment practices at Ibrox from the 20s until 1989.

Scotland has changed enormously since then.  We are a genuinely plural society, not one scandalised by “mixed marriages”.  The vast majority of people don’t care who or what you are, boundaries have been pushed back, there is a fairly level playing field, no matter your creed or colour.  All of this change brought focus to the Billy Boys song, it’s not the mood music to modern Scotland, or to ANY Rangers fans I know.

I couldn’t care less about the song.  For me, it is a millstone around the neck of Newco, as it was of Oldco.  It drags them down to a place they can ill-afford to be.  It offends (not alone in football), has a criminal legacy (not alone in football), but it’s unique quality is that third line.  You can’t say that about any group of people anymore.

Spiers has put his neck on the block over sectarianism at Ibrox repeatedly over the years.  He wrote about his recent experience at Ibrox, expressed an opinion, and submitted his copy.

The club complained.  Football clubs complain lots about many things.  There’s a set answer newspapers give to these complaints: “It was an opinion piece”.  They never retract or apologise for “an opinion piece”.

I’m 100% certain The Herald’s first response to Newco was “it’s an opinion piece”.  This would normally have been the end of it, but on Wednesday The Herald issued an apology.

Spiers then became a blogger to explain “My opinion – as expressed in my column – was based on a truthful account of my meeting with a Rangers director.”

Who you believe is irrelevant for this topic.  The only relevance is that within a 24 hour period, The Herald and Evening Times group changed how they deal with criticisms of an opinion piece – and then used six degrees of separation to drag Celtic into a sectarian headline. 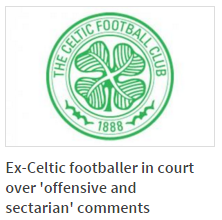 “Ex-Celtic player in dock for sectarianism”, screamed the Evening Times, using the Celtic badge into the bargain.  A woman is on trial for allegedly making a sectarian comment on Facebook.  She once played for Celtic under-19s, never the senior ladies team.  She doesn’t play for Celtic Ladies under-19s (or any age group) anymore, and didn’t a year ago when she made this comment.  She never held an employed position at the club.

An amateur, juvenile, registered with the club who are a member of the Women’s Association.  Fill your boots, Evening Times.  The apology will do them no favours with any constituency, it will cost them more readers in each than sticking to their guns would have.  Reacting by grasping onto something so tenuous to drag Celtic into the murky waters was unconscionable.

They do not report in this manner elsewhere.  Headlines for court appearances never lead with the person’s club memberships, “Prestwick Golf Club member in driving ban”?   You’ll never read this.

One very good political journalist once told me “The football content pays my wages”.  That being the case, The Herald’s already difficult job to survive has been enormously undermined.  Spiers also explained “the pressure brought upon the newspaper became severe”.  They can ill-afford to lose advertising revenue streams, or readers.

Napoleon once said, “‘Four hostile newspapers are more to be feared than a thousand bayonets”.  He’s been dead a long time, though.  Newspapers can now make themselves impotent in an afternoon.