Celtic Quick News on News Now
You are at:Home»Match Report»CELTIC 1 -3 ROSS COUNTY
By CQN Magazine on 31st January 2016 Match Report
CELTIC’S Treble dream was shattered for the second successive season in the most controversial of circumstances against Highlanders at Hampden.
There is a genuine feeling of injustice among the Parkhead ranks after this League Cup semi-final defeat against Ross County at a storm-lashed national stadium.
It was Inverness Caley Thistle who disrupted the charge towards all three domestic honours when they won 3-2 in the Scottish Cup semi-final during the last campaign.
Referee Steven MacLean played a massive part in that downfall – just as Craig Thomson did this afternoon.
Last season the match official denied Celtic a blatant penalty-kick after Josh Meekings’ handball from Leigh Griffiths’ header.
This time around, Thomson was quick to award a spot-kick in the 13th minute and send off Efe Ambrose with Ronny Deila’s side already a goal ahead in only 27 seconds.
It was an extraordinary turnaround in the club’s fortunes after threatening to run amok.
Griffith’s was the provider on this occasion as he ran free onto a Callum McGregor through pass and set up Gary Mackay-Steven to score into an empty net. 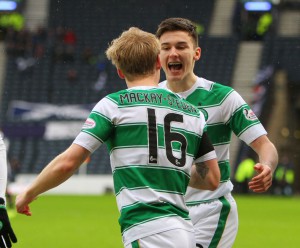 And Celtic’s top scorer had a chance a minute later when he latched onto an Ambrose ball. However, the normally-deadly penalty box predator got his feet in a tangle and the opportunity was gone.
The unfortunate Ambrose then had a header from a right-wing corner-kick hacked off the line by Richard Foster.
A few minutes later, the Nigerian international had an even better chance when McGregor swung in another inviting cross. This time he had a clear header, but carelessly nodded yards past the far post.
Celtic were only moments away from another Hampden horror story. Initially, Ambrose was slow to react to a through ball that ran onto Alex Schalk.
The defender tried to make up for his slackness with his challenge on the Ross County frontman.
There was only minimal contact, but referee Thomson thought it was enough to warrant a penalty-kick, immediately pointed to the spot and dismissed the baffled Ambrose. 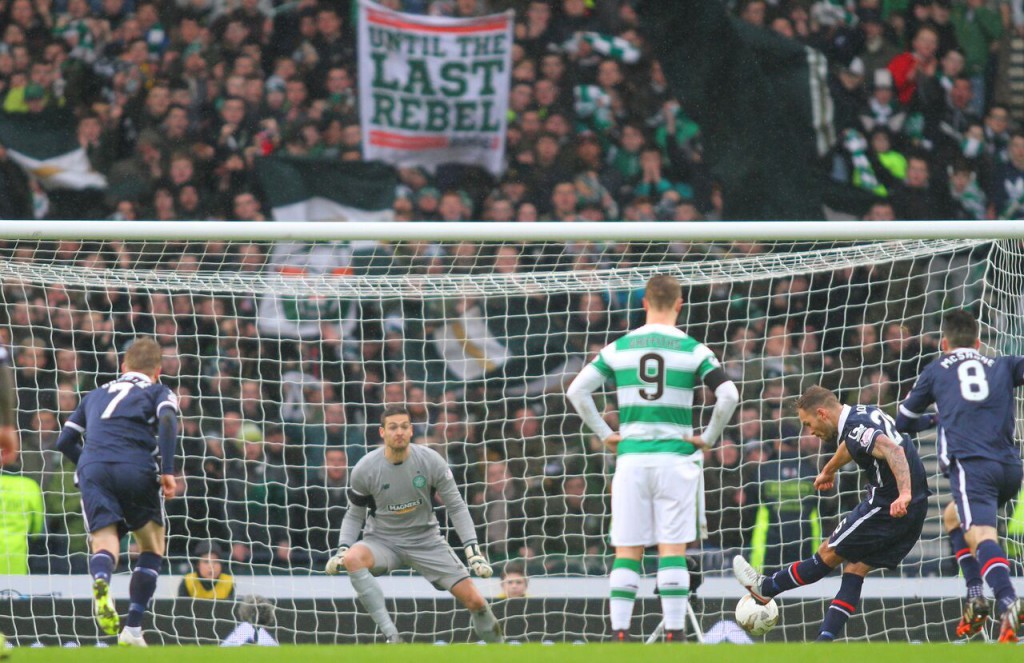 Martin Woods made no mistake with a thumping low drive into Craig Gordon’s left-hand corner as the keeper went the wrong way.
Deila had to act swiftly to patch up his central defence and withdrew McGregor and handed new Bhoy Erik Sviatchenko his debut.
In the 26th minute, Stuart Armstrong thought he had put the Hoops back into the lead with a sweeping drive from the edge of the box, but the ball rose just too high and  cleared the crossbar with Scott Fox struggling.
Gordon was called into action in the 33rd minute when he had to dive to his left to deal with a swerving 20-yarder from Woods.
Five minutes from the interval, Nir Bitton was dreadfully slow in his reactions after Fox had parried a header from Lustig. The shotstopper then flopped on the ball as Sviatchenko came in with a late challenge.
Only three minutes after the break, the Highlanders took the lead and, once again, Celtic had every right to believe luck was firmly against them.
TV pictures showed Schalk clearly holding Gordon as a right-wing corner-kick was swung into the box.

Andrew Davies got up at the back post and Paul Quinn, totally unhindered, was allowed to stroll away from Mikael Lustig and Bitton to power a header into the net.
Referee Thomson astounded the Celtic players and a huge percentage of the onlookers when he signalled a goal.
Just to make matters worse, the keeper was then booked for his protest. It was beginning to look like another Hampden heartache at this stage with little running the way of the champions.
In the 63rd minute, the 10-men Hoops were staring defeat in the face, something unthinkable after taking the lead inside half-a-minute.
Woods split Dedryck Boyata and Lustig with a neat pass and Schalk, who might have considered himself fortunate to still be on the pitch, took it in his stride before hammering a vicious drive high into the net leaving Gordon without an earthly.
Credit to Celtic, though. They refused to roll over and the Ross County goal led a charmed life on a couple of occasions.
Underlining that this wasn’t Celtic’s day, Griffiths missed a penalty-kick in the 76th minute after Jonathan Frank had handled a right-wing corner-kick.
However, the club’s goal m 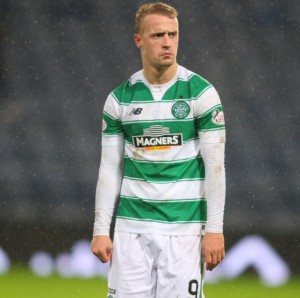 achine elected for power rather than precision and walloped his shot off Fox’s legs.
Gordon then made a brilliant save from a first-time volley by Jackson Irvine before Griffiths tried once more in vain to get the ball into the Highlanders’ net.
This time his low shot took a nick off a defender, Fox threw out his left leg and somehow the ball struck his heel and flew over the crossbar.
Scott Brown came on for the listless Bitton in the 66th minute for his first appearance in two months, but the skipper couldn’t inspire his team-mates on this occasion.
Dame Fortune snarled once again in Celtic’s direction and Deila now has to pick up the pieces – starting on Wednesday against Aberdeeen at Pittodrie.
TEAM: Gordon; Lustig, Ambrose, Boyata, Tierney; Bitton (sub: Brown 66), Johansen; Mackay-Steven, McGregor (sub: Sviatchenko 13), Armstrong (sub: Forrest 78); Griffiths.