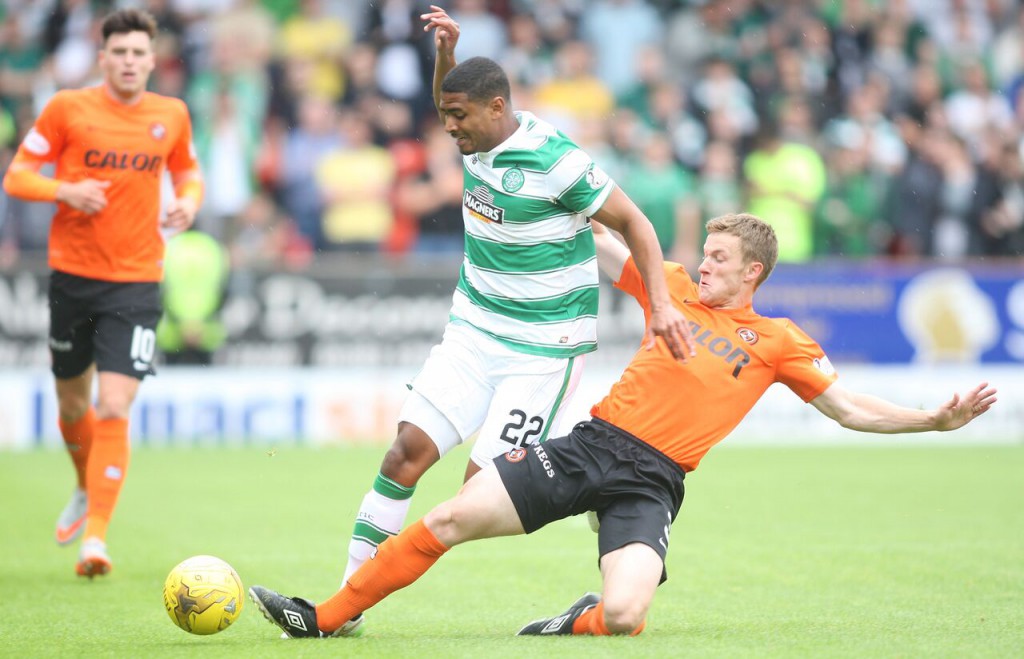 DUNDEE UNITED 1  CELTIC 3
ONE of the biggest cheers of a reasonably comfortable win for Celtic was reserved for the 67th minute when Scott Allan made his first appearance in the green-and-white hoops.
There would have been an even bigger one only seconds later if the new Bhoy had marked the occasion with an extraordinary goal against Dundee United at Tannadice.
Keeper Louis Zwick made a hash of a clearance and the ball dropped to the feet of a surprised Allan. The midfielder cleverly tried to lob the ball from an angle towards the top corner, but the German shotstopper recovered his composure and balance to claw the effort to safety.
There was no way Allan’s debut was going to pass without incident and he was booked in the in the 83rd minute for a foul on Aidan Connolly.
In between, he showed some neat touches and will be a welcome addition to the first team squad over a long and difficult season.
Only Emilio Izaguirre and Leigh Griffiths kept their place from the team that started against Malmo in midweek with Ronny Deila, as expected, making wholesale chances with Tuesday’s Champions League second leg in Sweden very much in mind.
Coincidentally, it was the left-back and the striker who combined as the Hoops took a deserved lead in the 17th minute.
Charlie Mulgrew slipped a short pass to Izaguirre who swiftly spotted Griffiths preparing to make a run. He picked him out with an excellent through pass and the in-form striker sprung the offside trap as he turned away from his defender, raced in on goal, sidestepped Zwick and, from a tight angle, rolled the ball into the net. 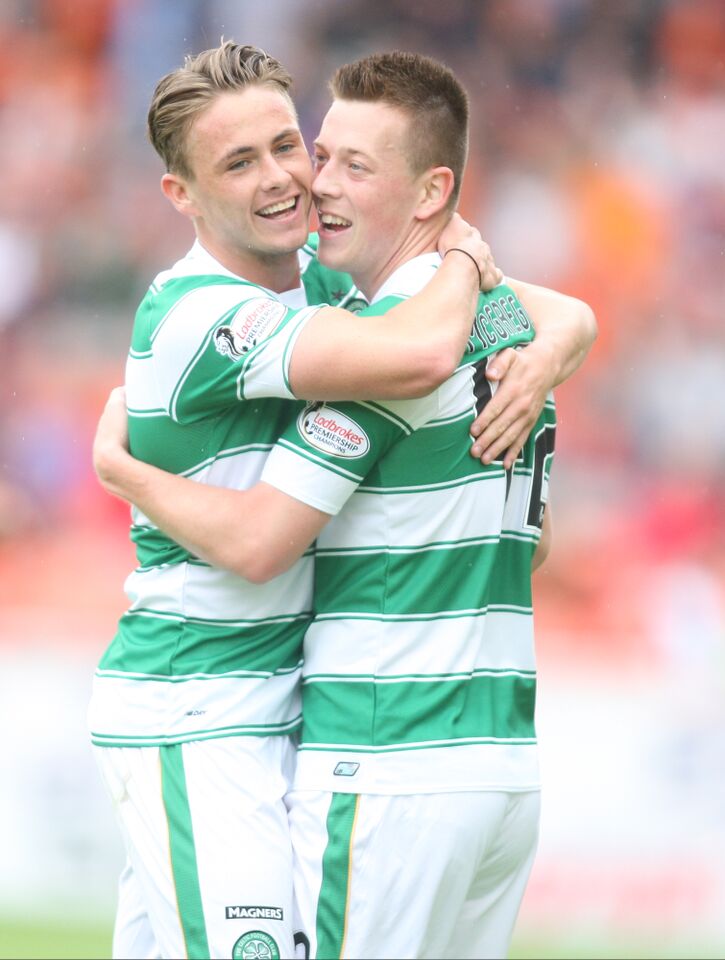 Celtic, in fact, could have opened the scoring in the fifth minute when an opportunist’s effort from Kris Commons was hacked off the line by Mark Durnan.
Deila’s men controlled the first half-an-hour and had five attempts on target while United, remarkably, had only one in the entire first-half – and it was enough to give them a goal with the last kick of the opening 45 minutes.
Before that, though, Commons might have scored when Anthony Stokes set him up after a left-wing cross. The midfielder hammered his final effort off Zwick.
In the 21st minute, the shotstopper denied Commons again when he dived low to his left to push a wicked drive round the post.
Two minutes later, Logan Bailly, making his first competitive appearance, was sloppy with the ball at his feet as Robbie Muirhead put on the pressure. United appealed in vain for a penalty before the keeper hacked the ball clear, but it looked as though the big striker had gone to ground far too easily.
Mulgrew was then yellow-carded after a challenge on Ryan McGowan as Jackie McNamara’s men tried desperately to get back into the contest.
However, in the 38th minute, Celtic almost doubled their advantage after a searing breakaway raid. Gary Mackay-Steven sent Griffths through, but Zwick made an excellent save to thwart the livewire hitman.
A minute from the interval, the Parkhead men got the inevitable second goal. All-action Griffiths put Commons in the clear on the right and then took off at speed to get into the penalty box for the anticipated cutback.
Commons tried to pick out the attacker, but United centre-half Durnan lunged to cut off the pass and only succeeded in diverting it past his helpless keeper for an own goal.
Amazingly, though, United got one back one minute into added-on time in the first-half. Efe Ambrose needlessly brought down Scott Fraser when he should have stayed on his feet. Referee Willie Collum produced another yellow card and awarded a penalty-kick.
Chris Erskine sent Bailly the wrong way and the match official instantly blew his whistle to signal the break.
On the hour mark, Mulgrew came off with Callum McGregor taking his place and the game kept moving at pace. It was no surprise when McGowan was booked after a foul on Eoghn O’Connell shortly afterwards.
Then came the introduction of Allan and his near miss only seconds into his Celtic career. A couple of minutes later, Ryan Dow was cautioned after a sneaky kick at Celtic’s new midfielder from Hibs.
McGregor claimed the killer goal in the 74th minute after a stunning move by the Hoops as Ambrose sent a ball to Stokes on the left. His long-range pass was brought down expertly by Mackay-Steven who knocked it inside for the substitute. McGregor hit it well enough and it took a deflection before flying into the net.
Only seconds after that, Bailly thwarted Erskine’s angled drive with an outstretched right foot as McNamara’s men tried to mount an instant reply. Joe Thomson then replaced Tom Rogic, who had looked cool and composed in the engine room, taking over Scott Brown’s role.
Bailly had time to show off his athleticism in the closing minutes as he twice denied Connolly from identical 20-yard free-kicks. He punched the first one away at full stretch from just under the bar and he saved in equally spectacular fashion from another deadball effort from the same player. 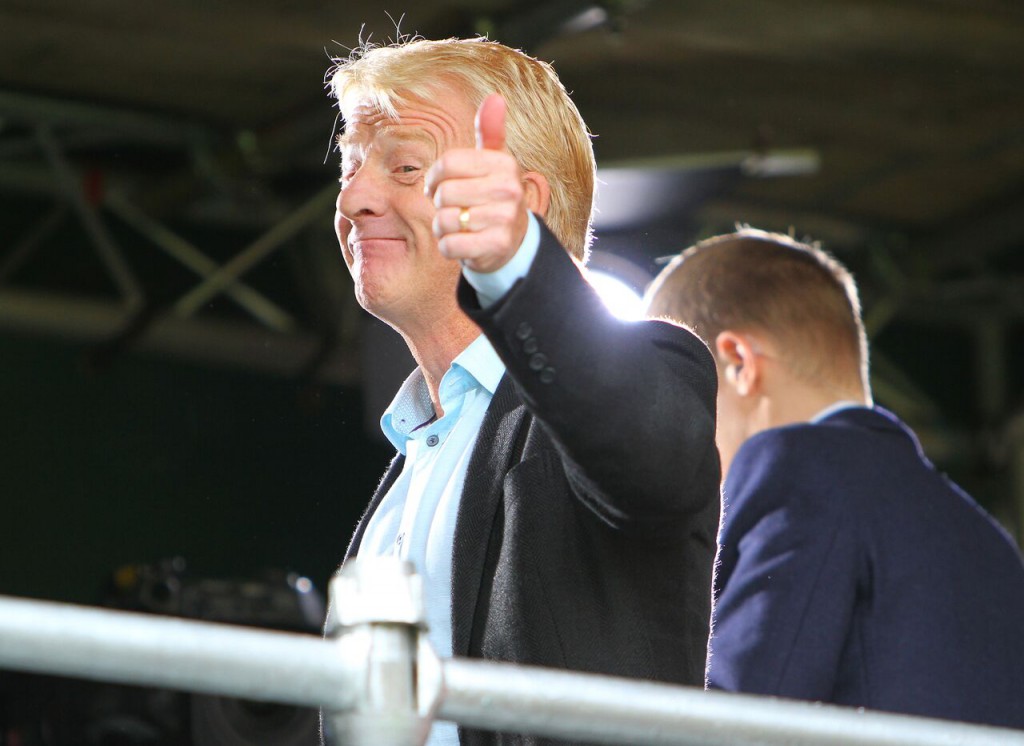 Stokes should have hit a fourth in the fading moments after being set up following a sweet move between Allan and Mackay-Steven, but he completely mishit his shot in front of goal and the chance was lost.
However, Deila will no doubt be satisfied with a competent all-round performance that also allowed him to give game time to youngsters such as Saidy Janko, O’Connell, Rogic, Thomson, McGregor and, of course, Allan.
Now the rallying cry must be: Bring on Malmo!
TEAM: Bailly; Janko, Ambrose, O’Connell, Izaguirre; Rogic (sub: Thomson 78), Mulgrew (sub: McGregor 60); Mackay-Steven, Commons, Stokes; Griffiths (sub: Allan 67).
Click Here for Comments >
Share. Twitter Facebook Google+ Pinterest LinkedIn Tumblr Email
Previous ArticleDundee United v Celtic, Live updates
Next Article DEILA ‘IRRITATED’ AFTER WIN