ANGE POSTECOGLOU is relishing the prospect of three Glasgow derbies in a month.

The Celtic boss watched his side overcame Dundee United 3-0 at Tannadice last night to set up a Scottish Cup semi-final encounter with Giovanni van Bronckhorst’s Ibrox side at Hampden on the weekend of April 16/17.

A fortnight before the clash at the national stadium, the teams will lock horns in Govan in their third Premiership meeting of the campaign.

And there is also the possibility of another league game at Parkhead after the split.

Asked about the testing times against their city rivals, Postecoglou said: “Mate, they’re just games of football you need to win. The most important thing is that we’re putting ourselves in a position where those games mean something. 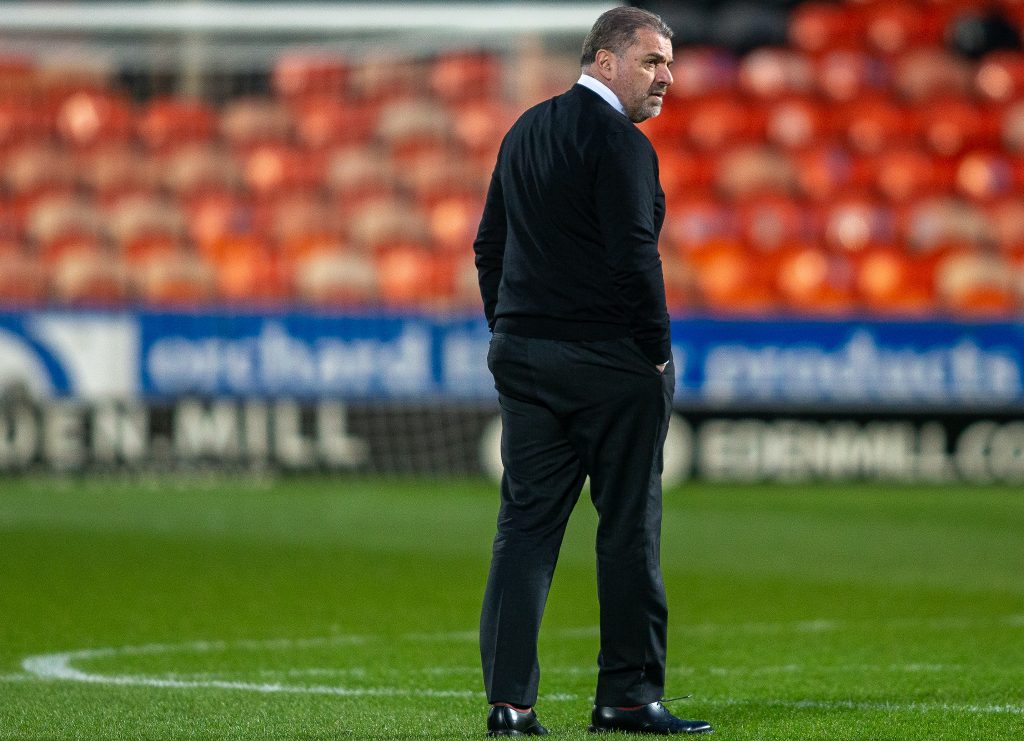 CALM BEFORE THE STORM…Ange Postecoglou gives the Tannadice playing surface a once-over pre-kick-off. 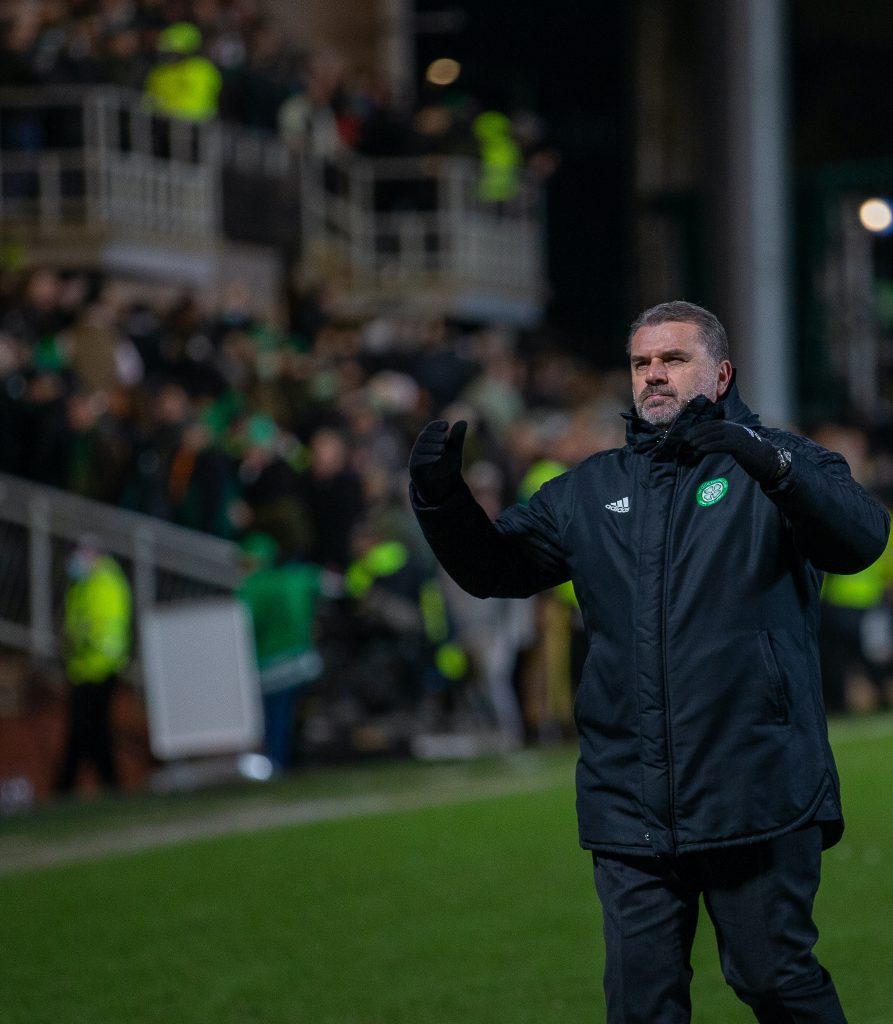 FANFARE FOR A WINNER…Ange Postecoglou acknowledges the Celtic support after the 3-0 triumph.

“We focus on the next challenge and don’t look too far ahead.

“It’s going to be great. It will be a cracking atmosphere. I’ve had two trips to Hampden and in both those games the atmosphere was unbelievable. I’m sure it will be a great atmosphere again for that semi-final, but we’ve got a few games before that to focus on.”

A double from Giorgos Giakoumakis following the opening striker from Callum McGregor saw off a spirited United in Tayside as the Hoops replicated the scoreline in their last visit on points-collecting business back in December.

With the Premier Sports League Cup already in the trophy cabinet after the 2-1 success over Hibs six days before Christmas, Postecoglou quipped: “At the start, it was all trouble, now it is all treble.

“The important thing is that we are still in the competition and at this stage of the season we have given ourselves an opportunity for success.

“That is the expectation here. That expectation is on me and everyone at the football club. The players need to embrace that.

NUMBER TWO…Giorgos Giakoumakis is flat out as Matt O’Riley and Daizen Maeda congratulate him. Benjamin Siegrist sits this one out.

“We can’t think just because we have won a trophy already that it is going to be a good season. We want to win EVERY competition we are in and give ourselves a chance to do that.

“Particularly at this end of the season and we have given ourselves a chance. It should also help with the confidence.”

The Greek-Australian gaffer, speaking to the Daily Record, continued: “We’ve got Rangers, so on we go. It will be massive. That was the prize on offer, to get through you’ve got a semi-final at Hampden and, irrespective of who you play, it’s going to be a massive game.

“That’s the reward for a really good performance by the boys.”

The Hoops took their unbeaten domestic run to 30 games and Postecoglou added: “We’re going okay, but the key thing now is to finish our stuff off. We’re in a position now where we can challenge. 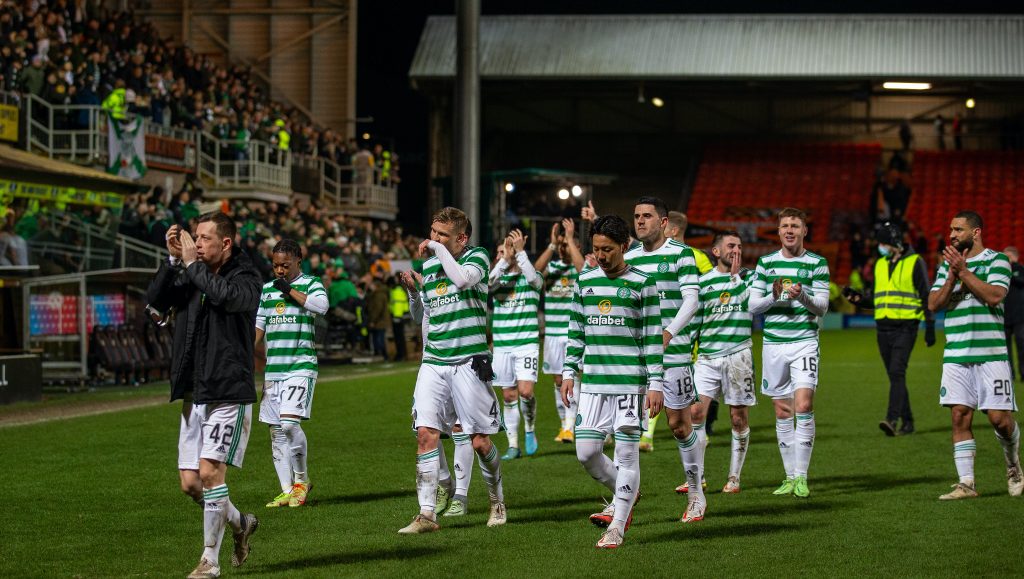 A BIG HAND FOR THE SUPPORT…Callum McGregor leads the Celtic players as they applaud the efforts of the fans following their non-stop encouragement.

“There are still eight games to go in the league. We’ve just got to tackle each challenge the best way we can. We’re getting players back and our training’s really good – they’re the kind of things we need to focus on.

”After a rocky start, our away form has been outstanding. We’ve been to Edinburgh four times, Aberdeen twice, Livingston twice, we’ve come here again – all tough away fixtures – and the boys have handled it really well.

“Away from home, we’re still controlling games and trying to be the team that takes it to the opposition. We don’t take it for granted winning away – it’s not easy away from home. Being able to handle that has probably been the most important part of our season. “

Postecoglou and his players are now turning their focus to the visit of Ross County on Saturday.